I met my husband on eHarmony | Inquirer Lifestyle ❮ ❯ 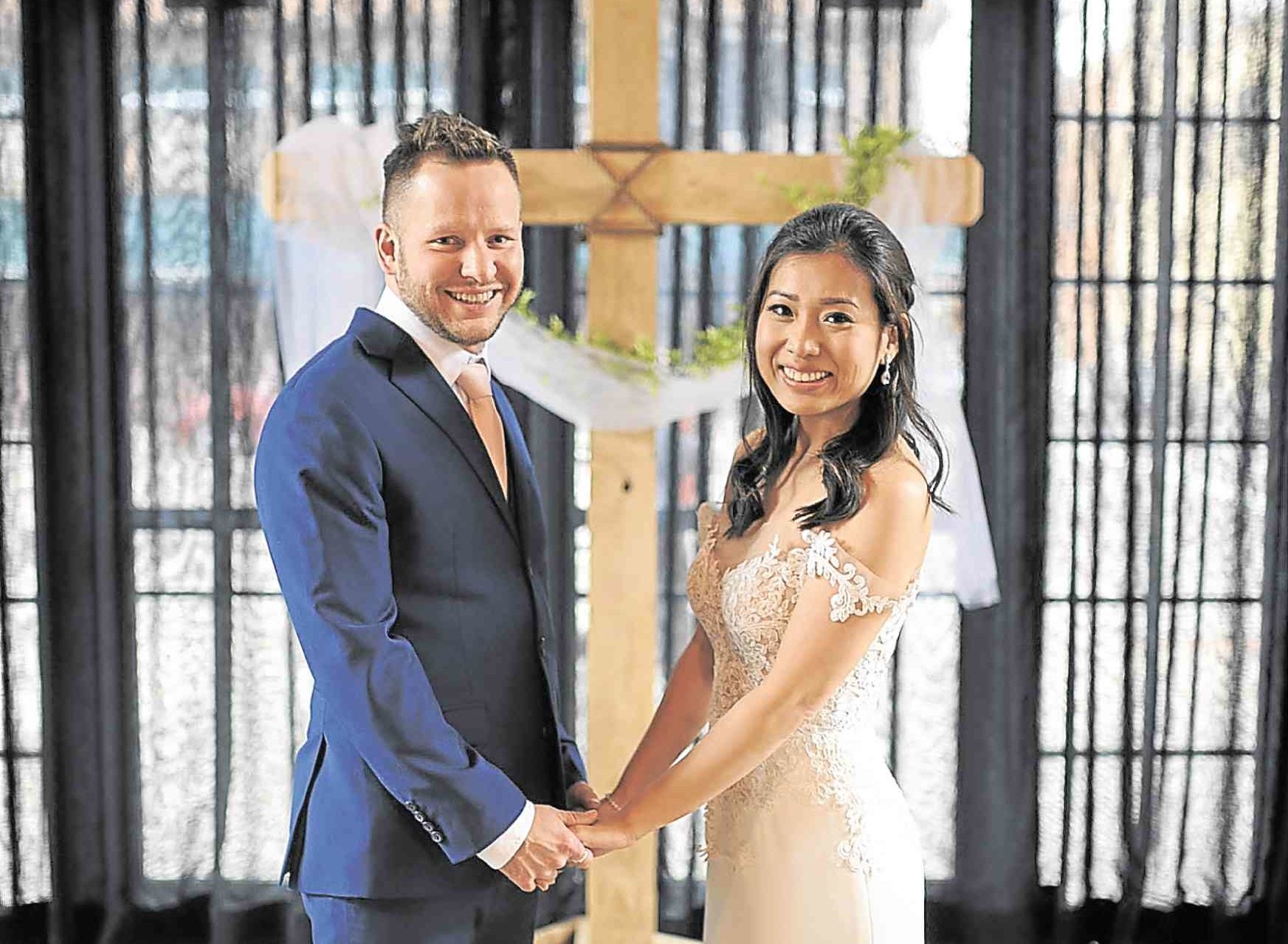 Dan and Lani say I do.

I met my husband on eHarmony

I was waiting inside the T3 airport, a ball of mixed emotions. One minute I was really excited and the next minute really nervous. The flight from Japan had just arrived and I thought, “Oh, he’s really here!” I felt weird because it was if I knew the person I was about to see but also didn’t. Here’s this guy whom I’ve spoken to for months and have gotten to know well through chats and calls. This was the first time we would see each other in real life.

I searched for him in the crowd and, just when a throng of Japanese people came out, I spotted him… two pieces of luggage in hand, wearing a light blue shirt, looking for me. I called his name, he tried to find me in a sea of people with black hair and he finally saw me and came to me. We looked into each other’s eyes for the very first time.

Almost a year later, we again looked into each other’s eyes, this time saying our vows in front of family and friends. I am now married, to the man I met online. And I literally left everything I know and moved halfway around the world just to be with him.

The very first time someone suggested that I try online dating, I was embarrassed and appalled. Me? Find a date online? I couldn’t possibly imagine myself doing that kind of thing. My first thought was I wasn’t that desperate and, two, what if whoever I talk to turned out to be a total creep? The idea made me feel awkward so I politely said, “No, thank you.”

But a few months later, I had two other friends who encouraged me to try the site eHarmony (www.eharmony. com). I still felt completely weird about it but I thought, what could I possibly lose? I had already said yes to friends who set me up on group dates, blind dates and casual meet ups with friends of friends of friends from other churches. But I just knew all of the guys I met weren’t the right one for me. What is one more embarrassing thing to do?  I gave it a try.

I filled out an incredibly long questionnaire that seemed worse than a college application. I even had to pay for it. My expectations were low, even zero. I highly doubted I would meet anyone and, in the far-fetched chance I did, what are the chances I would successfully online date?

I was on it for a few months and it wasn’t fruitful. I found myself scrolling through people I was matched with and rolling my eyes or shaking my head. I could totally tell even just from the profiles that we wouldn’t be a good fit. What a total waste of money, I thought.

Then one day, my phone dinged, notifying me that I had gotten a message from this guy named Dan from Austin, Texas. I checked out his profile and thought, not only was he cute but it seemed that we believed in the same things. We both held our faith as supremely important and we had a lot in common.

It caught my attention that the recent book he read was the autobiography of hip-hop artist Lecrae. I used to DJ at Saved Radio that played Lecrae and I loved his music! I decided to reply to him, he replied to me, and back and forth it went until our messages progressively got longer.

I could tell from our notes and e-mails that there was something there. After two weeks, he said the mails were getting ridiculously long and we should do a video call instead. I remembered feeling so nervous but we ended up talking for hours! Although I was attracted to him and felt our undeniable connection, I tried not to get too carried away. But days progressed to weeks and the weeks to months and we were still talking and enjoying each other a lot. On our second month of talking, he told me that he really liked me and he would book tickets to Manila just to see me!

After three months of talking, he flew to the Philippines from the United States. This was when I met him for the first time at the airport. He spent his time in Manila with my family, friends, mentors and churchmates. They all thought he was great and funny and… normal. A friend remarked, “You can actually meet normal people online!” I guess not everyone in the online world is creepy after all! They all loved and adored him.

Three months later, I flew to the US to meet Dan’s family and friends and experience what his life was like. All of them were super nice, supportive and really welcomed me. I felt comforted once again when they had nothing but great things to say about him. I could tell from my conversations with Dan that he was genuine and honest but it’s another thing to be validated by the people around us. It was after this trip that we both felt even more sure about each other. Two months after the US trip, he came to Manila secretly and planned a surprise proposal with the help of family and friends.

Some people remarked how fast it was and asked if we were really sure. The great thing about online dating and the long distance was that we spent all this time just talking and getting to know each other. Like, what else can you do really but talk? It also helped avoid physical temptations that were important to us and to our faith. Despite the distance, our relationship matured. However, our circumstances weren’t easy. We were battling with horrible Skype calls, different time zones, uncertainty with visa and documents. It was incredibly challenging and caused lots of tears and frustration but we also grew in patience, faith and prayers.

After almost a year since Dan came to Manila and proposed to me, we got married in Columbus, Ohio. It was a beautiful sunny day and I witnessed many little miracles that led up to that moment. Here we finally were and God orchestrated all of it and made things beautiful! Our fight with the long distance was finally over!

A lot of people have asked me: Does online dating really work? I am in no way an expert since I only tried it once and was fortunate that Dan and I found each other. Thankfully, it worked for me. It did too for Dan’s best man, who also met his wife via eHarmony. After I met Dan, two of my other friends signed up on eHarmony and also met someone. There are tons more who have found success online.

In the beginning though, I was very doubtful and rightfully so. You really don’t know how safe it is and how truthful the other person is. There are a million things that can go wrong and there are many horror stories. Although more people are open to it now, there’s still a lot of doubt and fear involved when it comes to online dating, especially in the Philippines.

Does online dating really work? Well, I suppose it all depends on you. The first step is to come in with an open mind because you will never know until you try. Online dating doesn’t guarantee you a relationship, it simply provides the opportunity to meet people outside of your current sphere, people you can’t possibly meet in the conventional way.

There are a lot of good people who are genuinely just seeking the right person and online dating allows you to expand those borders. However, it’s best to proceed with a lot of caution and whole lot more wisdom. Be accountable and involve your circle of family, friends and mentors in the relationship, too.

There are different love stories, each one unique and special. Ours just happens to be a girl from the Philippines and a boy from the US who met in the middle through the online world. All love stories are equally beautiful because they bring two different people together. That alone is a miracle in itself.