Meat with a side of geopolitics in Belgrade's eatery | Inquirer Lifestyle ❮ ❯ 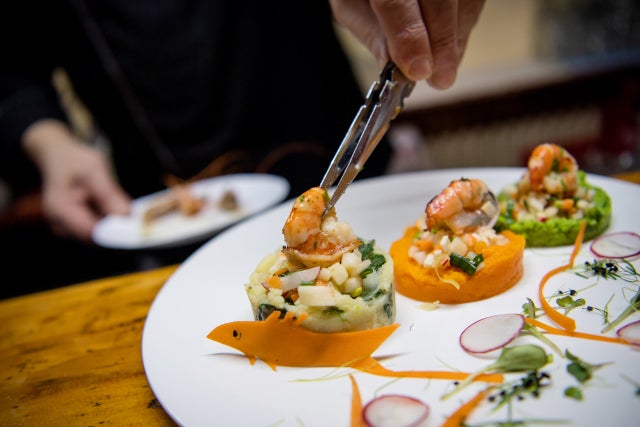 One Sunday families filled the Belgrade tavern for a meal not normally associated with the Balkan state’s meat-heavy cuisine: black tiger prawns drizzled with a zesty orange sauce.

It was billed as the national dish of Palau, a little-known archipelago in the Pacific Ocean that last month became the latest country to revoke recognition of Kosovo, a former Serbian province.

“Now everyone in Serbia knows Palau,” said Vojin Cucic, the 29-year-old owner of Korcagin, which every Sunday serves a speciality from a country that rejects Kosovo’s statehood.

Two decades after the ethnic Albanian-majority province broke away from Serbia in a guerrilla war, the neighbors are still locked in a heated recognition battle.

Kosovo has been recognized by more than 100 countries, including heavy hitters like the United States and most of Western Europe, since its 2008 independence declaration.

But that’s only slightly more than half of the UN’s 193 member states, with the other camp including powerful nations like Russia and China.

Never mind that many of them are places most would struggle to find on a map — like the Union of the Comoros, Suriname and most recently Palau.

Big or small, they share a fan base at Korcagin, whose walls are plastered with Yugoslavia-era photos, flags and other memorabilia from a time when Serbia and Kosovo were part of one country.

So far, the cooks have prepared more than 70 foreign dishes, giving preference to the countries that have rescinded their recognition.

Cucic, who inherited the restaurant from his father, says he is motivated by patriotism.

“If the US would withdraw recognition, we would have three days of free drinks,” he says with a smile.

Pristina insists it is recognized by 116 nations.

“This is nothing but Serbian propaganda,” Jetlir Zyberaj, an advisor to Kosovo’s foreign minister, told AFP however, without delving into specific numbers.

The reality may be somewhere in between.

Some of the countries have affirmed their reversals, while others have not contested the announcements or responded to AFP requests for comment.

Last June, Serbia was left red-faced after announcing that Liberia had reversed its recognition, only to see the African country later issue a statement correcting the report.

It is not clear what other countries gain from their changes of heart.

Belgrade, whose foreign ministry refused to comment, often hails intentions to boost cooperation with the small states, but concrete details are hard to come by.

When asked what the small southern African nation of Lesotho received for its retraction, its foreign ministry told AFP: “Nothing apart from the normal bilateral cooperation between the two countries.”

“My children ask me often where each country is, but these countries have the same voting rights (in the UN) as does China,” Serbian Foreign Minister Ivica Dacic recently told local media.

Boban Stojanovic, a political analyst in Belgrade, says the recognition game reflects the government’s effort “to show the public that Serbia is doing something” about Kosovo.

“In terms of international affairs, these countries… don’t have any  impact on the general (status) of Kosovo,” he added.

For years Belgrade and Pristina have slogged through EU-led talks aimed at normalizing their ties.

In Serbia, Kosovo remains a powerful rallying cry for nationalists who see the former province as the cradle of their culture and Orthodox Christian faith.

“Even if every country in the world recognizes Kosovo, we still shouldn’t. Kosovo is ours,” Cucic said. CC

A flavor out of favor: Dog meat fades in South Korea