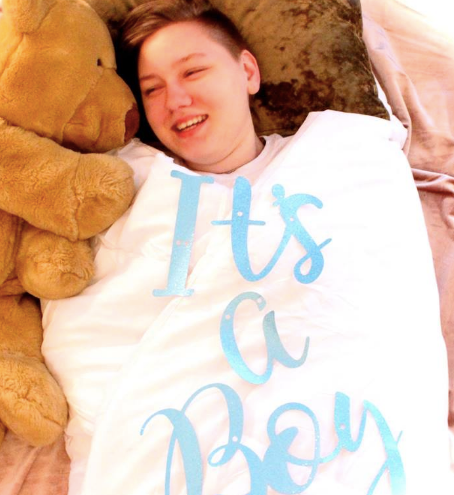 ‘I honor you’: Mom holds gender reveal shoot for coming out of transgender son

One mom from Louisville, Kentucky celebrated her son’s coming out as transgender by throwing a gender reveal photo shoot on his 20th birthday.

Adrian Brown had the full support of his mom Heather Lundberg Green when he came out to her as transgender. Adrian knows for himself that his mother is someone he can trust and count on, so he was not worried about coming out to her.

“I wasn’t as nervous as I probably could have been,” Adrian told BuzzFeed News on Feb. 11. “I knew that my mom would always support me no matter what.”

“Mom said, ‘OK, well I don’t really know what to do from here and we’ll figure it out together,’” he added.

Heather, being the supportive mom that she is, chose to celebrate Adrian’s coming out on his 20th birthday last January. She then took to Facebook to share the photo shoot they organized for Adrian, which saw him buried under a blanket that had the words  “It’s a Boy” written on it in one of the pictures.

“When your child comes out as trans, the best thing to do is create a photoshoot to celebrate the fact that he silently and bravely stepped out of the race that he never wanted to be in, found his own lane and proceeded to win,” Heather wrote on Jan. 30.

When your child comes out as trans, the best thing to do is create a photoshoot to celebrate the fact that he silently…

She also called Adrian the “most fascinating human” she knows.

“I will always be your biggest fan!” she told her son. “I love you, I honor who you are and I respect your courage to be unapologetically you!! Let’s celebrate!!”

And celebrate they did. In Heather’s other photos, Adrian can be seen holding blue balloons and a “Boy” signage in his hands while sitting inside a box. In another, he is seen popping red balloons filled with silver confetti.

Heather has since received messages from parents of transgenders asking for advice, but she maintained that she is no pro.

“I have to tell all these people that I’m not a pro,” Heather said in the report. “If I could write a parenting book, it would just have one page that said ‘love your child.’”

That’s all that matters. Cody Cepeda/JB

Transgender student in US left alone, barred from taking shelter during lockdown drill