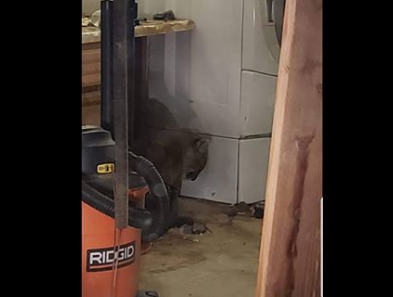 One family in Inland Empire, California was just going about its usual chores one day, peacefully doing the laundry, when they suddenly found a mountain lion in their company.

Sean Ishol recounted that while washing the clothes with his brood, he noticed his dogs whimpering while they were on the floor, reported KABC on Monday, Feb. 11

The man added that when he saw the lion nestled by the dryer, he first thought it was one of his kid’s toys.

“The mountain lion did put its paw out to let us know ‘Hey I’m here, I’m bigger than you, I will hurt you,'” Isihol said in the report. He then quietly exited the garage, but realized that his wife was still stuck in the room, as she tucked herself in a corner.

To help her get out, he grabbed a Polyvinyl chloride pipe, one used for pumping and drainage, and held it out to her, for her to grab on to while going out slowly.

He was also able to take a photo of the animal, as seen in a post by Nuevo Community News, Information and Interaction Facebook page that same day.

Victorville Area:Sean Adrian Ishol of Lucerne has animal control on its way, there is a mountain lion in his garage!…

The state’s local Fish and Wildlife Department officials were later able to remove the lion from the home. The animal was in poor health, they said, and was later euthanized. Katrina Hallare/JB