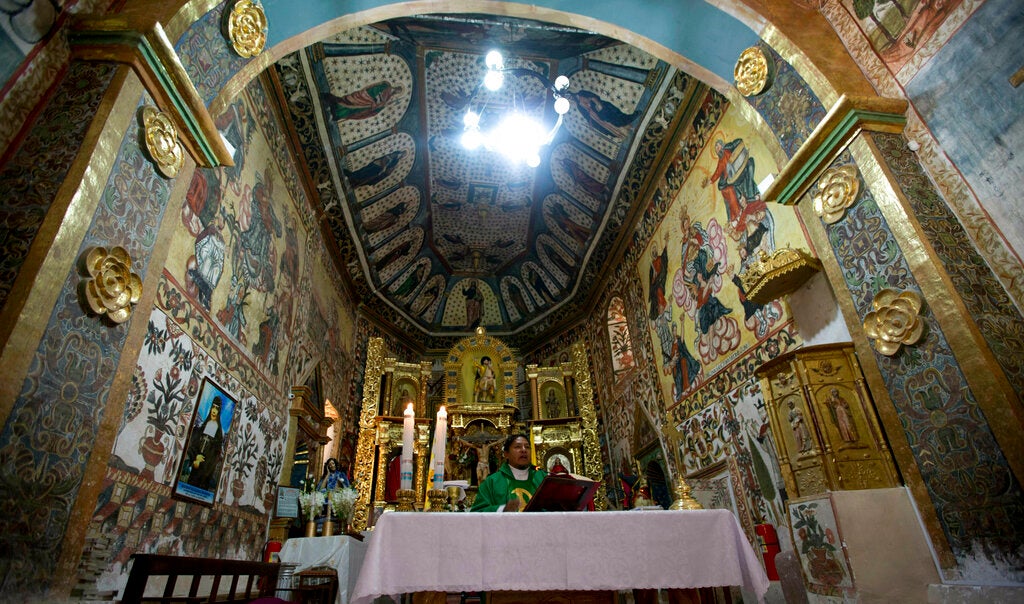 CURAHUARA DE CARANGAS, Bolivia — A buttress supporting an adobe wall has collapsed and grass overgrows the patio of the four-century-old church whose dazzling murals depicting biblical scenes and remote location high atop a Bolivian plateau have earned it the nickname the “Sistine Chapel of the Andes.”

Abandonment and heavy rains are threatening one of the continent’s oldest churches in Curahuara de Carangas, an impoverished Aymara town in Oruro province that saw many of its residents migrate to bigger cities in past decades, a flow that disrupted the traditional, communal system for maintaining the church.

“Each ayllu (indigenous community) had their section of the temple and took care of it. The work was collective based on ayni (pre-Hispanic communal service). That’s how it worked until the 1980s. Migration has changed customs,” said historian Carmen Beatriz Loza, head of the heritage unit at Bolivia’s Ministry of Cultures. “Now the community expects vertical aid from the government.”

Dust covering the temple’s candelabras and furniture and the bird droppings coating its bell reflect this neglect. Heavy rains recently caused one of its buttresses to weaken and fall.

Facing an emergency, officials from the Roman Catholic Church, Bolivia’s culture ministry and the local government are planning to meet to figure out a plan to save the church, built between 1570 and 1608. While no plan has been formalized, two architects arrived last week to look at the damage and the government has a responsibility to maintain the Curahuara church since it is registered as a national monument.

On the outside, the church looks like anything but the Sistine Chapel in Vatican City. Its rough walls of adobe and straw give it the appearance of a humble, rural chapel. But opening its doors and entering, one is overwhelmed by the brilliantly colored paintings that cover its walls, ceilings and cupula. The biblical murals include depictions of the Garden of Eden, the Last Supper and the Final Judgment all done by Aymara painters. The only blank space is part of a roof that collapsed in 1901.

Historians said missionaries wanted to teach the Aymaras about the passion of Christ and heaven and hell. The church’s central dome features a triumphant Christ and his 12 apostles. Another painting shows the Archangel Gabriel crushing a demon with his foot while using a scale to judge the just and sinners, sending them to heaven or hell.

“Everything was done by native painters; there was no European intervention. It is an indigenous reading and narrative about the old and new testaments,” Loza said.

The painters, who did not record their names, combined elements of Andean culture into the biblical paintings made with natural dyes.

The church’s largest mural shows the reign of Christ in heaven with his apostles and saints. But two Andean elements stand out in it: the sun and the moon. In the painting of the Last Supper, Jesus has a roasted guinea pig — a popular Andean food — on his plate. A treacherous cat accompanies Judas and a faithful dog gazes at St. Peter. Lions are drawn with human faces apparently because the Aymara painters had never seen a lion’s face to base their depictions on.

“Different styles are merged here. The church is Renaissance, the paintings mannerist, the altar carved in gold leaf is baroque. Everything is mestizo baroque art,” said Ronald Teran Nava, a restoration expert with the La Paz architects’ association.

The church’s location on a high desert plateau at an altitude of almost 3,900 meters (12,800 feet) and 170 kilometers (105 miles) southwest of La Paz does not seem to make sense. But at the time of colonization, Curahuara de Carangas was an important indigenous population center and for the colonists it lay on vital route linking the silver and gold mines of Potosi and La Paz to Pacific ports in Chile and Peru bound for Spain.

Today the town has about 4,000 inhabitants. While still depopulated, in recent years it has seen a return of some of its residents with a resurgence of llama farming.

Some residents say they want to restore the church that they consider the glory of their town.

“I was baptized in this church, which is our pride. We are waiting for the communal authorities to summon us to work for the temple,” said Quintin Ramos. /kga