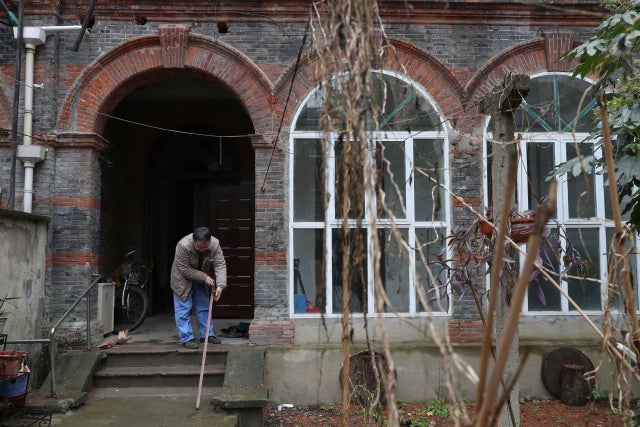 Carpenter preserves old Shanghai, one nail at a time

Carpenter Ma Jiale has spent much of his working life lovingly repairing some of Shanghai’s most attractive — if rather decrepit — historical buildings.

The Chinese city is well known for its skyscrapers, but its pre-Communist days as a cosmopolitan trading hub has left a legacy of assorted architecture ranging from French-style villas to Edwardian mansions and Art Deco buildings.

Authorities say they are committed to preserving the best of the old structures and Ma is doing his part.

The 57-year-old grandfather cycles — old tools hanging from the handlebars — from job to job in a pocket of the northeast district of Hongkou.

“If Shanghai only has skyscrapers, then it is not Shanghai any more,” said Ma, known affectionately in the neighborhood as “Master Ma”.

“I am not saying modernization is not good, but historical buildings should be preserved,” he added.

In a 2002 report, the World Bank described this part of Hongkou as a key historical site not just in Shanghai, but for China.

Past residents included writers, a Communist Party leader from the late 1920s and, according to local legend, one of Mao Zedong’s ex-wives.

Recently Ma worked on a century-old house that from the outside would not look out of place in a wealthy London suburb.

Now divided into several rather ramshackle apartments, Ma said that Japanese used to live there; Hongkou was once known as “Little Tokyo”.

Ma uses tools handed down by his predecessors because he fears that modern or electrical ones will damage the original features of the house.

They include arched floor-to-ceiling front windows, high ceilings and a grandiose tiled fireplace.

There are no original drafts to work off so Ma uses his experience and instinct to make the new door frame fit with its surroundings of faded grandeur.

“The meaning of my job is to protect historical buildings and pass on our craftsmanship,” said Ma.

“What is made by machines is cold and lacks a human touch.”

Ma works for a state-owned property management company and proudly declares that he is a member of the ruling Communist Party.

After the Communist takeover 70 years ago, political campaigns denouncing symbols of China’s past “feudal” era consigned many properties to decay.

The Shanghai government is playing catch-up but in recent years stepped up its efforts to protect and preserve historical buildings, Ma said.

But in a country where people are often afraid of speaking out, Ma is open about what he feels is the inadequate upkeep of some of Shanghai’s attractive old architecture.

There is another lingering worry.

Ma will retire in three years and is eager to pass on his decades of expertise — if only there were budding carpenters out there.

In the neighborhood where he works, there are only four carpenters for a population of more than 10,000 residents, he said.

That inadequate ratio is repeated across Shanghai, he added.

For comparison, the 50-square-meter (550 square feet) apartment he was working on recently sold for five million yuan putting it on a par with central London prices.

Ma said: “If needed, I’m willing to teach young people to do carpenter work. But it’s still too difficult to find young people for this sort of job.”

He added: “I’m very worried that after three to five years, no one will inherit the skills and the protection work cannot continue.” NVG