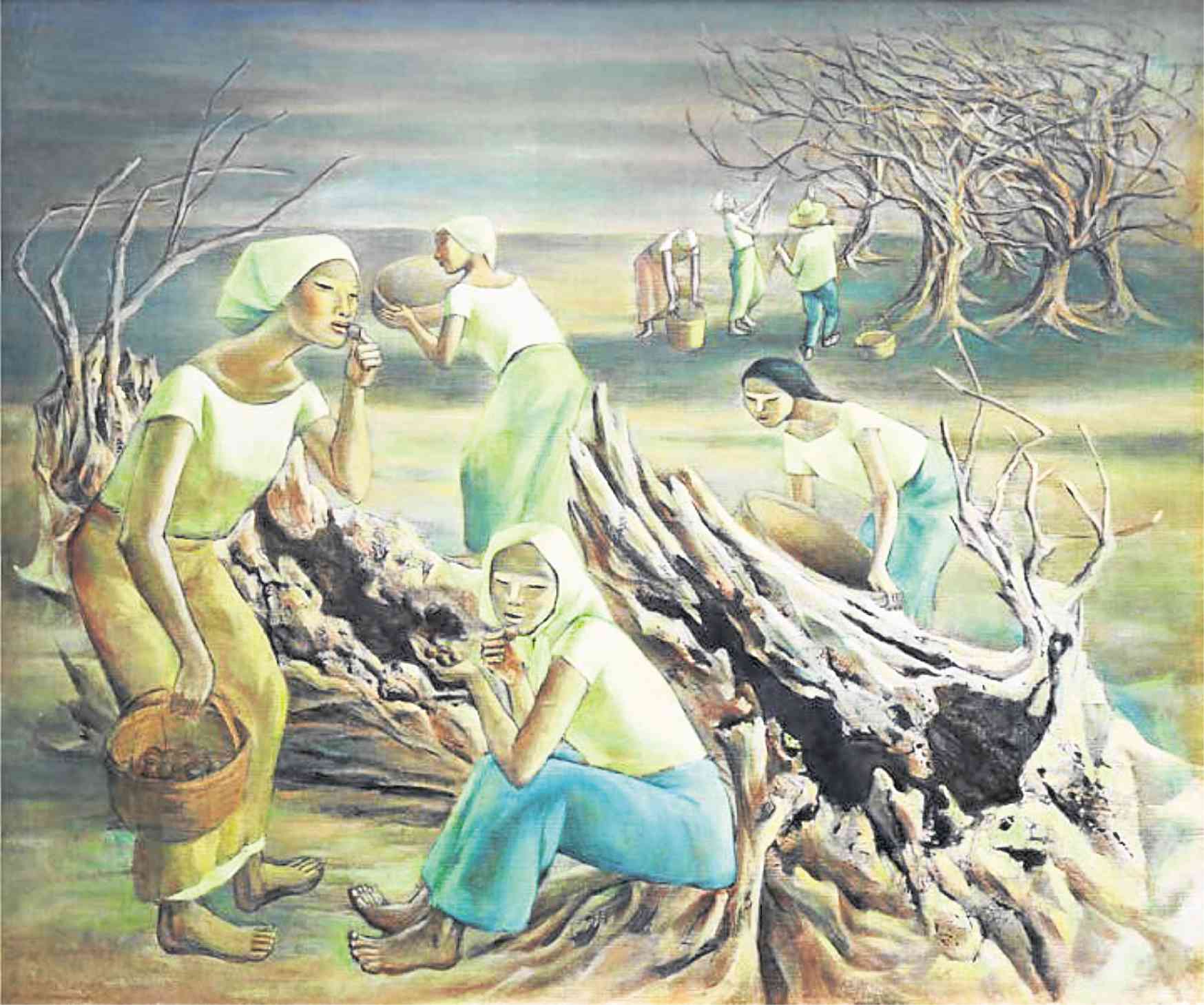 The Amorsolo lots come from his very productive period in the 1930s to the postwar era and show his trademark sunny scenes of rural arcadia.

León Gallery owner Jaime Ponce de León pointed in particular to three works, especially “Cooking Under the Mango Tree” (1946). “The work has been in Spain, owned by Tabacalera, and now finds its way back to the land of its creation,” he said.

Fierce bidding is expected for Magsaysay-Ho’s 1976 oil-on-canvas “Siniguelas Gatherers,” showing her trademark iconography of female farm workers harvesting the native fruit, a depiction in which she achieves, according to the catalogue, “an epic art of the ordinary.”

In “Clytaemnestra” (1970), meanwhile, National Artist Ocampo presents a nude figure of a woman, which can barely be discerned through the biomorphic shapes in his trademark shades. The work displays the artist’s strongest suite: His rich palette of reds that signifies life force itself. Provenance is the José Guevarra Collection.

This year, over 100 auction lots, including a pair of signed Damian Domingo watercolors-on-paper, “Una Undia de Manila” and Un Indio Noble de Manila,” which will be offered for the first time anywhere in the world at an auction.

“These would just be among the very few works that bear (Domingo’s) signature, making it one of the most significant discoveries of the Philippine art world in a long time,” said Ponce de León. “These pieces, from a private American collection, are so delicately composed, that the art of the ‘miniaturismo’ is clearly manifested.”

An extremely rare oil-on-wood by Lorenzo Guerrero, “Vendors” (1868), will also be up for bidding. The painting is an exceptional and exceedingly rare work by the master, showing his unique power to paint a tableaux of the life of Filipinos during the 19th century and seeming even to tell a story in remarkable color and detail.

Benedicto “BenCab” Cabrera’s “Draped Figure III” (2010) delves into the rich Filipino heritage to try and unravel the mystery of our identity by showing the interchange between historical fashion and painting.

Abstract master Romulo Olazo’s “Permutation” series depicts a vast neutral field as an expansive backdrop, from which brittle lines float from the void. “Permutation Series II No. 103” (1994) fills the viewer’s field of vision and blocks out the distraction of the everyday world, evoking the magic of space and silence.

“Diaphanous-B” (1987) is part of another series in which Olazo creates translucent, gem-like manifestations of chromatic brilliance. This particular piece was part of the “Olazo Large Scale” exhibition at the Cultural Center of the Philippines in 2017.

“From Vicente Manansala,” said Ponce de León, “we have a most popular work that was a commentary of the world he lived in at the time, ‘Ang Pulubi.’” “(The 1979 work) is an extremely moving work.”

Ramon Orlina’s “Aguila” (1998) takes inspiration from a bird that’s about to fly, wings apart. Here, the artist shows that he truly is the masters of the art of glass sculpture, turning a fragile material into a magical masterpiece that captures his free spirit.

In “El Panadero V” (1975), Fernando Zobel demonstrates his austere minimalism. Reductive abstraction is the foundation of Zobel’s aesthetics and his art helped shape modernism in the Philippines.

“For furniture,” said Ponce de León, “Isabelo Tampinco is represented by a rare divan that displays all his iconic motifs. A first in this sale is an absolutely lyrical hat rack in kamagong designed by Maximo Viola, Rizal’s best friend in Europe —the man who saved the ‘Noli Me Tangere’ from oblivion by financing its publication in Berlin. Outstanding is a matrimonial bed by Ah-Tay.”

Fierce bidding is likewise expected for “several exceedingly important and extremely rare documents,” said Ponce de León, such as “the confessions of Andres Bonifacio’s executioner, Major Lazaro Macapagal, and a pair of personal statements from his arch-rival, Emilio Aguinaldo, on his involvement in his death.”

Meanwhile, “the mother lode of writings by ‘The Soul of the Philippine Revolution,’ Emilio Jacinto, tell the story of our noble and idealistic past. “

For Rizal aficionados, the auction will bid out an 1890 Barcelona edition of Thomas Kempis’ “The Imitation of Christ,” signed by Fr. Pablo Pastells and given by the Jesuit provincial to Jose Rizal.

Also to be auctioned off is a rare first edition of the “Noli Me Tangere.”

Floor price for each of the two lots is P1.5 million.