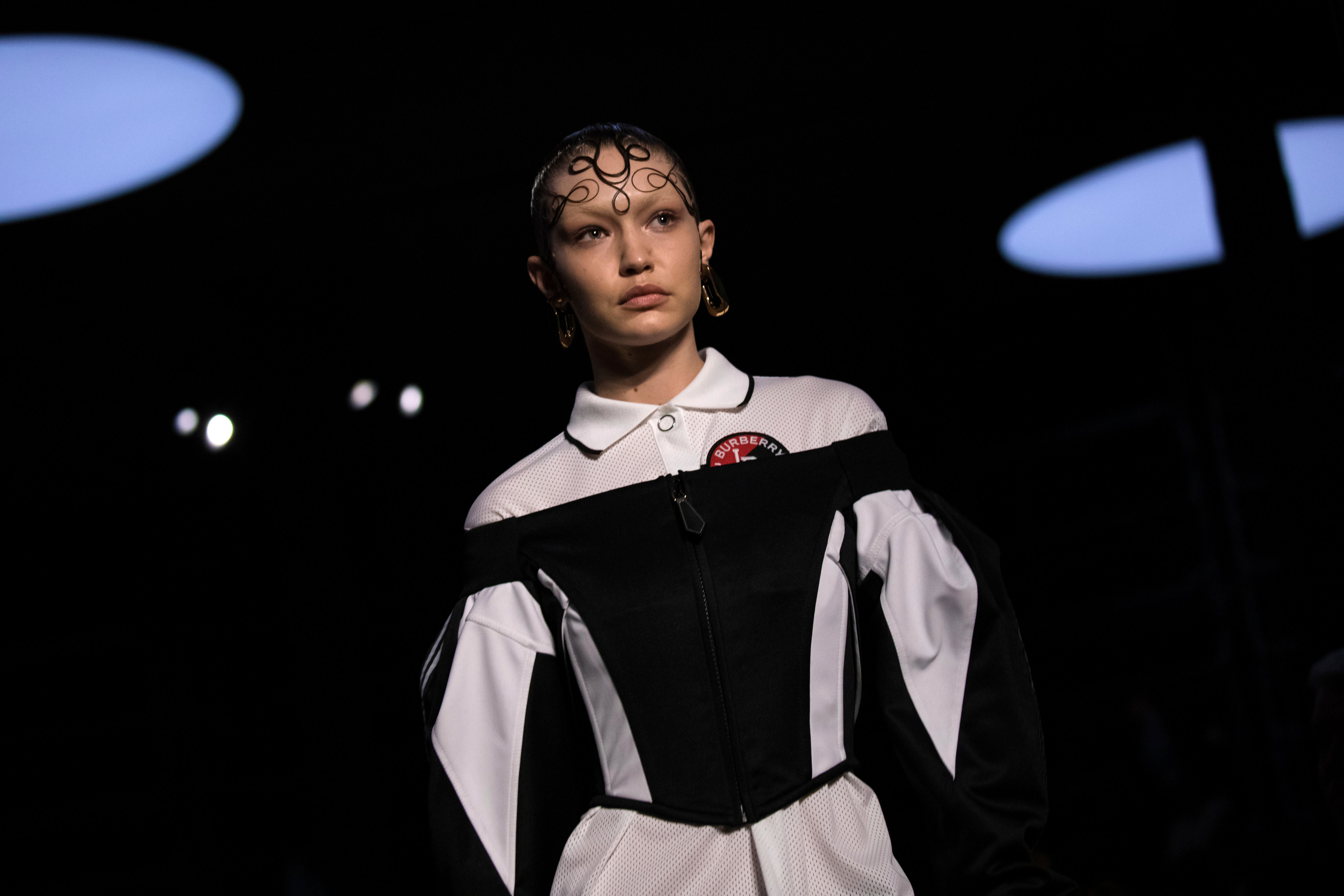 The designer’s husband, retired soccer superstar David Beckham, and the couple’s four children turned up as guests of honor Sunday to support her London Fashion Week show. The former Spice Girl was among the big names showcasing their latest designs in the British capital, alongside Vivienne Westwood, Burberry and Roland Mouret.

Westwood used her show to spotlight climate change and warn of impending doom, Burberry featured a diverse show of streetwear and elegant classics, and Peter Pilotto showed a wide variety of lovely dresses and jumpsuits.

A look at Sunday’s highlights:

Burberry earned its place — again — as one of the top shows in London Fashion Week on Sunday with a widely ranging catwalk show that honored the British brand’s long tradition but showed it is still ready to mix it up and set trends.

The two sides of the Burberry coin were reflected in the two adjacent rooms where the collection was shown: one a sedate auditorium with comfortable, padded seats; the other a raucous wide-open space ringed by a climbing gym of the type young kids would use.

“I have been thinking a lot about England as a country of contrasts, from the structured to the rebellious and free, and I wanted to celebrate how these elements coexist,” Tisci said.

He said he had four characters in mind when putting the collection together: a girl and a boy, and a lady and a gentleman.

There were occasional references to the brand’s earlier incarnation as a purveyor of fine, traditional menswear as a few models were dressed in classic suits and ties, including one double-breasted throwback.

Tisci made ample and imaginative use of the traditional Burberry trench and check, and paired a number of sexy evening dresses with full-length coats for a look at once provocative and classy.

There were a few eccentric touches, including an outfit set off by a giant scarf that paid homage to “The Rime of the Ancient Mariner” by English poet Samuel Taylor Coleridge.

Tisci seems to be enjoying his time at Burberry, treasuring tradition but refusing to be overwhelmed by it.

The front row at Victoria Beckham’s runway show has a younger average age than the VIP seats at other shows. The designer’s youngest, 7-year-old Harper, sat on her dad’s lap for a cuddle as he chatted amiably with American Vogue editor Anna Wintour.

Like everyone else, Beckham family members in the audience whipped out smartphones to take a picture of Victoria Beckham when she came out for a bow at the end of the display.

The designer said she wanted to channel “modern femininity” and cinematic drama for the collection and had in mind a particular image of the woman wearing her clothes.

“She’s proper but she’s definitely not prim,” Beckham wrote in her show notes.

The bell-bottomed trouser, a style the designer has adopted as her signature, made an appearance. So did the trend for checks, which still appears to be going strong. One ensemble featured a wide-lapelled coat, trousers and a tote bag in the same brown check pattern.

Suited and booted at Roland Mouret

Roland Mouret, the designer once best known for his skin-tight “bandage” dress, has moved on. For the upcoming autumn and winter season, his clothes are all about oversized shapes and mannish suits.

Mouret, whose fans include Meghan, the Duchess of Sussex, said he was interested in proportions and styling pieces without regard to traditional gender divides.

For those looking for a properly oversized piece, Mouret offers up a huge, shaggy faux fur coat that is sure to be the talk of the party wherever it goes.

There’s still much that’s traditionally soft and feminine, though. Asymmetric, handkerchief-hem skirts caress the calves and swish beautifully with movement. Strategically draped bodices slyly reveal a shoulder here and a collarbone there. The shimmering metallic Lurex adds luxury, and the show’s closing look, a pale blush gown worn under a matching faux fur coat, is made of a fabric so light it billows like clouds.

The grand dame of British fashion, Vivienne Westwood, put fashion on the back burner Sunday and turned her catwalk show into a broadside against climate change, corporate greed and other ills.

Westwood has moved in that direction in recent years, but she went into guerrilla theater mode for this latest show. It featured angry models stopping in the middle of the catwalk to denounce the planet’s problems, finding time to complain about artificial intelligence, robots, Brexit and a whole lot more.

The first model set the tone by announcing the world would be dead unless something is done this year. The models warned, to a percussive, threatening sound track, that humanity would soon go deaf and blind and have squished internal organs.

A free speech advocate wore a slogan-covered jacket, saying it was to honor Julian Assange, the founder of WikiLeaks who in 2012 took asylum in Ecuador’s Embassy in London to avoid extradition.

One model with a microphone proclaimed “Hollywood has made us into zombies.” A wittier riposte came from the model who announced, “England is going to die from irony.”

The clothes on offer were distinctly androgynous. Many male models were outfitted in dresses or tops and skirts, though others wore beautifully made suits with distinctive draping and a very English look.

Westwood is a fashion legend dating back to the punk era who seemingly can do no wrong with her legions of fans. She was greeted with adoring applause when she emerged at the end of the show and sang that Britain can once again lead the way.

Designer Peter Pilotto seems to be moving from strength to strength as he solidifies his place as one of London Fashion Week’s leading lights.

He showed a wide array of very soft, feminine dresses, jumpsuits and tailored tops and skirts Sunday, including some asymmetrical, off-the-shoulder dresses made of luscious silk and other fabrics. Pilotto and Chrisotpher De Vos said the collection contained “a nod to the gilded splendor of bygone empires” and there was a timeless quality to the collection.

Pilotto is fond of high-waisted trousers matched with revealing top. There were sparkly jumpsuits galore, an array of the silk print dresses that he’s known for, and a bounty of tailored, shaped floral suits and wraparound dresses that could be seen as a celebration of beauty.

Some of the models set off their outfits with long, sparkly gloves that added a metallic sheen to the ensembles. Others wore blouses with dreamy, billowing sheer sleeves. One of the few misfires was a series of pleated skirts with contrasting tops that didn’t really shine.

Pilotto seems to be hitting his stride, buoyed by the buzz surrounding his wedding dress for Princess Eugenie last year. His collections have become a highlight of fashion week. CC