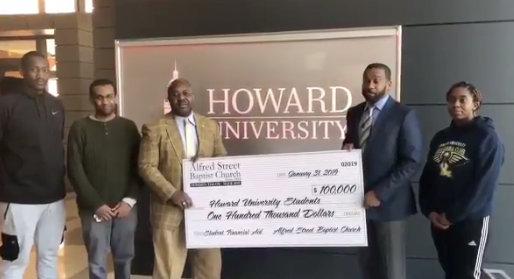 A church in Alexandria, Virginia has paid off the debts of a number of college students. How? After a month-long “fast” had its 8,000-strong congregation limit not just their diets, but also their finances and social media use.

Rev. Dr. Howard-John Wesley led the Alfred Street Baptist Church in a period of prayer and fasting for the month of January, as per Good Morning America on Feb. 15. Many of the church’s members donated during the fast, including Wesley himself, who let go of his daily $4 (about P209) cup of coffee to give to the offering.

In just a month, the church was able to raise $150,000 (P7.8 million). Members initially did not know where their donations would be going, and only recently found out the money went to the debts of students from historically-black colleges and universities.

“I was overwhelmed and excited,” Mya Thompson, a 25-year-old single mom and first-generation college student, was quoted as saying. “I’ve always applied for a scholarship but I’d never received one and it was kind of like, ‘Wow, I finally got chosen.’”

The chosen students were apparently called in to Howard University’s financial office early this February where they were met by Wesley. As per report, $100,000 will be donated to Howard University where 34 students have been chosen, while $50,000 will go to Bennet College, a historically-black women’s college in North Carolina.

“The entire congregation was just moved to tears,” Wesley said in the report. “In this time… we feel it is important as a body of faith that we exemplify what it means to take care of strangers.”