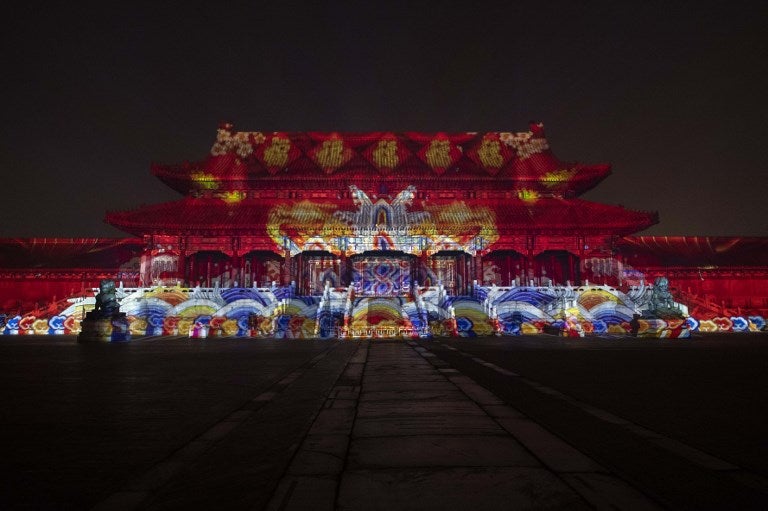 A light show inside the Forbidden City is seen during a cultural event celebrating the Lantern Festival, the end to the Lunar New Year festivities, in Beijing on February 19, 2019. - The event marks the first time the Forbidden City has been lit up at night in 94 years since opening to the public. (Photo by NICOLAS ASFOURI / AFP)

BEIJING, China – Beijing’s famed Forbidden City was illuminated at night Tuesday for the first time since it was opened as a museum to celebrate the end of Chinese New Year.

The sprawling former imperial palace, which marks its 600th birthday next year, was bathed in a colorful array of lights and lasers in front of 3,000 spectators.

Free tickets for the unprecedented light show had been snapped up online within minutes, crashing the Palace Museum’s website as Beijingers and tourists rushed to witness the spectacular display.

Hundreds of red lanterns were hung along the vast ramparts that enclose the ancient seat of Chinese imperial power in the heart of the capital.

The Palace Museum will repeat the temporary show Wednesday night as it celebrates the Lantern Festival.

The Forbidden City – so-called because for centuries it was off-limits for commoners to enter without special permission – was the center of the Ming and Qing dynasties from 1420 to 1912, when a revolution overthrew the last emperor.

It was later reopened as the Palace Museum.

The complex boasts over 9,000 rooms, making the palace the largest and best-preserved example of ancient architecture in China. /cbb