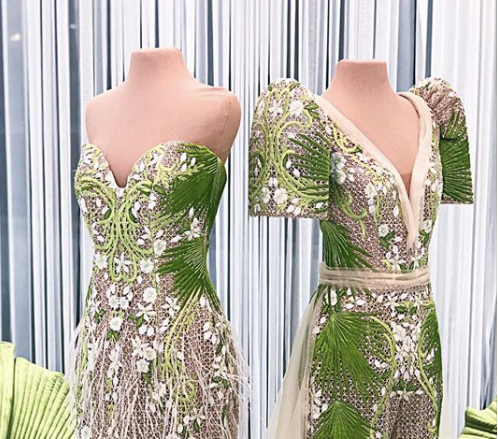 It looks like Mak Tumang has created another masterpiece for Miss Universe 2018 Catriona Gray.

The Pampanga-based designer, who is behind the beauty queen’s “Ibong Adarna” and Mayon Volcano-inspired gowns, once again showcased his talents as he revealed two new outfits for Gray’s homecoming. This he shared on Facebook today, Feb. 21.

The two pieces, a glamorous strapless dress and a Philippine terno, were inspired by the country’s national flower, the sampaguita. “Interestingly, this flower has a lot to do with the concept of ‘Coming Home,'” Tumang said. “You know you are home when its distinct sweet and aromatic fragrance tickles your olfactory sense.”

Aside from bearing sampaguita designs, his creations were also adorned by patterns and the color of anahaw, which is the Philippines’ national leaf.

Tumang also noted that the Philippine terno, which is a “Callado” embroidered gown, bears stylized figures of the panuelo and mariposa sleeves.

SAMPAGUITA: A Promise FulfilledThe Sampaguita; also known as Philippine Jasmine, is the national flower of our…

His post has gone viral, already with around 3,900 likes-reactions and nearly 800 shares, as of writing.

Gray is set to participate in a homecoming parade on the major roads of Pasay, Manila and Makati today, Feb. 21. Another parade will be held on Saturday, Feb. 23 around the Araneta Center in Cubao, Quezon City. JB