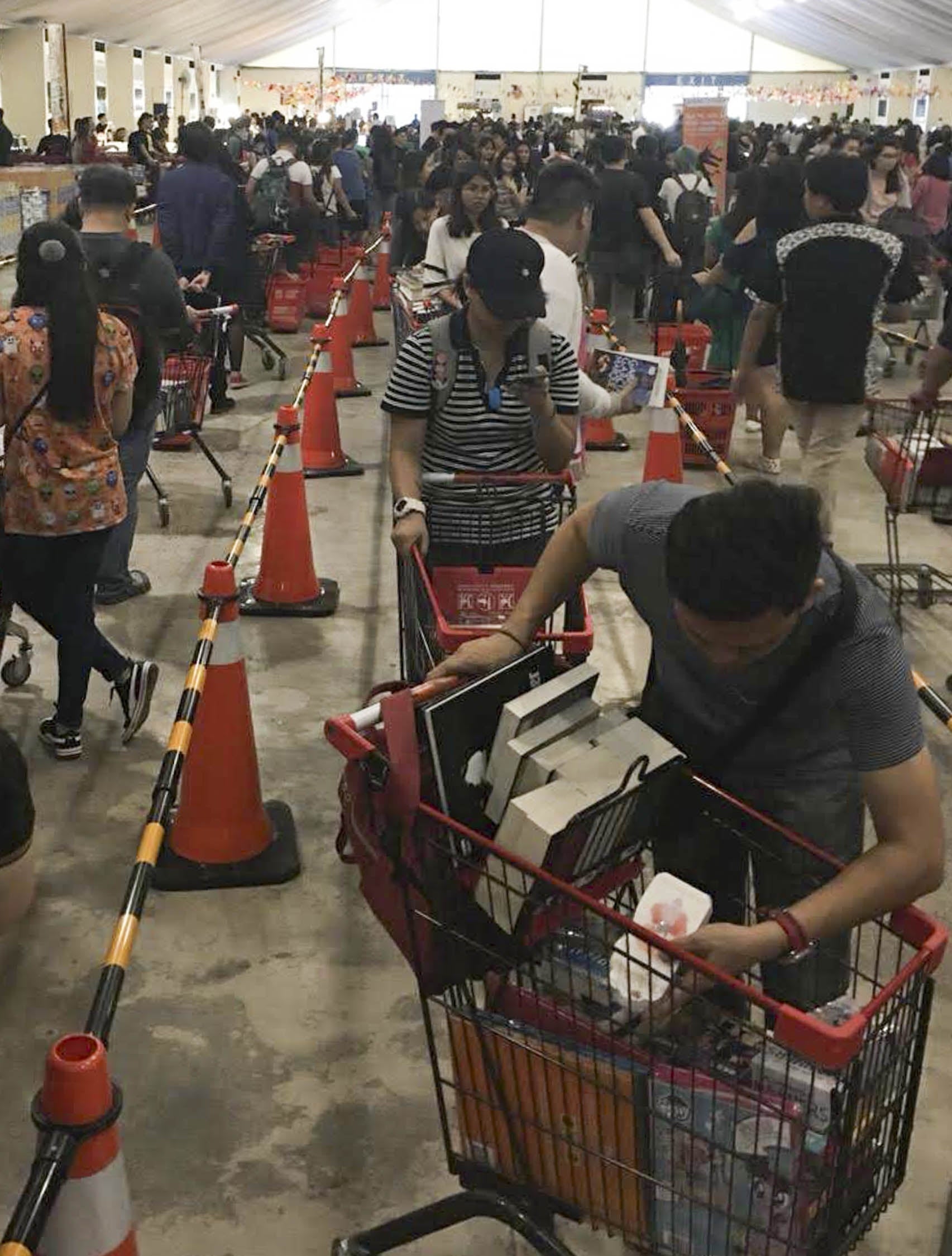 HOT COPIES Too weak to resist the 50 to 90-percent discounts, booklovers add to their treasure trove of bestsellers on Thursday as the Big Bad Wolf fair returns to the World Trade Center in Pasay City. —IRA PEDRASA

It was a scene straight out of a supermarket in desperate times, with shoppers engaged in “panic buying.”

But instead of groceries,  they were snapping up  books.

When the doors to the 2019 Big Bad Wolf Book Sale at World Trade Center in Pasay City opened at 10 a.m. on Thursday, the early birds appeared to be in a hurry as they pushed their carts.

Moments later, a number had their carts full to the brim. Some had two carts; one even had three.

To think the event was just a preview—ahead of the book sale’s formal opening day on Friday—exclusive to media and VIP pass holders who got first dibs on the books, all brand-new copies, offered at ridiculous discounts of 50 to 90 percent.

The rush to grab a particularly interesting title, or one you’ve been wanting to have, stirred mixed feelings of excitement and confusion. Just as you were about to put a book in your cart, you would see something better.

Lyston Pasiliao, a 24-year-old network engineer, was busy texting as he leaned on a cart groaning from his pile. Many of the books, he said, were for friends who had asked him to buy for them.

“It’s really my girlfriend who loves to read and go to book sales,” Pasiliao told the Inquirer, though he had bought a few for himself, too.

There were mothers buying with kids in tow, women friends chatting animatedly, one of whom jumped in jubilation over the experience of holding a book she unexpectedly found.

A steal is what a handful of the 2 million books, consisting of 20,000 titles and laid out on 157 tables, dangled.

Last year, almost 1.5 million books were sold in the Manila edition, about 700,000 in Cebu, and around that same number in Davao.

The books are categorized as “remaindered”—titles that were released six months or one year ago.

In an article by Marlet Salazar that appeared on  Feb. 18, 2018, in Inquirer Business, Yap explained: “Normally, a publisher would print 100,000 books and sell 70-80 percent. The publishers offer to us the remaining 20 percent at discounted rates, giving these books another chance.”

After bringing the bookshop to Indonesia, Sri Lanka and Thailand, the couple decided it was time to include the Philippines.

He emphasized that BBW’s partnership with GK “is very important. We are on the same page.”

He pointed out that if GK’s mission was to help end poverty in the Philippines, “ours is to do our best so that someday no kid will be hungry in this world.

“And we know that we can make a huge difference through books. Because the more people read—especially among the middle class and the grassroots—more people will move up, flip the pyramid and help other people.”

Despite the prevalence of digital media in the last 10 to 15 years, Yap said, “books have made a comeback—stronger and evolved, because we now see on social media the observation that people should have less screen time.

“Everybody needs less screen time, and books are relaxing, you can unwind to it,” he said.

Asked to name his preferred reading fare, he said: “I love nonfiction and self-help books. Malcolm Gladwell is one of my favorite authors … He goes into the psychology of trends and he thinks deeper, a lot of critical thinking. He foresees the next 10, 20 years.”