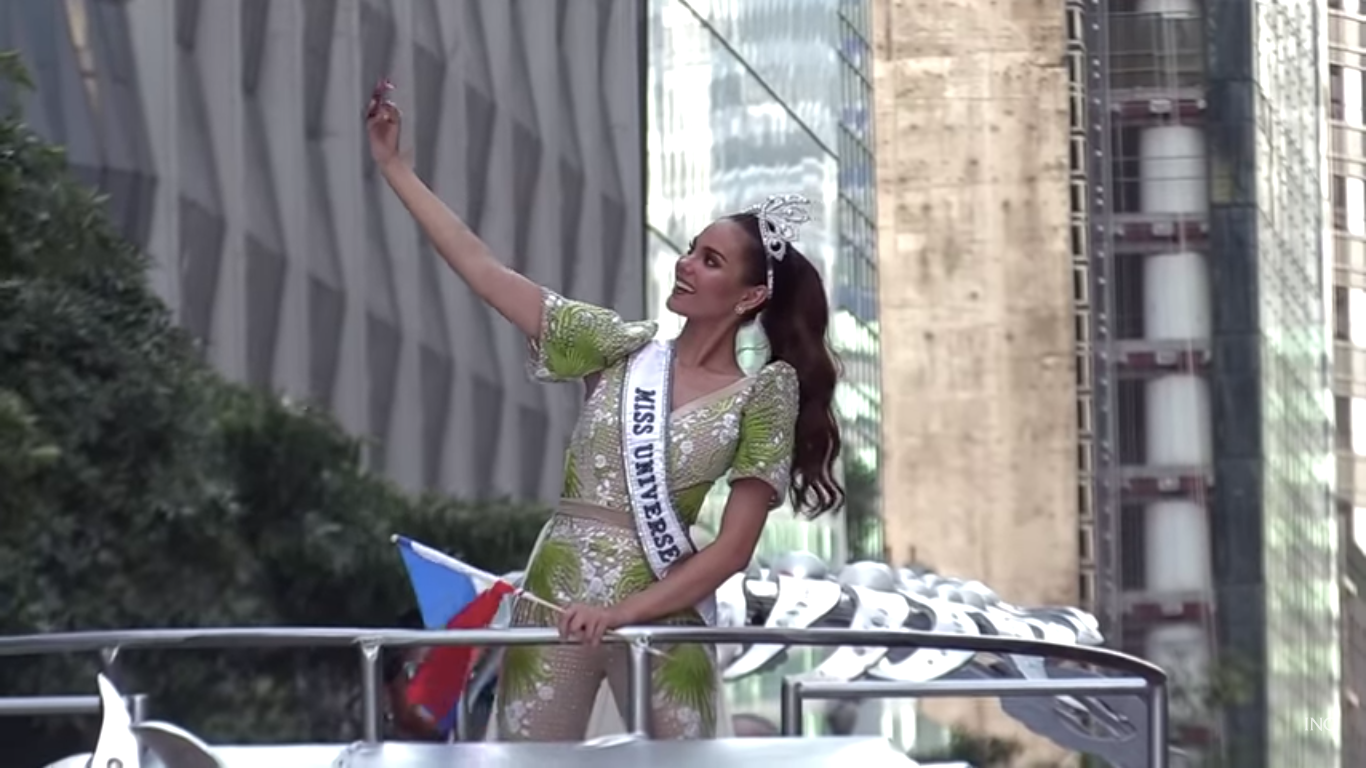 MANILA, Philippines–There was supposed to be a Metro-wide earthquake drill Thursday afternoon, but a tremor of volcanic proportions swept the cities of Pasay, Manila, and Makati where Miss Universe Catriona Gray’s homecoming parade passed.

Aboard a float patterned after her signature “Mayon” competition gown carrying the colors of molten lava, the Bicolana beauty weaved through some of the busiest streets in the capital to celebrate her victory with her countrymen.

Traffic stopped, but the people were not complaining as they saw the vision of a statuesque beauty queen, donning a green and white pantsuit with butterfly sleeves, and adorned with sampaguita and anahaw patterns.

Throngs of adoring fans waited patiently under the intense heat of the mid-afternoon sun, ignoring its sweltering ray just to catch a glimpse of the queen, whose coronation in Bangkok more than two months ago brought pride and joy to a pageant-crazy nation.

Gray bested over 80 other aspirants in Thailand on Dec. 17 to become the fourth Filipino woman to be proclaimed Miss Universe.

The procession pulled out from its starting point in front of the Amazing Philippine Theater at the CCP complex in Pasay City on schedule, at 2 p.m., but crawled its way toward Roxas Boulevard.

READ: Miss Universe 2018 Catriona Gray’s lava-inspired parade float
Fans and supporters, some of whom carrying streamers and posters, screamed Gray’s name, and yelled “We love you!”

The beaming beauty responded with a heartfelt “I love you, too!” and “thank you,” tirelessly waving at everyone who showed up for her parade.

Two hours into the procession, the motorcade still has not yet reached Makati City for the final leg of the parade.

When it reached the intersection of Sen. Gil Puyat and Ayala Avenues, it took a snail’s pace and made multiple stops along the usually busy street.

Not showing any signs of exhaustion, Gray danced to the beat of the marching band’s music, gamely posed for photographs, and waved to the crowd, many of whom just stepped out of their offices.

Some of those who showed up for her parade marveled at Gray’s beauty, exclaiming, “mukhang Barbie!” and “ang ganda-ganda niya!”

The parade finally reached its final stop at the Ayala Center a few minutes past 6 p.m.

Those who missed the three-city parade on Thursday may still get to see Gray in the flesh in another parade on Saturday afternoon at the Araneta Center in Quezon City.

And as in 2015 Miss Universe Pia Wurtzbach’s case three years ago, BPCI is also preparing a thanksgiving show for Gray at the Smart Araneta Coliseum on Feb. 24 dubbed “Raise Your Flag for Catriona Gray.”

The program will be hosted by Boy Abunda, and will feature performances by Bamboo, Jed Madela, KZ Tandingan, Morisette Amon, the TNT Boys, and the ABS-CBN Philharmonic Orchestra will also perform in the program.

Wurtzbach is expected to grace the occasion, along with Kapamilya actors Vice Ganda and Maymay Entrata.

Gray is also scheduled to meet the beneficiaries of charity groups Young Focus, LoveYourself PH, and BPCI’s partner Smile Train. She will also visit the office of Vice President Leni Robredo, a Bicolana like her.

The beauty queen is expected to return to the Philippines to crown her successor in the 2019 Bb. Pilipinas pageant.