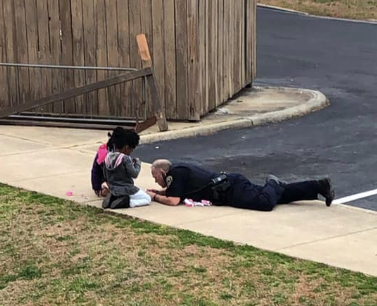 A police officer in Virginia, USA, has earned the praise of a community for an act that, although some may call small, left a lasting impression.

South Hill police corporal C.B. Fleming recently responded to a call from an apartment complex to investigate a gas leak, as per WTVR on Feb. 18. Upon making sure the gas leak was not a threat to the community, Fleming then went out of his way to play with the children outside the building to make them feel safe.

The sweet interaction was captured by one mother, Iesha Roper Boswell, who then shared a video and pictures of the sight on social media.

“A false alarm gas leak turned into a full out play session in Mecklenburg Manor today!” Boswell wrote via Facebook on Feb. 15. “We definitely need more cops like him!!! Thanks for taking the time out to play with the kids!!”

A false alarm gas leak turned into a full out play session in Mecklenburg Manor today! We definitely need more cops like him!!! Thanks for taking the time out to play with the kids!!

In the pictures, Fleming can be see lying on his stomach beside two girls to play dolls. In another, he can be seen crouching down between two young boys who appeared to be playing some kind of board game on the pavement..

“He’s awesome,” Boswell was quoted as saying. “That’s the only word you can really use to describe C.B. It’s just amazing, the bond he has with the children.”

She also said Fleming has changed her daughter’s and niece’s lives. “For him to make my child feel like she’s safe, she doesn’t even have to call 911, she just has to call C.B. if she’s in trouble.”

Fleming is slated to celebrate his 15th year in the force this year, as per the report. He shared that interaction with children is something he always tried to do in his job.

“When I got into this job, I knew there was something different, other than just writing tickets and being the bad person all the time,” Fleming was quoted as saying. “I figured if I could be that bright spot in someone’s day then that’s all that mattered.”  Cody Cepeda /ra