‘Miong’: Looking for the Rep we know and love | Inquirer Lifestyle ❮ ❯ 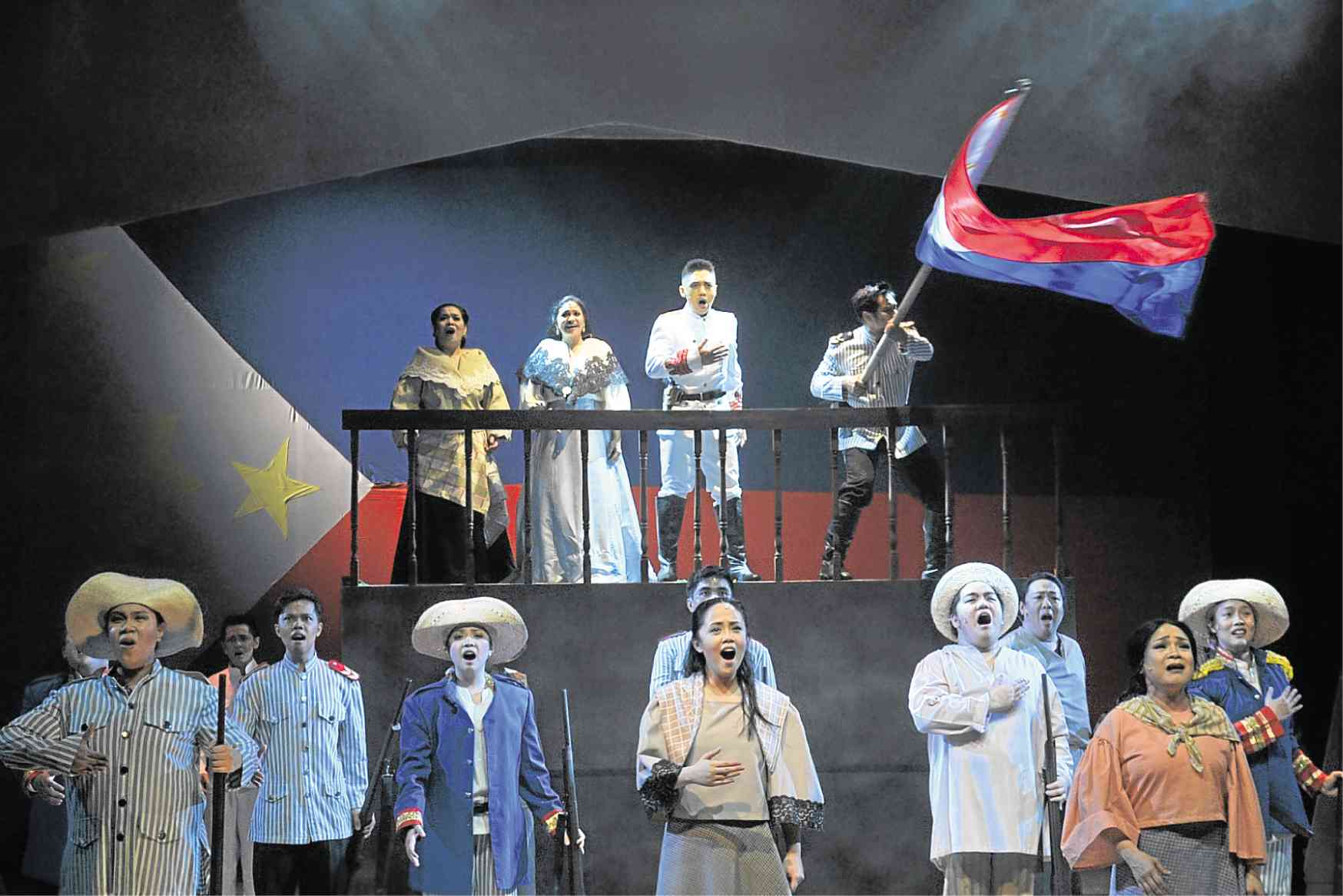 ‘Miong’: Looking for the Rep we know and love

There was a time when the musicals of Repertory Philippines were actually highlights of their seasons—for instance, Menchu Lauchengco-Yulo’s refreshingly scaled-back “Jekyll and Hyde” in 2012; or Jaime del Mundo’s romp of a production that was “The Producers” in 2013; or even 2009’s “Sweeney Todd,” which, while too “safe and bloodless,” as Inquirer’s former theater editor Gibbs Cadiz wrote, was nevertheless “expertly sung, technically polished [and] thrilling in moments.”

“Miong,” the latest song-and-dance specimen Rep has put together, thunderously begs that question.

When this sung-through, English-language retelling of the life of Emilio Aguinaldo—but only until the declaration of independence in Kawit, Cavite—first made a splash in the late ’90s, it was “a three-hour marathon with a cast of 50,” director Joy Virata writes in her program notes.

Now the musical has been pared down to two hours, with a much smaller cast. So why does it feel like a drawn-out relic?

We don’t even have to dissect in detail the musical’s clumsy, borderline-revisionist handling of history—how it reduces Aguinaldo’s complicated hero-traitor persona to something straight out of a childish fairy tale; how it deals with the Aguinaldo-sanctioned execution of Andres Bonifacio in a way that makes the whole grisly affair seem almost like an aside, with the Aguinaldo character even taking to the stage to sing about his eventual remorse and regret.

The happiest of news is that “Miong’s” (understandably) one-sided take on facts is now the least of its problems. This revival makes you wonder why, with the wealth of available material, Rep chose this piece to open its 82nd season.

It could be that age hasn’t been kind to “Miong.” For one, the score (with Virata’s lyrics and Ian Monsod’s music) is a curiously repetitive creature that sounds like the love child of the Boublil-Schönberg “Les Miserables” and a good number of Disney movies.

The story as written is also problematic: It comes off as a protracted Buwan ng Wika presentation, the myriad of scenes—some straight out of the “Les Mis” playbook—hardly bearing dramatic tension.

But then, we also have a set that looks like it wasn’t part of the budget; lights that manically alternate among shades of red, yellow and blue (if this is a play on the Philippine flag, it is not helping advance the story at all); and a sound design that seems to have forgotten the audience and have taken into account only the stage (the show literally sounds like it’s being played from a ramshackle cassette player). Meanwhile, the costumes are so pristine, they may as well have come straight out of the factory.

Worst is that for a two-hour show, the musical feels unending: It’s just a succession of mechanical scenes limply directed and choreographed the same way, so that at some point, it feels like you’ve been watching the same thing again and again. Everything here is either a showstopper or a smaller showstopper.

The pivotal part of “Miong” belongs to Timothy Pavino (Team Lea of “The Voice of the Philippines” Season 2). And credit where it is due: His glorious singing really helps get you through the whole ordeal. On the other hand, his portrayal of Aguinaldo lacks gravitas, or even just some concrete, detailed idea of a character that would set him apart from a man playing dress-up.

That problem extends to the entire musical, actually: For a period-specific show about the first Filipino president, it has a frail grasp of being Filipino (save for that climactic flag-raising sequence). There’s no firm sense of time and place, and more importantly, of personhood and nationhood here.

Maybe “Miong” was a far different animal back in the ’90s. Now, it’s simply an exhausting show that isn’t at all representative of the Rep we know and have all come to love. —CONTRIBUTED

“Miong” runs until March 10 at Onstage Theater, Greenbelt 1, Makati City, with performances on Friday-Saturday at 8 p.m. and Saturday-Sunday at 3:30 p.m. For tickets, call Ticketworld at 8919999 or visit ticketworld.com.ph.