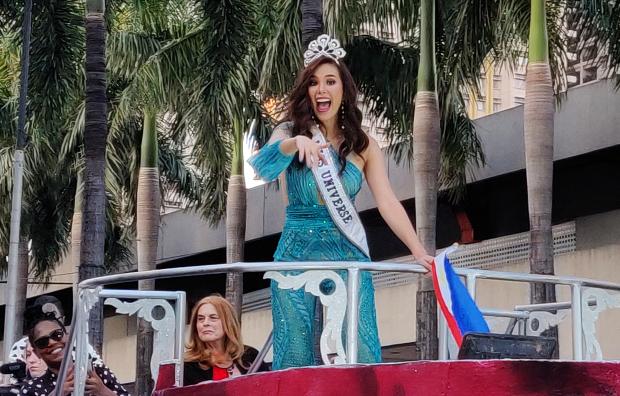 The welcome party for the beauty queen continued with a second parade at the Araneta Center in Quezon City, Saturday afternoon.

It might have been a scaled-down version of the massive three-city procession on Thursday, but “Catrionians” made it as grand and festive, with their expression of adulation manifested through huge photos of Gray, along with posters and streamers.

It was also a trip down memory lane for the Bicolana beauty queen, who had come full circle, because she had a similar motorcade in the commercial district when she was just a Binibining Pilipinas contestant together with the other aspirants exactly a year ago.

Aboard a float which was smaller than the huge truck-sized one she used on Thursday, Gray showed no signs of exhaustion as she flashed her winsome smile and waved at the throngs of adoring fans who lined up the streets of the parade route.

From her first official public appearance at a press conference on Wednesday since arriving last weekend, Gray’s schedule has been packed.

Her parade on Thursday ran for more than four hours, but she still managed to arrive on time for an appearance at the PLDT office in Makati City morning of the following day.

She later appeared on the noontime show “It’s Showtime” on ABS-CBN. Then she made a courtesy visit at the House of Representatives and at the office of Quezon City Mayor Herbert Bautista.

The Binibining Pilipinas Charities Inc. threw a thanksgiving dinner in her honor on Friday evening.

On Saturday morning, she graced the unveiling of her commemorative stamp at the PhilPost office in Manila.

It has been more than two months since Gray bested over 80 other aspirants in Bangkok to become the fourth Filipino woman to be crowned Miss Universe, three years after Pia Wurtzbach broke a 42-year drought for the country, but Filipinos feted her as if her coronation took place only a day before.

From the parade’s starting point at the Novotel Manila Araneta Center, Gray blew kisses, posed for photographs, and responded to her fans’ declaration of love with “I love you too” and “maraming salamat.”

After about an hour of snaking through the commercial district’s restrictive thoroughfares, the parade came to a halt at the foot of Smart Araneta Coliseum, where Gray continued to delight her fans with her arresting beauty.

“Ang ganda-ganda talaga niya!” and “Grabe, and ganda!” were heard from some of those who showed up at the parade.

Those who missed her two earlier parades and those who would still want to catch more of the Filipino beauty queen may attend the special tribute show dubbed “Raise Your Flag for Catriona Gray” at the Smart Araneta Coliseum on Feb. 24.

The program will be hosted by Boy Abunda and will feature performances by Bamboo, Jed Madela, KZ Tandingan, Morisette Amon, the TNT Boys, and the ABS-CBN Philharmonic Orchestra.

Wurtzbach is expected to grace the occasion, along with Kapamilya actors Vice Ganda and Maymay Entrata.

Gray is also scheduled to meet the beneficiaries of charity groups Young Focus, LoveYourself PH, and Smile Train. She will also visit the office of Vice President Leni Robredo, a Bicolana like her.

The beauty queen is expected to return to the Philippines to crown her successor in the 2019 Binibining Pilipinas pageant in June. /atm