The moment Dwayne Johnson stepped onto the platform, it was evident to all that he was a genuine ham and an entertainer at heart, pulling all the stops to make his audience laugh, whether flashing his wide, white smile, making his chest pop and dance or whipping out a ukulele to strum and sing—in Taiwanese, to boot.

Action star Dwayne Johnson and director Brad Peyton flew to Taipei for the premiere of “Journey 2: The Mysterious Island.”  The film, which premieres in Asia ahead of the US, costars Josh Hutcherson (reprising his role from Journey to the Center of the Earth), Vanessa Hudgens, Kristin Davis, Luis Guzman and Michael Caine.

“Journey 2: The Mysterious Island” is the first film to utilize the updated version of the 3D camera developed by James Cameron and Vincent Pace for the film “Avatar,” as well as being the first live action film done with the Cameron-Pace technology.  It’s a lush, vivid film filled with laughs, touching moments and edge-of-your-seat excitement.

Because of this distinction, Peyton wanted to create a truly immersive 3-D action adventure film and stepped out of the sound stage and green screen to shoot the movie’s scenes in an actual jungle in the depths of Hawaii, where the filming process was an adventure in itself, with the actors  being thrown around a simulated helicopter dubbed “The Rotisserie”, resembling National Aeronautics and Space Administration’s “vomit comet”,  and spending hours in a man-made underwater tank filled with 750,000 gallons of water.

Super sat down with Dwayne Johnson and Peyton to talk about shooting in the mud, fending off stalkers and going deep into the rainforest for their own island journey.

Tell us how the “pec pop of love” came about.

Dwayne:  When I was a little boy, I would watch these well-muscled guys have fun with their chests, Arnold Schwarzenegger used to do it years ago, and I told myself “Gosh, one day I wanna just be able to move my pecs like that.”  In relation to the movie, I thought, “How could we have fun with my body in 3-D that’s appropriate, and we came up with the idea of the pec pop and the throwing berries.”

Brad:  I remember when Dwayne pitched it ’cause the first time he ever talked to me, he goes “I got this great 3-D moment,” and of course I think, “OK, it’s gonna be a  punch or something”, and he goes “So the guy gets some berries and then boom!”.  It wasn’t what I expected but it’s perfect because it was so fun and new.

What made you cast Dwayne Johnson?

Dwayne:  You mean what was it about my talent and good looks?

Brad:  What’s amazing about Dwayne is how he’s an incredibly positive person, and you pick up on that, everyone on set picks up on it, and I think what was most exciting was this huge talent that could go all the way from comedy and with one little turn, he was this massive action star, so in a lot of ways, it was kind of like being on set with Superman—’cause he can do anything!

What was the most hazardous part of filming for either of you?

Brad:  I’d say the toughest part might have been the weather, just because we were in Hawaii, the weather was very erratic—it would rain for two hours, then it’d be sunny for two, then rain again, but like I said earlier, part of getting into the dirt, shooting in a real rainforest, being in a real jungle, it brought something to the movie that you couldn’t really get on a sound stage, so what was difficult was also a tribute to the movie, it made you feel the environment and we would just work around it—though there were days when there was mud literally up to my knees, we’d have to get special boots to walk in the set because you couldn’t walk, your shoes would come right off your feet.

Dwayne:  And being in Hawaii, particularly that area in Hawaii where “Jurassic Park” was filmed, there’s a texture that really lent itself to the movie, and I would say that one of the most challenging things for us, for me as an actor were all the underwater sequences that we had, which was shot entirely underwater.  It’s not just being underwater for three feet, we were underwater for twenty feet, we’d have the scuba specialist in between scenes and Brad and I were only able to communicate just through hand gestures.  I’d be like “Hold on,” they’d come in, give me some air, then they’d swim out and we’d continue the scene.  That was challenging, but it was fun.  The tank we shot in was twenty-five feet at its deepest, but one of the cool parts of being in the movie business is that we also got to build Captain Nemo’s submarine, and keep in mind that I had just come off a set chasing Vin Diesel around, right into this, it was just so much fun.

Your role in “Journey 2” as a stepfather is a departure from your other action roles.  Was this shift difficult?

Dwayne: I welcome the opportunity to play a different character, it allowed me to explore family and the value of family, and how important that is, it’s the most important thing to me, pretty much to all of us and it allowed us to explore that.  There are cool visual effects that you can prepare for in this film, comedic moments where there are pec pops and singing, but we always wanted to make sure that it was the notion of family and Hank Parsons as the glue of the group that would stand out.

Brad:  What was great is that Dwayne’s so talented that we really got a great performance.  I wanted the full Dwayne Johnson experience, I wanted the fists, the smiles, the jokes, everything, and I think that’s what we accomplished, a nice nuanced performance.

Your plate is very full with future projects, any role or film you’ve yet to tackle? 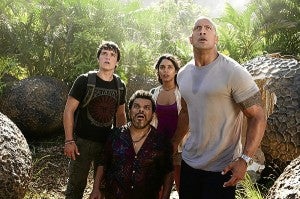 Dwayne:  The goal is just to always continue to grow and to continue to work in a space where you’re doing what you love to do and you know there’s always a lot of projects going around Hollywood, so you just want to pick projects that speak to you and that you know you’re going to love playing, because audiences will know that too, they can tell when an actor is committed and loves what he or she is doing compared to the ones who are just skating along in the movie, I just want to continue to grow and my goal is to get to work in all genres and to go to a movie like this is just great, it’s action adventure for the entire family, and I’d love to do things that are more intense as well.

You spent a long time in Hawaii filming, how did you spend your down time, and did you have any crazy fan moments while filming?

Dwayne:  It’s interesting, I go through cycles—it comes about every eight to ten months where I have a stalker fan that starts to require the local police to get involved, and it’s interesting because they’re generally women who eventually just want some attention.  It’s the pecs (laughs), but in Hawaii, the fans are just wonderful.  I grew up there, and personally it was such a pleasure to bring our movie there, what it did for the locals and the local businesses in Hawaii was just my way of giving back.

Brad:  All of Hawaii was on high alert that Dwayne was there, they were all excited, there were times on the beach when you’d look up and there’d be rows of cameras just to take pictures of these guys.  There wasn’t a lot of down time, but I got to swim with the sharks with Josh (Hutcherson).  I love nature, and part of the excitement of the movie was going to somewhere like Hawaii, there were sea turtles and dolphins, it was pretty interesting.

Despite your encounters with stalkers, you’re still very active on Twitter and Facebook.  How do you manage to keep yourself open despite crazy fans?

Dwayne: It’s a managing process, but I enjoy the platform of social media and how I’ve been able to utilize it over the past year and engaging my fans and in many different ways I get to share my experiences with them, and I think it’s one thing to post pictures and send out tweets, it’s another thing throughout the day when I have a minute to go on my phone and answer questions and just keep that consistent engagement.  I really, really enjoy it.