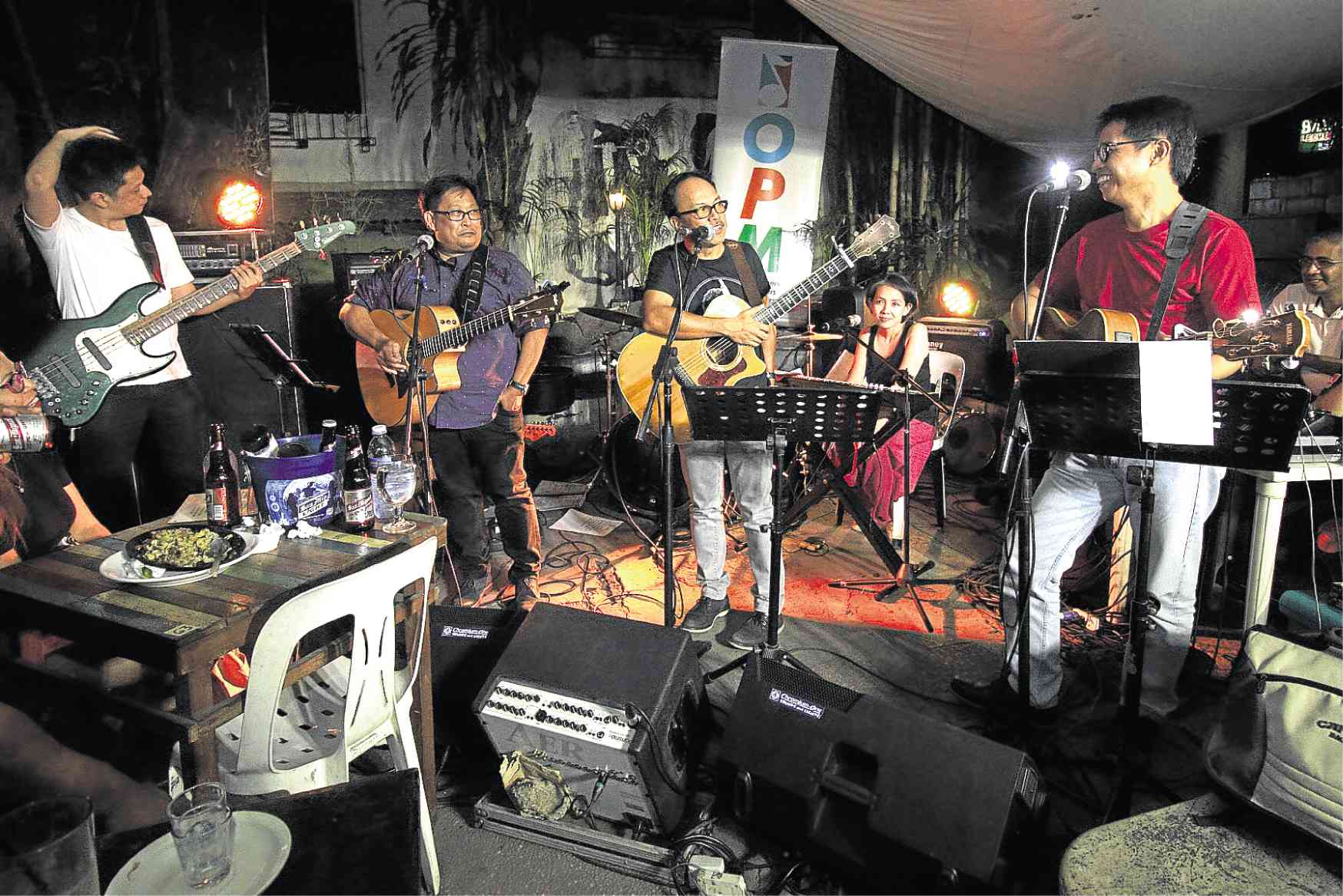 Buklod’s Romeo Dongeto, Noel Cabangon, and Rene Boncocan at the launch of their reunion album in November 2018 —CONTRIBUTED

When Joey “Pepe” Smith passed away almost a month ago, he was honored by fans on social media with lyrics from “Ang Himig Natin,” the iconic song of Smith’s Juan de la Cruz Band.

Folk rock singer Noel Cabangon was one of them, posting a poignant rendition of “Ang Himig Natin” on Facebook. As we listened to Cabangon, we remembered the songs whose lyrics and melody ignited a sense of patriotism in us.

Smith may be gone, but younger singers like Cabangon are reviving this unique genre that is as timely as ever.

We remember it was a pleasant night. An open-air venue at Conspiracy Garden Café (“Conspi”) on Visayas Avenue, Quezon City, became the perfect place to sing, reminisce, and let out our frustration over the state of affairs.

They hooted in response, with some brave souls raising their hands, proud to be baby boomers, martial law babies, Gen-Xers. The handful of millennials watched from the sidelines, partly amused by the titos and titas who gathered for the album launch.

Although almost all at Conspi were a bit older than the last time they bonded with their favorite band, their energy was high. The night was a blast from the past.

It’s been 30 years since Cabangon, Dongeto and Boncocan sang together as Buklod, which they formed in the 1980s at the height of the people’s struggle against the dictatorship.

Much like then, it was today’s call of the times that brought the three together again.

Buklod’s 10-track new album calls out the administration for its draconian, antipoor and anti-Philippines policies.

The genius of Buklod’s songwriting remains. The band has the uncanny ability to transform into catchy and memorable lyrics issues about current events.

Dongeto’s soulful “Tumangis ang Buwan” is an ode to Kian de los Santos and a condemnation of the bloody drug war. Boncocan’s “Malaya” and “Isang Laban, Isang Bayan” emphasize that we need to be united as a people to fight for our nation.

Cabangon, Dongeto and Boncocan discussed their new album with Lifestyle.

How much influence do protest songs have on the people and society as a whole?

Cabangon: Protest songs should be able to inspire a movement and galvanize an action. It should encourage a broader participation.

Boncocan: It’s really hard to calculate. People may like our songs but to believe and join us in our advocacy is a different story.

Didn’t you worry that you would be trolled?

Cabangon: There was a concern. But it’s the call of the times and we need to do something. Our fear over what could happen to our country outweighs the fear for own selves.

Dongeto: Laging may pangamba ng negative reaction from people who have different views on these issues. But we can’t limit ourselves because of fear. Artists should be able to contribute in the defense of democracy and human rights. We owe it to future generations.

Boncocan: If we were fearful, we wouldn’t have done the album. But we prefer that more people hear the message of our songs to open the minds of our fellow citizens.

Is it becoming difficult to love the Philippines and the Filipino?

Cabangon: It’s difficult, but there is need for immense understanding. Our love and dreams for our country prevail. Cultural and the culture of poverty, I think, are among the things that need to be changed in each and every Filipino.

Dongeto: I love this country and all my experiences, beliefs, and what I have achieved revolved around this country. But the divide among the people now is also brought by the political leaders we put in power.

Are there other artists now thinking of using art as form of protest again?

Cabangon: Several artists are involved and are speaking out using their art. We formed a new group, the Art Forces of the Philippines.

Dongeto: There are many artists from different disciplines (such as) music, visual, theater and film who are using their crafts to increase the awareness of people on different issues just like during the time of martial law. Many cultural workers belong to sectoral groups—workers, farmers, students and youth, women, etc. They are quite active. And there are established artists who are also very active in exposing the problems, such as extrajudicial killings, West Philippine Sea, inflation and increasing foreign debt, attacks on press freedom, etc.

Is there a difference between Buklod then and now?

Cabangon: There’s a huge difference compared to when we were young. We have grown and matured. We now have families and children. That’s one of the reasons our convictions, our obligations and responsibilities as musicians are stronger.

Dongeto: I guess we are now more mature and nuanced on how we analyze things. But we remain very spontaneous and nonlinear.

Boncocan: What hasn’t changed in Buklod are our critical views on social issues.

How do you plan to promote this new album? Is your target audience the millennial or those our age who tend to forget easily?

Cabangon: I believe that the revolution begins with the youth. But all of us, young and old, should do our share to achieve our goal. We plan to tour the album in schools and communities.

Dongeto: Both. We need to reach as many as possible. Our songs are for those who believe that freedom, democracy and human rights are the bottom-line. One may be partisan in politics because our political system and politicians are generally incompetent and self-serving, but we should rise and be able to discern that we can’t allow politicians to destroy our democracy, rule of law and the integrity of our institutions. Our songs and message are very clear—the people have the power to change this situation. —CONTRIBUTED