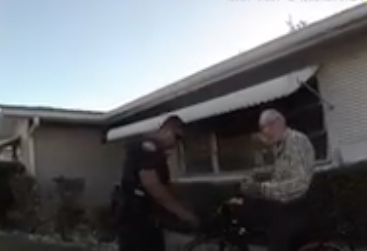 Two police officers from Florida, United States went ahead and bought a man in his 80s a new bicycle after his old one got stolen.

Field training officer Ken Cody and officer trainee Guang Song of the Cape Coral Police Department took a trip to Robert’s home where they surprised him with his new bike.

The heartwarming sight was captured on video by a citizen and posted via Facebook by the official page of the police department last Feb. 19. Robert is 81-years-old, as per reports.

The octogenarian’s bike, which is his only mode of transportation, apparently got stolen outside the grocery store Winn-Dixie.

“The victim was a male in his 80s and the bicycle was his only mode of transportation,” the police department said. “After taking the report, both officers couldn’t just allow the victim to be without any way to get around so they went to Walmart and bought him a new bicycle.”

Field Training Officer Ken Cody and Officer Trainee Guang Song took a report of a stolen bicycle from the Winn Dixie in south Cape Coral. The victim was a male in his 80s and the bicycle was his only mode of transportation. After taking the report, both officers couldn’t just allow the victim to be without any way to get around so they went to Walmart and bought him a new bicycle. They delivered it to his home and made sure the seat was adjusted before leaving. A citizen took the time to share the incident on Facebook. Here is the video of the officers delivering the bicycle. The investigation is ongoing into finding the suspect that took the bicycle.

In the video, Ken and Guang can be seen wheeling the new bicycle toward the old man, who was standing outside his door.

“Is this a new one?” asked Robert.

“Brand spanking new,” quipped officer Ken, who also adjusted the bicycle’s seat to make it sure it was comfortable for Robert.

The new bicycle came decked with a basket and a cup holder. The officers also bought Robert a lock so his bicycle won’t get stolen again in the future.

Meanwhile, Ken promised Robert he will continue to try and find out who stole his old one. The police department also confirmed in their post that investigation is ongoing into finding the suspect that took Robert’s bike.

“I know these things take time… Thanks for everything,” said Robert in gratitude before shaking the officers’ hands.

In the end, he got on his new bicycle and took it for a ride in his lawn. Cody Cepeda/JB