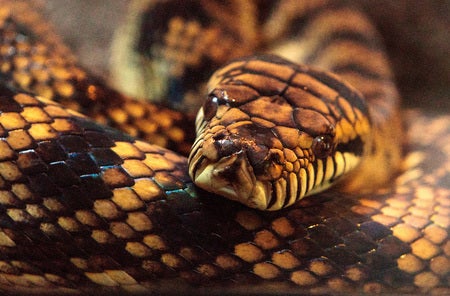 The scrub python, known as Morelia amethistina, is one of the many species of snakes found in Australia and New Guinea. Image: INQUIRER.net stock photo

Snake on a plane: Python flies to Scotland by hiding in woman’s shoe

A sneaky snake slithered its way into a woman’s shoe, which brought it all the way to Scotland from Australia.

The snake, a non-venomous spotted python, was found curled up inside the shoe of Moira Boxall. She had just returned to Glasgow on Feb. 22 after a holiday in Queensland when she made the surprising discovery, as per Australian Broadcasting Corporation on Feb. 25. She stayed with her daughter Sarah and son-in-law Paul Airlie for the duration of her trip.

“She was not at all expecting to find the snake when she was unpacking a bag when she got back to Scotland,” Airlie was quoted as saying.

He added that Sarah helped Boxall to pack her bags, but seemed to not have noticed the snake. “Obviously she just picked the shoe up and stuck it in the bag and then it was there.”

Airlie further stated that Boxall thought she had seen a snake in her room while in Queensland. She woke him up at 3 a.m. to check, but they did not find anything.

“She actually thought that Sarah and I had put a fake snake in her shoe to wind her up,” Airlie said in the report. “So at first she thought it was a joke until she touched it and it moved.”

Upon discovering the snake, Boxall brought her shoe to the garden where she covered it with a box. She then called Airlie in Australia who, in turn, reported the incident to the Scottish Society for the Prevention of Cruelty to Animals (SPCA).

The family were relieved to know the snake was a spotted python instead of a venomous snake.

The spotted python has since been taken by the SPCA and may be housed in a Glasgow zoo. Meanwhile, it seems Boxall will not be taking a trip back to Australia anytime soon. Cody Cepeda/JB