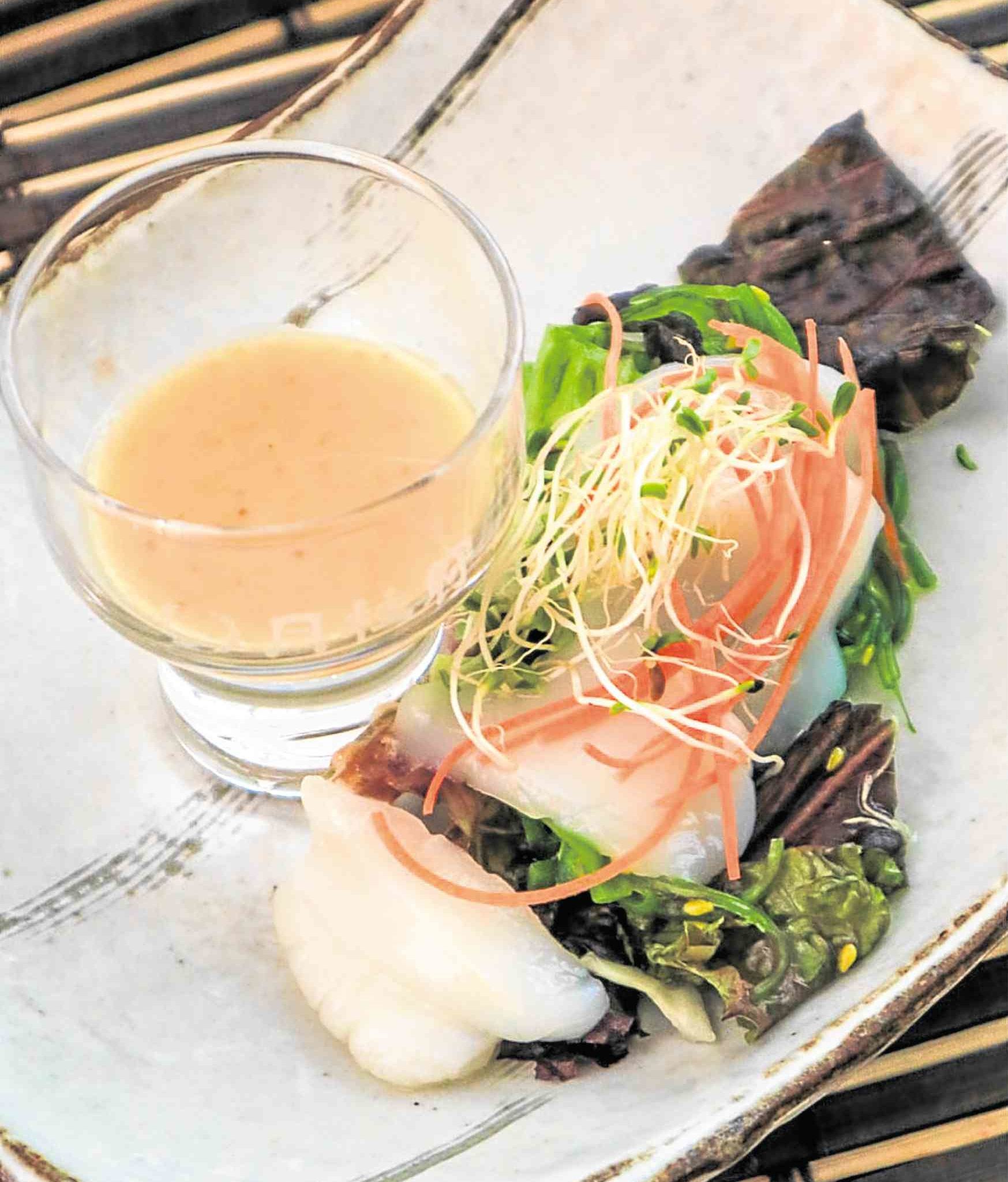 Salad of scallop and seaweed with roasted sesame dressing

How to substitute ‘sake’ for Western wine in food pairing

It seemed like the perfect Holy Week chef’s table. No meat in sight, but certainly lots of seafood. The only “catch” was that each dish was paired with an alcoholic drink. Not exactly Lenten.

We were to taste a sake pairing of Japanese dishes at Senju in Edsa Shangri-La. But the usual vessels of Japan’s rice-based alcoholic drink, the wooden cubes and porcelain cups, were replaced by fluted glasses. It was a hint that we were going to have modern versions of sake, even if the bottles, both big and small, were unmistakably traditional sake containers. The Dewazakura Sake Brewery had six kinds from its product line.

Naoki Kamota, brand export manager, talked about the company’s history and its art of brewing. The brewery was founded in 1892 by the Nakano family in Tendo City, Yamagata prefecture. Kamota used small containers to demonstrate the essential ingredients in making sake—rice, the mold or koji, the yeast or shubo. The rest of the process had to be researched —the moromi or mash, the pressing or joso. Dewazakura has maintained hand processing, which probably speaks of the quality. As in all alcoholic drinks production, terroir or environment plays a big part, since Yamagata’s hot summers and cold winters are considered perfect for rice production.

Dewazakura sake is known for its Ginjo classification, which translates to premium grade. The marketing of this grade started only in the 1980s. And that was what we were able to imbibe later, the light taste and different aromas distinct and pleasant—and chilled, as the best sake today is drank.

Chef Hiromi Yokenawa of Senju had six courses that would play with scallops (hotate) and oysters (kaki), simple and basic so as not to steal the limelight from the chosen sake offerings.

The appetizer of fresh scallops with spicy mayonnaise was served with a sparkling Junmai Saku, hot spicy food and cold bubbly drink, opening up the palate. Here, I thought, was a better version of sparkling wine, citrusy in aroma and taste, and really light.

The salad of scallops with seaweeds and a dressing of roasted sesame dressing could have been made in my kitchen. But pairing it with a Seijo Karakuchi, it needed this hotel setting. It had a light herbal aroma which made this sake a pleasant drink that will go well with most Japanese dishes.

The miso soup was basic even with the addition of an oyster, but which was needed to highlight the sake that would turn out to be my favorite—the Ginjo Oka.

The agemono or fried course had breaded oyster in ponzu butter sauce. The nose of the Junmai Ginjo was acidic, which translated to taste. It was reminiscent of sauvignon blanc, whose aroma has been described as “cat’s piss,” drier than the sake that came before, and probably needed to round off the fried flavor.

The teppanyaki (pan-fried) oyster and scallop had a miso sesame mayonnaise sauce and was served with fried rice. This course required two kinds of sake. The first was Ichiro Junmai Daiginjo, which gave a fruity whiff and taste, but then afterward was like beer, which meant it had a rounded feel.

The last sake was a Yukimanman Daiginjo, a 5-year aged premium product of Dewazakura Brewery. An experienced palate may be able to tell that it is aged because it is like drinking a full-bodied red wine.

Our dessert was a kakigori, shaved ice with matcha syrup and red beans. Because the iced sake made us shiver, having shaved ice was like eating in winter. The house decided to serve warm mochi, heaven-sent.

The wine glasses were now set aside, each one briefly hosting the sake that accompanied what has been billed as Senju’s “Bounty of the Sea” promotion.

The dinner made some of us think how sake can be substituted for Western wines. It gave me hope that our local drinks can be upgraded the same way, working toward quality. Can our rice wine, the tapuy, for instance, be a Ginjo, a premium product?