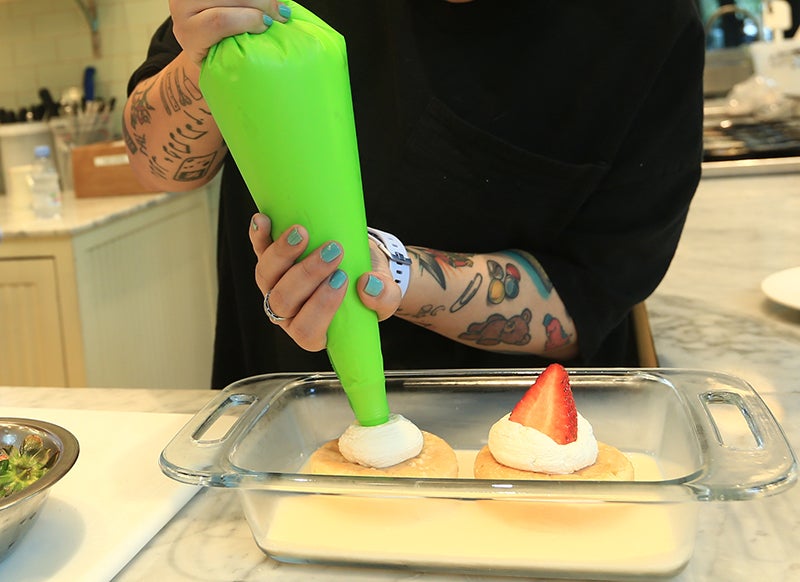 Uncovering the secrets of M Bakery

I can’t count the number of times I’ve gone to M Bakery since it opened last August. I can’t help it. I’m hooked.

But I shouldn’t really be surprised. I had a lot of Magnolia Bakery moments in New York. That vanilla cupcake during my first Sex and the City tour. Another cupcake during my second Sex and the City tour (Shush). Chocolate cupcakes wolfed down after visits to NBC. Cupcakes wolfed down on the subway. My goddaughter Janna’s birthday cupcakes. So many damn cupcakes. Cozying up to tubs of banana pudding. The pecan pie I accidentally left at one of the many Marc Jacobs in the West Village (It still hurts). Being unable to resist the whoopie pies.

And I’ve made even more memories here in Manila.

I go when I feel like eating the banana pudding—there’s a new flavor introduced every month (The original and Lotus Biscoff flavors are my favorites. I need to try peanut butter, their February flavor)! I go so I could bring home banana pudding for my grandpa. I go when the Super team tells me I can’t  arrive at the office without tubs of banana pudding (Clearly, everyone loves banana pudding). I go to get sea salt caramel cookies for my brother (He says they’re the best cookies he’s ever eaten). I go whenever I crave their chocolate cupcakes (More often than I’d like to admit). I go when the Hummingbird is available (Banana, pineapple and pecan cupcake with cream cheese frosting—so, so good). I go when I feel like having a magic bar (it’s what happens when a revel bar and a macaroon decide to have a very delicious coconutty baby).

Basically, I find any and every excuse to go to M Bakery.

But this time was going to be different. This time, I was going to M Bakery to learn their secrets. Chef Candy Lu, who along with Stewart Ong brought Magnolia Bakery  to the Philippines, had flown from Cagayan De Oro to Manila just to show me how they do things in the kitchen.

We were starting with something simple: pouring.

“This is Tres Leches. This has been baked already. The next step is to pour the milk. This has to soak overnight,” said Candy.

I looked at the four little cakes still in their tray in front of me and held the cup of milk in my hand. It sounded easy enough. But being in the kitchen with someone who trained at Le Cordon Bleu Paris made me very nervous so I started pouring very slowly.

Tres Leches is a new menu item that will be available at M Bakery next month.

“Pantay o, not messy,” Candy praised my pouring. Frankly, I was surprised. I spill stuff all the time.

She showed me how to poke holes in the cake using a fork so they can absorb the milk even more. 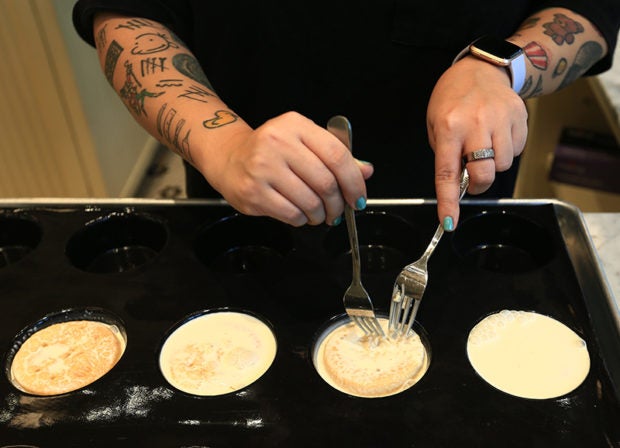 Then her staff brought out cakes that had already been soaked in milk overnight. “We will then pipe cream on top of it and decorate it with strawberries.” 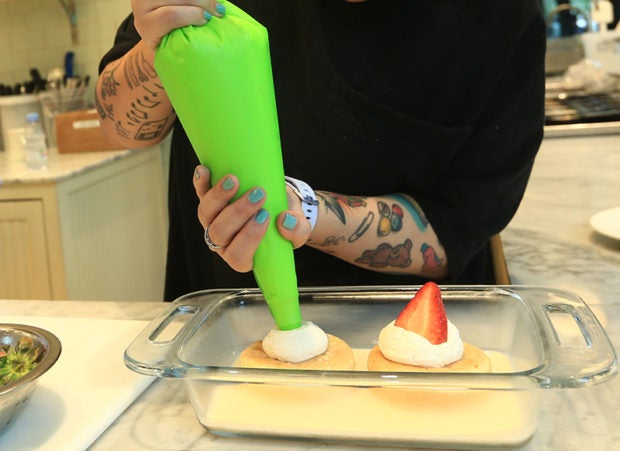 We did that and admired our handiwork. M Bakery’s Tres Leches isn’t just pretty—it’s a light, milky, springy delight. 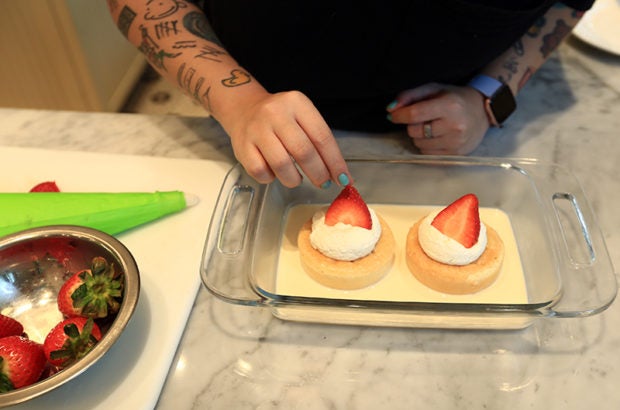 We moved on to one of my forever favorites: banana pudding. M Bakery’s banana pudding is layers of bananas, pudding and wafer cookies that come together to create the perfect symphony in your mouth.

Candy demonstrated how they assemble the chocolate banana pudding (a popular banana pudding flavor). She covered the big tub with a layer of chocolate pudding, lined it with cookies and covered the cookies with banana slices. She paid great attention to the quality of bananas she was adding to the dessert, removing the strings and making sure they were perfectly ripe, with no signs of brown spots. Then she topped the bananas with chocolate chips.

She asked me to do the next layers. 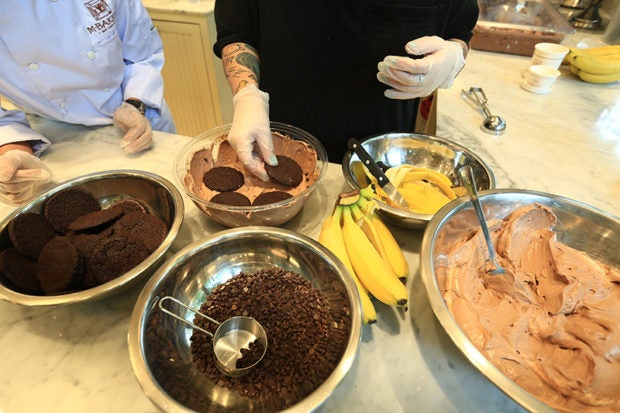 I spread the chocolate pudding carefully, making sure I didn’t disturb the layer beneath it and then added cookies. 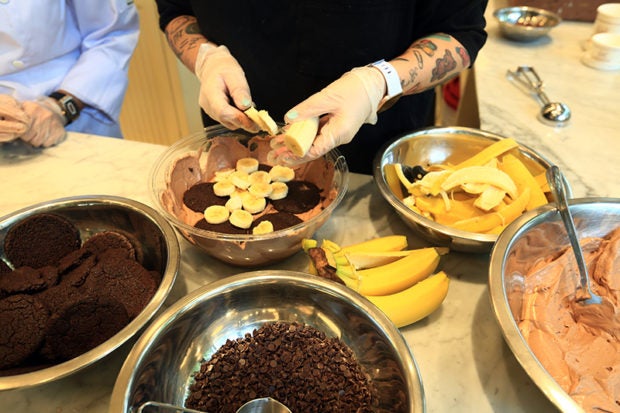 The bananas were the most challenging part. I forgot to remove some of the string during the first few minutes but I soon got the hang of it. Candy started joking that I might have an alternative career in banana pudding assembly. “We’ll call you when we’re short-staffed,” she said. 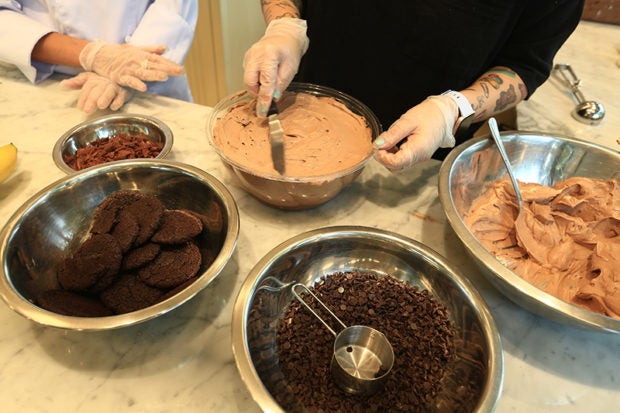 I then learned how to scoop banana pudding from huge trays into the store’s to-go containers. The containers come in small, medium and large (I say with no shame that I can finish a medium on my own) and there are bigger ones available for parties (or days when you just need a lot of banana pudding). 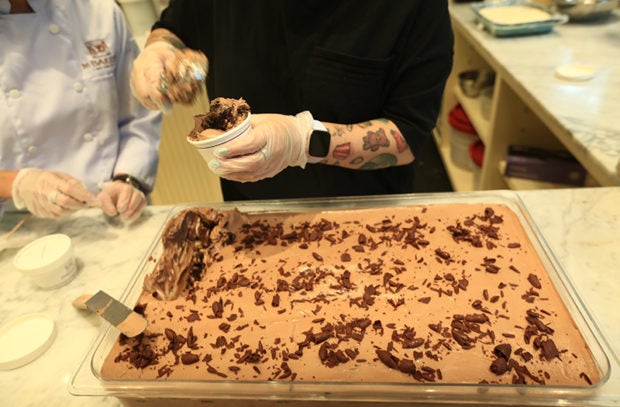 We then spread blueberry topping over the blueberry jamboree (it’s made with fresh blueberries each day) and I learned that they pour condensed milk over the magic bar before baking it—no wonder it’s so rich and so good.

Let me tell you something really interesting about M Bakery’s cupcakes (perhaps more interesting than the fact that that “Sex and the City” catapulted them to fame after Carrie and Miranda ate them in one episode). They have a signature swirl, a swirl so unique to the brand that it was trademarked in 2012. And I was about to try doing it.

Mimi, one of the ladies in the M Bakery kitchen demonstrated the swirl for me. “The secret is in the buttercream,” she said. “It has to be very smooth.”

I watched closely as she scooped pink vanilla frosting onto a spatula and dropped it onto a cupcake in a teardrop-like shape, twisting the cupcake as she went. Using the spatula, she created that perfect swoop, rotating the cupcake in one hand the whole time. She made it look so easy. 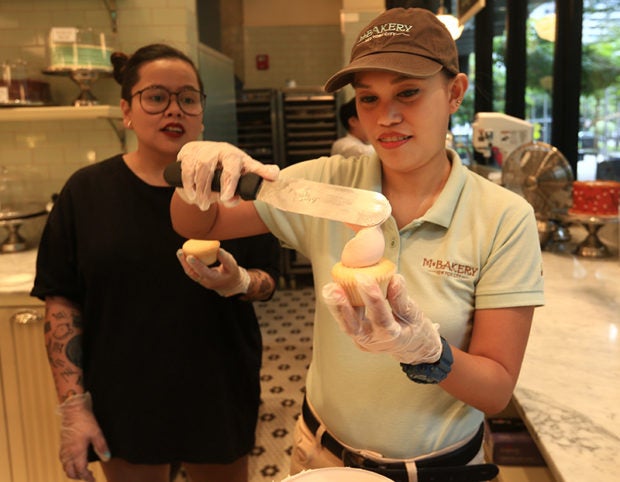 “Practice,” she said, handing me a cupcake so I can learn how to turn it with my fingers.

Then, she handed me the tub of buttercream, letting me mix it with the spatula so I can feel the texture. I smoothened it and prepared to scoop my own tear drop. As they watched, I dropped it onto the cupcake without turning the cupcake so it looked wrong. I had to do it over.

This time, Chef Candy and Mimi held their own cupcakes so I could follow along as they frosted. 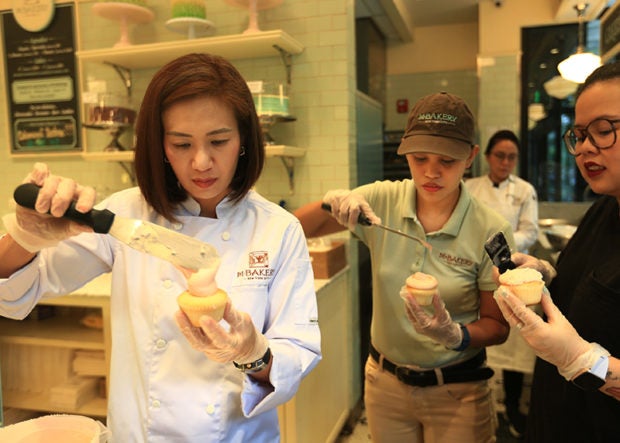 Theirs looked perfect while mine was a disaster. The liner had separated from the cupcake and the frosting looked like it had been created by a 2-year-old. No swirl, no swoop, just pure failure. No customer was going to buy this. 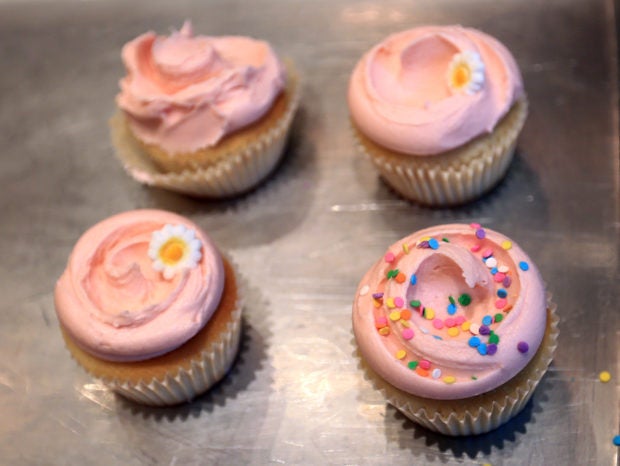 “It takes M Bakery employees at least forty hours to learn how to do the swirl,” said Candy, trying to make me feel better.

I drowned my sadness with a chocolate parfait, an apple hand pie (a new favorite and a new reason to go back to M Bakery) and washed them down with M Bakery’s refreshing blueberry lemonade and comforting Tsokolate Tablea.

I guess I’ll go back to my real expertise: eating, and not frosting, cupcakes. And because now I know the hard work that goes into creating these treats, next time I eat them, they’ll be so much sweeter.