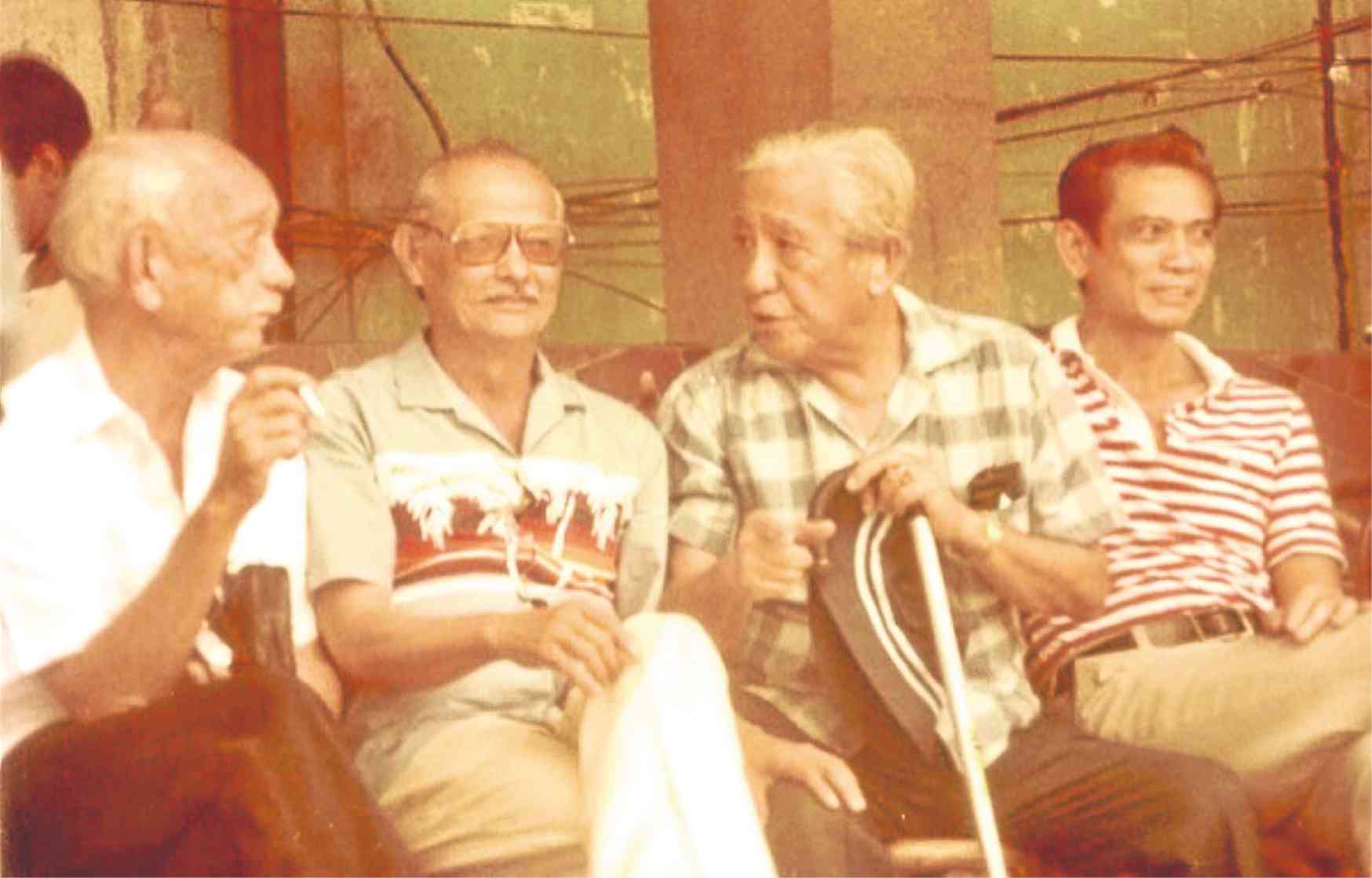 Chino Roces, Titong Roces, Lorenzo Tañada and Teofisto Guingona at the “From Tarlac to the Tarmac” rally in Meycauayan, where military blocked the rallyists.

My angels of Edsa

I believe in angels. I believe some of them to be the spirits of my ancestors, protecting spirits who make such arrangements that we may find ourselves in the right place at the right time.

Easily, I guess, it had to be the arrangement of my ancestors that the rallies are now being held on White Plains Avenue and Edsa, near the Corinthian Gardens village, where an activist Roces cousin lives. That arrangement has made it possible for me to continue to attend the rallies in comfort and safety; my car and driver are just there waiting by the village gate to take me to my cousin’s house for a bathroom break, a bite, some rest, and such other time-outs that a senior requires as emergencies.

Thus, as one of the Edsa veterans who remain convinced there’s no substitute for warm bodies I am yet able to count, to deliver a strong political message: We’ve had enough! My husband feels even stronger about it, and is definitely a stronger warm body to be counted. A journalist by habit if not by regular profession, he goes around and mingles, while I sit behind the stage, conserving my energies for the walk back to the car.

I had also managed to be in the biggest crowd of the current protests, at the Luneta, two years ago, with our more visible and regular earth angel guides and protectors—our good nuns and priests. Our numbers even then were not remotely comparable with those of a generation ago. Not until the protesters in cyberspace come down to earth and the indifferent millennials finally join us veterans—and our caregivers and drivers—in one place and under colorless flag in a unified protest will the critical mass of the two past Edsas be approximated.

Some are just too afraid to come out in the open, and I certainly don’t blame them; but they assure us through their prayers they are with us in spirit. The angels will just have to work on them more.

Doubtless one of those angels, in our case, is my uncle Chino. He never bothered if he went protesting alone; to him, it simply had to be done. I remember stopping to greet Tito Chino on the streets one day. He seemed headed for another rally, alone. I asked who was going with him and he seemed surprised by my question, “Nobody. You want to come with me?”

Another family spirit is my own dad, Titong, a five-term congressman, whose remaining term was interrupted by the abolition of Congress upon the declaration of martial law. He was luckier than Chino, who was arrested on the very first night and clamped in jail. Dad was simply held under house arrest. He found medium of protest as a columnist for Malaya, the mosquito newspaper published by Joe Burgos. When Marcos got caught in the trap set up for him by the American Broadcast Journalist, Ted Koppel, he called for a snap election, and Dad became the spokesman of Laban.

Another guiding angel is Jose W. Diokno, an uncle by his marriage to Dad’s first cousin on his mother’s—the Reyes’— side.

As a young girl, I remember going to the courts to watch him in action, and listen to him in his clear baritone and perfect diction. He was our own Clarence Darrow. He practically gave up his life and career to fight Marcos. He was jailed for two years, with Ninoy, who himself had been in for seven until he became a serious coronary case and Marcos decided to get him off his hands.

‘From Tarlac to the Tarmac’

From his perch in heaven, Tito Pepe Diokno probably never imagined his youngest son, Chel, would, so soon, have to take up his fight for democracy!

To remind me of the angels of Edsa, Dad’s second to the youngest brother, Marquitos, 91, who, with all my other uncles (of whom whose of age were all guerillas), never missed a rally in their days, sent me a picture of one particular rally—“From Tarlac to the Tarmac,” as it was called in commemoration of the assassination of Ninoy—when they were stopped by the military. There were our angels: Dad (I’m older now than he was at the time), Tito Chino, Lorenzo Tañada, and Cory, partly hidden, in black, herself the godsent main heroine of Edsa and president after Marcos. There, too, if unseen, is the spirit of Ninoy himself. I will never forget his bloodied face framed under glass in his coffin in his home, where I had gone and lined up with thousands to personally honor and thank him.

His only son, Noynoy, the preceding president—one too respectable and competent for the current to be compared at all with his successor—brings his parental angels with him and practically glows at rallies.

Tañada’s grandson, Erin, by running for the Senate, is taking up the old battle of his angel lolo and his father, Bobby. In the picture, too, is Teofisto Guingona, who continues to appear at rallies. The last time I saw him was in front of the Supreme Court protesting the ouster of Chief Justice Lourdes Sereno. Not in the picture is Rene Saguisag, who is still up and about voicing his protests when he can, albeit without his Dulce, who doubtless has become his own angel.

These angels are legion, if we include the sons and daughters who had been disappeared and martyred in those dark days of military rule, and the EJK victims of the police, Edith and Joe Burgos’ son Jonas, as well as countless other leaders who sacrificed their lives and lovingly haunt us so that we may never forget.