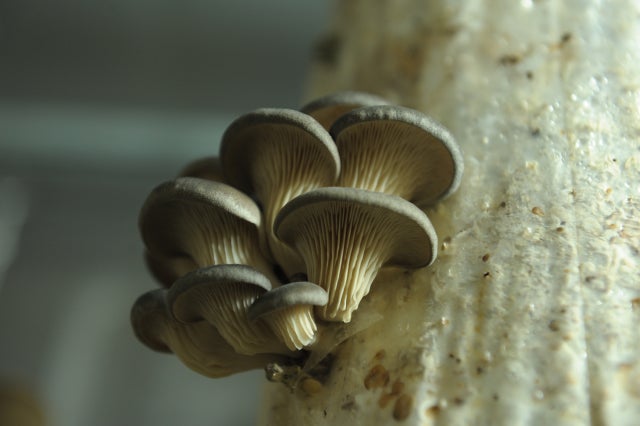 In this file photo taken on February 18, 2014 mushrooms of the company UpCycle are growing in bags filled with coffee grounds, at the Aigrefoin farm in Saint-Remy-les-Chevreuse, near Paris. Image: Eric PIERMONT / AFP

From a container wafts the sweetly pungent odor of coffee grounds which, far from being discarded as waste, are being lucratively recycled to produce oyster mushrooms.

Grounds, which Parisian brasseries throw out daily by the ton, are perfect for the job, and a snapshot of a fast-growing urban agricultural trend.

The mulch of grounds is mixed with cardboard and wood chips and shoved into lengths of plastic with pieces of mushroom culture.

They are then hung vertically in a dark space and left to incubate for a fortnight.

“We are reproducing undergrowth subsoil conditions. The temperature and humidity are comparable,” explains Arnaud Ulrich, co-founder of UpCycle-La boite à champignons (mushroom box), based in the Paris suburb of Saint-Nom-la-Breteche.

Nestled away from the light, the spores of mushroom mycelium fungus — a key food source for many soil invertebrates and which can also help to clean polluted soil — rapidly spread as they would beneath the roots of a tree.

After incubation, the bags containing the grounds and spores, by now completely white, are transferred to a different room for “fructification”.

There, the lights are switched on and humidity reduced. Cuts are made in the bags, allowing the mushrooms to emerge.

“The mushrooms are ‘stressed’ — which makes them want to reproduce and free up their spores, leave the bags,” says Ulrich. “It simply remains to harvest them.”

Ulrich says urban agriculture is first and foremost about recycling organic waste from cities as a means of expanding the move towards a regenerative, ‘circular economy’ making more judicious use of finite resources.

“Thirty percent of urban waste is useful biowaste and today, only five percent of this organic matter is recycled,” he notes.

“We are just doing what they did in the 19th Century, but with modern methods,” he said.

At that time, “Paris mushrooms” were also born from the idea of recycling organic matter.

Market gardeners cultivated their produce in quarries on the perimeter of the capital making use of the droppings of the thousands of horses who helped to deliver vegetables to the market at Les Halles in central Paris.

Today, some 20 tons of coffee grounds are collected each month in and around Paris, the bulk from large firms’ restaurants in the west of the city. From that can be produced around two tonnes of oyster mushrooms.

“It’s a virtuous undertaking — we are producing between 20 and 30 kilos of grounds a week,” says Romain Vidal, 30 and the owner of Le Sully brasserie in Paris and a pioneer of the recycling technique.

“And our chef puts the oyster mushrooms on the menu for the brasserie’s customers,” he adds.

The chef concurs, saying he is “delighted,” describing the mushrooms as thick and juicy.

After every expresso, every cappuccino, Le Sully’s waiters bag the used grounds which a delivery biker from the coffee company whisks away so further use can be made of them.

Paris’s deep-rooted cafe culture means there is no shortage of the stuff — the city annually produces around 600,000 tons of grounds, according to UpCycle, which is helping manage similar projects in several other French towns.

After harvesting, the already recycled grounds embark upon their third lifespan, returning to the ground as compost — or ‘champost’, a play on words with champignon, French for mushroom — mixed in with mushroom strands and wood cellulose.

With their system up and running, Ulrich and co are branching out by installing “Rocket” compost machines in the heart of Paris’ La Defense business center.

The machines swallow up organic waste from restaurants such as peelings and leftover food waste, be it meat or fish, as well as grass cuttings.

The resulting scrunched up waste produces compost in record time… which in turn will be utilized to spawn more Parisian mushrooms from September. NVG

‘For the dog, it’s a game’: Sniffing out truffles in Italy

Make your own truffle pasta