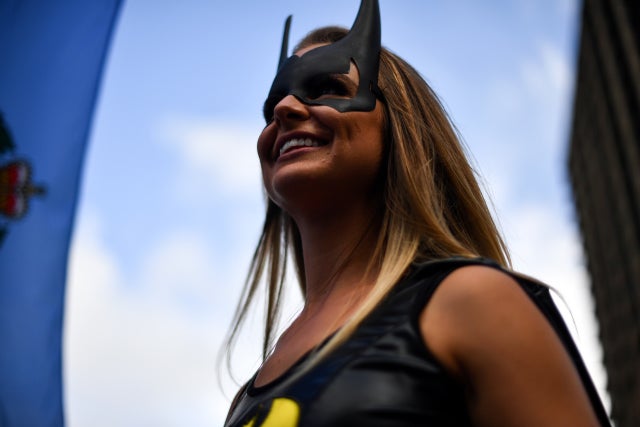 A participant arrives for the annual Gay and Lesbian Mardi Gras parade in Sydney on March 2, 2019. Image: Saeed KHAN / AFP

Drag queens, police, surf lifesavers and “Dykes on Bikes” were among the colorful mix of thousands parading through Sydney Saturday at the annual Gay and Lesbian Mardi Gras.

Organizers estimated some 500,000 party-goers turned out to watch the spectacle, with about 200 floats making their way down Sydney’s Oxford street.

Some 12,500 participants — including armed forces, politicians and celebrities — made their presence known with sparkling costumes, dancing their way through the city’s gay hub.

“People from all around Australia came together on this glittering night to witness a colorful spectacle of protest and celebration,” said Sydney Gay and Lesbian Mardi Gras chief executive Terese Casu.

The theme for this year’s Mardi Gras was “fearless”, with a number of grassroots organizations working across a range of LGBTQI issues highlighted for their dedication to the community.

“The 2019 Mardi Gras Parade was a moment for LGBTQI people, young and old, to come together and move fearlessly into the future,” Casu added.

The roar of dozens of motorbikes carrying women and rainbow flags, or “Dykes on Bikes”, kicked off the parade.

This annual opening tradition was followed by the long stream of flamboyant floats, including a giant dancing yak and a sparkling display of rainbow superheroes, or “super-queeroes”, defending gay rights.

“You can expect… my Naomi Campbell strut down Oxford street,” drag queen Felicia Foxx, from the First Nations float, told AFP ahead of the event.

“It is such an honor to have tonight, and to celebrate and be celebrated, for who we are — our charismatic, unique selves.”

Australia’s pop princess Kylie Minogue made a brief appearance, with a dance troupe led by drag queens donning some of her iconic costumes performing a medley of her songs in tribute.

Sydney’s Gay Mardi Gras grew out of a brutal police crackdown on political protesters in 1978 and is now one of the biggest street parties in the world.

In 2017, after more than a decade of political wrangling, Australia legalized gay marriage.

But many at the parade on Saturday said much more is needed to change attitudes in Australia.

“Love is about hearts not parts, and everyone should be able to love who they want to,” the 28-year-old added. NVG