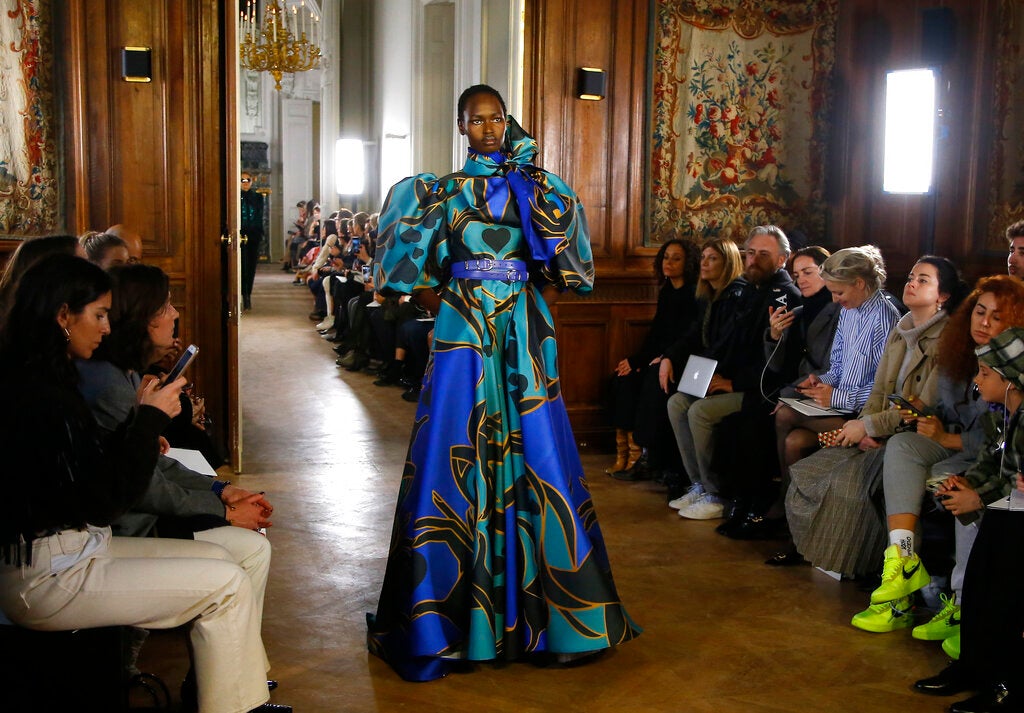 A model wears a creation as part of the Elie Saab ready to wear Fall-Winter 2019-2020 collection, that was presented in Paris, Saturday, March 2, 2019. Image: AP Photo/Michel Euler

PARIS — Hermes dreamt of the stars but failed to light a spark, while Elie Saab let its hair down and channeled the ’70s.

They were among design houses staging collections at Paris Fashion Week Saturday, as organizers were on heightened alert over the prospect of a 16th straight weekend of yellow vests protests.

Some highlights of the fall and winter ready-to-wear shows:

Many guests invited to the Elie Saab show were held up by snaking traffic caused by the yellow vest demonstrations in Paris that began by the nearby Arc de Triomphe.

But the display, held at the exclusive Hotel Salomon de Rothschild, started almost on time and without incident.

Paris’ Fashion Federation has held top-level meetings with police to assess the threat of any potential disruption to shows, especially because luxury Parisian boutiques were smashed in previous marches. No major incident has yet occurred.

Some guests gasped as shouts erupted on the street ahead of the show — but the fracas, it transpired, came from excited fans of VIP attendees who included American socialite Olivia Palermo.

This is the second time Paris Fashion Week has coincided with the protests. Activists argue the French political system is stacked in favor of the elite and big businesses.

An infectious, retro soundtrack had fashion editors smiling as they tapped their feet at Elie Saab’s fun collection that channeled this season’s top trend: The ’70s.

It illuminated a typically-feminine array of color-rich gowns.

Charlie’s Angels-style jabot collars and high necks led the eye down to tight-fitting dresses with floppy ruffles across the bust or down the side.

Thigh-high leather boots — another big Paris trend — were delivered in eye-popping colors such as vivid blue, carmine red and cadmium green. They matched the hues of the gowns in a “total look” effect.

The collection, the house said, was filled with “a little bit of romance and a whole lot of love.” That mantra translated as an overly busy heart print on skirts and gowns that diverged from the retro musing and fared less well.

At Hermes, tiny light bulbs twinkled away from chic wood-paneled walls, creating the effect of a room filled with sparkling stars.

French designer Nadege Vanhee-Cybulski’s display for Hermes on Saturday evening was one framed in poetical language: “The late afternoon light has given away to a constellation in the sky… the air is electric,” read the program notes.

A black sheath with a fine geometric cross opened the show, glimmering with delicate studs.

It was a nice design that introduced a star detail leitmotif that pervaded the 55 looks.

But as the collection progressed — via some slightly ill-fitting black leather jackets, bold distracting stripes at coat hems and high-neck silk chemises with an awkwardly-shaped print at the bust — it became clear this season Hermes’ electricity had failed to light up.

As ever with a brand synonymous with luxury there were some sumptuous pieces: only Hermes can make thigh-high suede boots look this classy, for instance.

But items such as a coat in white coffee with geometric stripes — not quite nipped enough at the waist, and too baggy at the shoulder — revealed a slight issue in proportion.

Silken sea-green blazers, corseted gowns, patchwork jeans with zippers in random locations and pants in dalmatian print: That was just the front row.

On the catwalk, designer Andreas Kronthaler put out a highly accomplished collection of ensembles defined by anachronism and contradiction.

Punk wigs mixed with loose medieval-style gowns, historic gathered skirts, sneakers, red leggings and check pants. Punk was a key touchstone of Westwood, Kronthaler’s wife and design partner, from whom he took over some years ago.

Contrasts in material, color and pattern were key to the typically eclectic style formula.

One look married 80s’ disco queen with a Medici princess, with a pastel silver lame gown descending over a pant-skirt ensemble in dark sienna that curved round and evoked the Renaissance. NVG

A stitch in time: Fashion’s new stars want to save the world