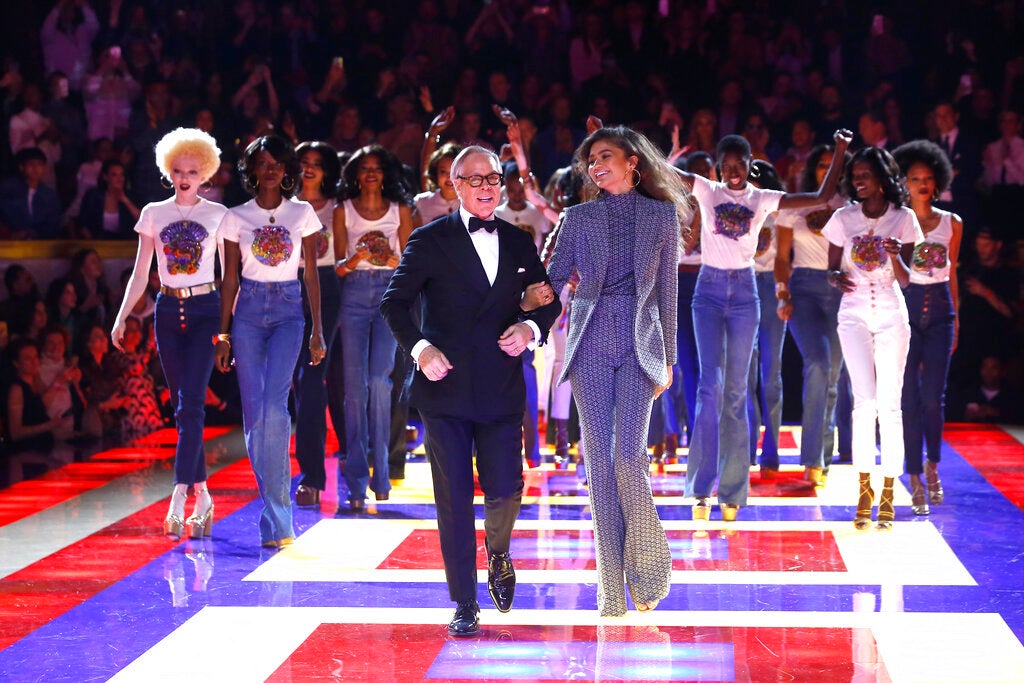 Designer Tommy Hilfiger, left, and actress Zendaya walk the runway with models at the conclusion of the Tommy Now ready to wear Fall-Winter 2019-2020 collection, that was presented in Paris, Saturday, March 2, 2019. (AP Photo/Michel Euler)

The show celebrated diversity and was, in terms of sheer energy, unlike any other so far this season. Dozens of dancers on roller skates boogied amid flashing lights to greatest hits from the 1970s.

The collection itself, sadly, felt more high-street than high-fashion and rather paled in comparison to the ambitious spectacle.

Breton stripes led down to flared denim or leather pants, torso-hugging jumpsuits and a shimmering pleated silken gown with a cape the model waved dramatically.

This fashion show was all about the show.

The show’s finale track, “We Are Family”, had even fashion insiders with perpetually pursed lips singing along.

American actress and singer Zendaya, 22, became the latest in a long line of celebrities to try their hand at fashion design in Paris.

The “Spider-Man: Homecoming” star spoke to The Associated Press about receiving a phone call from Hilfiger to discuss a collaboration.

“I got a call from Tommy Hilfiger himself, which was pretty crazy. I was not expecting that,” she said.

Hilfiger gave her, she said, full control of the designs, which drew inspiration from “iconic women” of the late-1970s and early-1980s.

One of the models who walked in the 1973 Versailles show, Pat Cleveland, modeled for Zendaya. Cleveland often is described as the world’s first black supermodel.

The Valentino designer can do no wrong.

At least, that seemed to be the view of the fashion insiders who whooped and cheered as models stood under a giant neon text about love and loss dressed in colorful 1970s-style silken gowns for the finale Sunday.

The golden dome of the French capital’s Invalides monument twinkled in the background.

A book of verse given to every guest prompted gushing comments about Piccioli’s artistic sensitivity.

The styles, however, weren’t fully deserving of such effusive praise and poetry.

There were, without a doubt, many beautiful styles: especially in the neck detailing that defined the fall-winter aesthetic.

Piccioli took the 70s trend and crowned it with the most diaphanous jabot collars and silk neck scarves seen all season.

Tulle neck fringing fell like a wilting flower, fusing the 20th-century era with a vibe of the Renaissance.

Minimalist touches, such as a loose, black silk gown with the shoulders lobbed off, also hit a high note.

As night fell on the Jardin des Plantes garden gates, dramatic one-meter-high letters were floodlit to spell out “GIVENCHY.”

This season, designer Clare Waight Keller went to the origin myth, the temptation of Adam and Eve.

The eye-popping color palette of peach, lime green, almond, blood red, black and vivid blue painted a picture of a verdant garden, but one that was never far from danger.

Geometry and sculpted shapes defined the silhouettes, such as an extended round shoulder that looked almost ribbed, like an exoskeleton.

Though she went deep into the mythical past for the show titled “The Winter of Eden,” Keller didn’t neglect today’s ’70s trend in the designs that included historic Renaissance sleeves, ruffles and capes.

The shirt, suit and coat were intentionally tiered at the cuff, producing a chic striped effect.

Then, the playful fashion explorations began.

Business pants became preppy shorts that could have come straight out of a private school uniform.

The manly gray suits were transformed into a woman’s bourgeois gray wool coat with thick bands of fur at the hem.

One of the most boundary-blurring ensembles was a three-piece checked suit that opened to reveal a pleated schoolgirl skirt with fine white stripes. A monocle-like accessory hung down over the model’s face. NVG