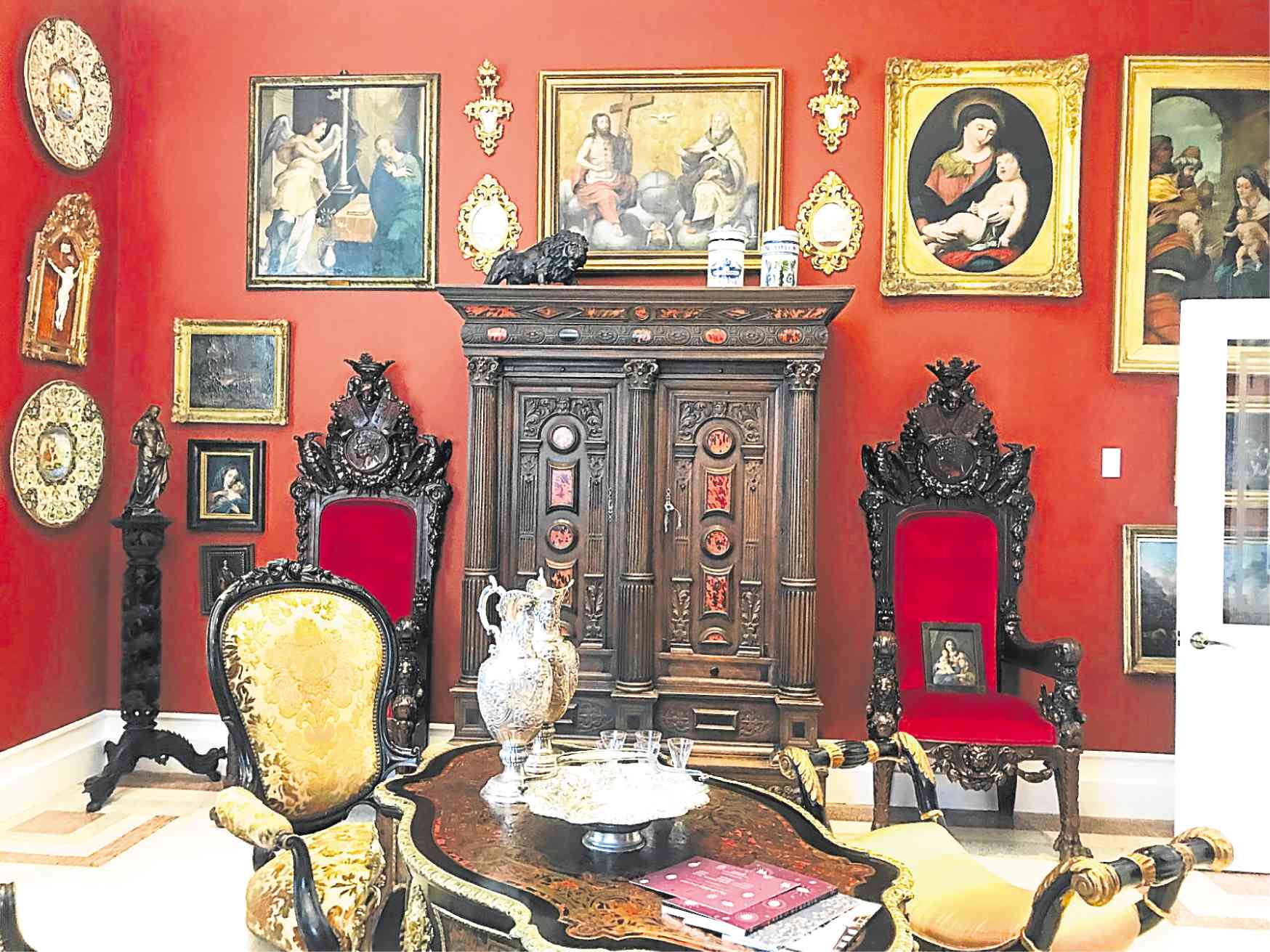 Palacio de Memoria, the seven-story prewar mansion that has been restored by the Lhuillier family, is now the home of the Casa de Memoria auction house.

At the center of a sprawling gated estate on Roxas Boulevard in Parañaque, it aims to bring the “European weekend on the park” experience in the bustling city.

Marketing manager Camille Lhuillier said it took years —and a lot of termite control— to bring the once dark and abandoned property to its present opulence, complete with a grand Murano rosette chandelier and marble posts.

The restorers discovered and kept the original terrazzo floors with images of Philippine flowers, bahay kubo and tinikling dancers.

In the garden, two vintage airplanes will be turned into bars (the smaller one is said to have been the party plane used by Elvis Presley during his Asian tour). A restaurant, a café, events and wedding venues are also in the works.

Lhuillier said she started collecting heritage items with her sister Angelique as a passion project, which evolved into Casa de Memoria. The lots that used to be auctioned off in Makati are on display on the first three floors of the Spanish-revival house, giving buyers context to better appreciate the paintings, furniture, porcelain and ivory pieces in an actual home.

Lhuillier showed us the highlights of the 15th Casa de Memoria auction—The Casa Open—to be held March 9.
(The catalog is available online; viewing by appointment until March 8.)

There are two Hispano-Filipino crucifixes. The Cristo Expirante is an 18th-century Spanish ivory Jesus with curly “pancit canton” hair, on a wooden cross with gilded carved ends.

The other is Cristo Moribundo, a 17th-century polychrome ivory Christ on a brass cross inscribed with names of saints.

“Casa de Memoria has items for seasoned and new collectors,” Lhuillier said. Starting bid is anywhere from P2,000 for a Portuguese metal dish, to P500,000 for a set of Hungarian dinnerware.

The English mahogany bookcase is a heavy, functional piece of gentleman’s furniture from the 19th century. Its base has an adjustable writing desk covered in black leather, with small drawers and compartments.

“Ponte Emilio” is an unsigned 19th-century Italian oil painting of the Roman bridge.

Some of the smaller items in the catalog: a porcelain holy water font; monk bookends made of milky quartz and amber; and a 1945 script of the biographical war film “Los Ultimos de Filipinas” by Antonio Roman.

An earthenware sculpture of a Chinese dancer from the Tang Dynasty is the oldest among the 170 lots. A more contemporary piece is a photogram of a Filipiniana top created without a camera by artist Neal Oshima.

“For me, honestly, the whole KonMari thing is fantastic if you want to live that way, but life is short, live to excess and collect things if you can afford it,” said Lhuillier. “It’s easy to throw a chair away if one finds no value in it, but if these things were never restored, they would never appear again in the world. Those furniture are handmade treasures.”

Palacio de Memoria also serves as a museum of antiquities, and the Lhuilliers have a whole curated luxury escape planned out involving cocktails on bean bags by the pond.

“Filipinos are hungry for a place with a culture vibe. I don’t want to keep on bumping into my 18-year-old nephew in Poblacion, and we’re not too far from Antonio’s in Tagaytay,” Lhuillier said.