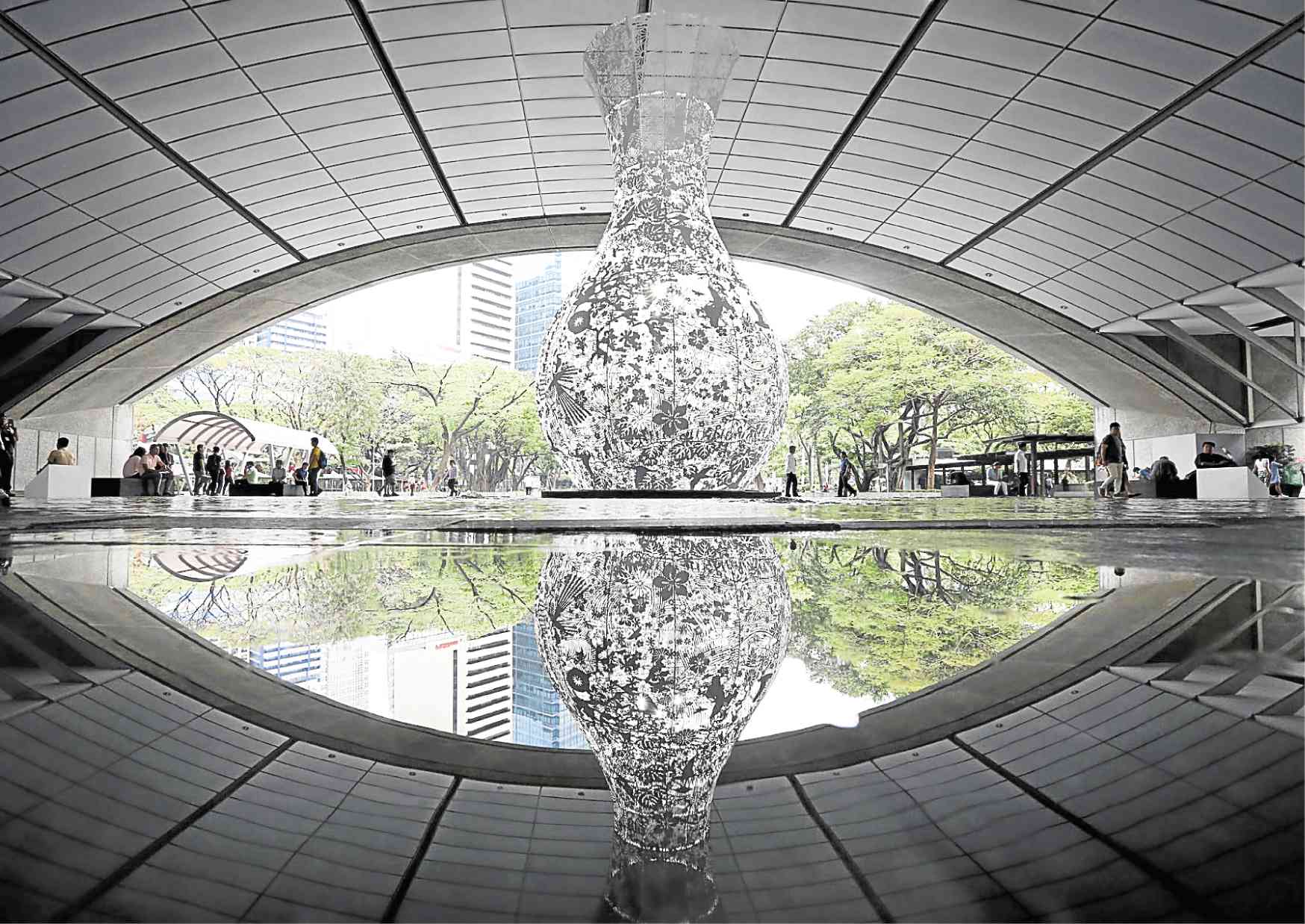 New art to check out at Ayala

Standing high from the fountain area of Tower One and Exchange Plaza in Makati is a luminous, vase-like art installation. The stunning, 23-ft-high structure is a commanding presence at the entrance of the Ayala Triangle Gardens.

Made of iron, stainless steel, urethane paint, and 70,000-lumen LED lights, the artwork, by Shinji Ohmaki, is a symphony of light and shadow, a trademark that the Japanese artist has been known for.

Titled “Gravity and Grace,” the sculpture was shipped all the way from Japan, where it was first exhibited in the Aichi Triennale 2016, one of the largest international art festivals in Japan.

“Gravity and Grace” is a work of passion by Ohmaki, who took inspiration from the 2011 disaster at the Fukushima Daiichi Nuclear Power Plant. It took Ohmaki about five years to finish the art installation.

Its shape and form, Ohmaki told Inquirer Lifestyle, were patterned after Pandora’s box in Greek mythology. He said that the “box” in the original story was actually a large storage jar.

His installation, he explained, is a view of the relationship between humans and nature, a “redefinition of being and reconnection with consciousness.”

To the Japanese, “Gravity and Grace” is an illustration of Zen philosophy—the contrast between light and shadow encapsulated in a vase made of steel, instead of china.

Ohmaki’s fascination with light and silhouette began in childhood. His imagination ran wild each time he caught a glimpse of silhouettes from the shoji, the traditional Japanese sliding door made of translucent paper on a frame of wood.

Through the years, he learned to manipulate not only steel and iron—and cloth— but also light and shadow.

“I like the subtle play of light and shadow, so you see much of that in my works,” he said in Japanese through his translator, Queena Chu, director of Mind Set Art Center in Taiwan, who flew in with him to supervise the installation.

“Gravity and Grace” will be on view until March 13.

Also on exhibit around the Ayala properties are the works of photographer Neal Oshima and Filipino-French artist Olivia D’Aboville. One of their collaborations, a mixed-media installation titled “Plastics in Our Oceans,” shows the urgent crisis in the seas.

Their works can be found in the pond area of Ayala Museum at Greenbelt, and in the new bridgeway connecting The Landmark to The Link carpark.

“We realized that the most dire threat to the ocean is not climate change and global warming, but plastics. It is such an immediate threat,” Oshima said. “I immediately thought of doing something to highlight this problem.”

Oshima and D’Aboville worked with designers, fabricators, architects and engineers to create a beautiful marine installation made of recycled plastics on the grounds of Greenbelt.

“We’re the third biggest contributor of ocean trash in the world. We’re a tiny country and we’re third! It’s not something to be proud of,” D’Aboville said.

This interpretation of the classic painting of the goddess of beauty is a collaboration between Manila-based projection designer GA Fallarme, Dutch light projection artist Henk-Gert Lenten, and freelance 3D motion designer Gedrick Roldan.

“Developing our estates as a center for art, and adding art to their public spaces, is intrinsic in how we have been developing our communities,” she added.

Over the past years, Makati has been a center for art, where the recent 8th Philippine Art Fair at The Link carpark drew 44,000 visitors.

Walkways and underpasses in Makati are being redeveloped to feature new mural designs. The Circuit will soon have a performing arts theater with 1,500 seats, to be completed in 2020.