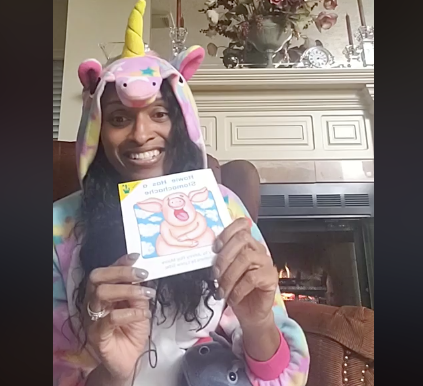 An elementary school principal from Beaumont, Texas has gone the extra mile for her young students by reading books on Facebook, to make sure they have a bedtime story for the night.

Dr. Belinda George, principal of Homer Drive Elementary, has captured the hearts of netizens the world over when videos of her reading to her students on the social networking site surfaced. George took on the initiative so she could foster a connection with her students and encourage them to pick up a book and read, as per The Washington Post on March 1.

The 42-year-old George goes on Facebook every Tuesday night at 7:30 p.m. where she reads the bedtime stories to her students. But due to her growing popularity, even adults have started to tune into her readings.

George took to Facebook today, March 6 (March 5 in the United States) where she once again read a bedtime story to her students.

This time, she donned a unicorn onesie in her reading of “Howie Has a Stomachache” by Johnny Moore, which the author sent to the school himself, as well as “Whispering Winds” by Rachel Hedgecock.

George first began her initiative last December 2018 and has continued to stick with her weekly readings to her students.

At one point, she donned a fun cookie monster onesie in her reading of “Madeline’s Christmas” by Ludwig Bemelmans on Dec. 18.

Ninety-four percent of the students in Homer Drive Elementary come from economically disadvantaged homes, as per NBC’s Today. And since George is not sure if they are being read to, she has gladly taken on the task for herself.

“The idea came from a Facebook group called Principal Principles Leadership Group,” George said in the report. “And from the fact that I absolutely love my children.” Cody Cepeda/JB