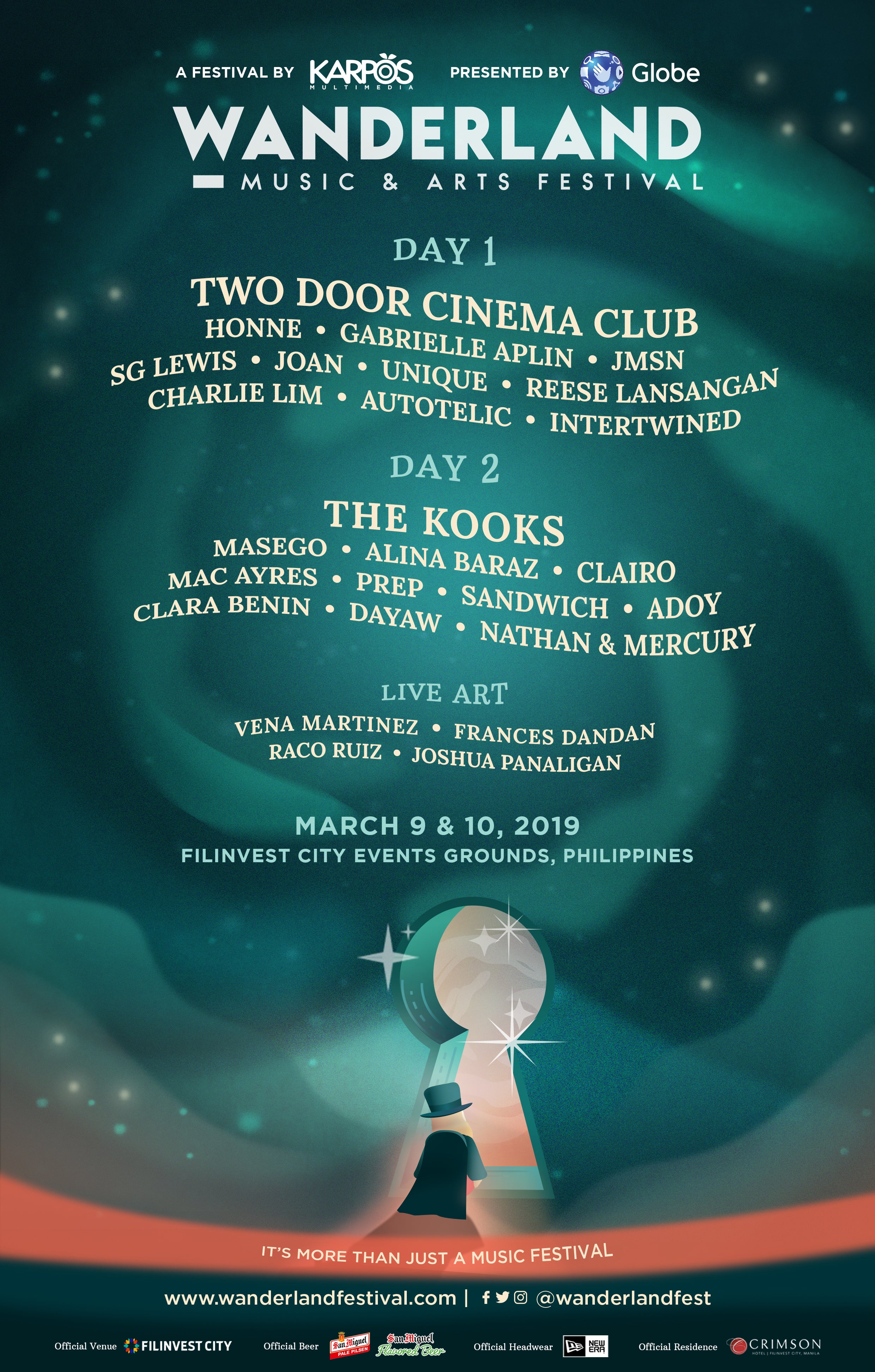 Who’s Who at Wanderland Music and Arts Festival 2019

Get ready to witness the magic of the country’s premier music and arts festival. Globe and Karpos Multimedia bring yet again one of the most-awaited musical extravaganzas that blend local and international flavors—Wanderland Music and Arts Festival 2019!

Now on its seventh year, #GlobeWanderland is now a two-day event with 14 foreign artists and eight homegrown music icons set to perform at the Filinvest City Event Grounds in Alabang, Muntinlupa City, from March 9 to 10, 2019.

Get hyped for this year’s festival with this amazing lineup of artists!

Two Door Cinema Club
No need to wait for “Next Year” as Irish indie rock band Two Door Cinema Club (TDCC) headlines Wanderland 2019! With genres ranging from indie rock and pop to dance punk and post-punk revival, TDCC hits the charts with its songs “Undercover Martyn” and “Are We Ready.” Its tracks “What You Know” and “You’re Not Stubborn” were featured in the hit series Vampire Diaries and Grey’s Anatomy, respectively.

The Kooks
“Listen” and rock out to co-headliners The Kooks as it heats up the stage at Wanderland 2019! Formed in 2004, this English indie rock band has five albums to its credit, with tracks that include “Always Where I Need to Be,” “Naïve,” and “She Moves in Her Own Way.” Interestingly, the group was also featured in a Forbes article as “the most popular band you don’t know.”

Honne
English electronic music duo Honne consists of James Hatcher and Andy Clutterbuck who write, record, and produce their own music. They released their first two EPs in 2014, “Warm on a Cold Night” and “All in the Value.”

Masego
Giving audiences a taste of jazz, house, contemporary R&B and funk fusion is Masego who will serenade the crowd with his hits “Navajo” and “Tadow.” The African-American musician born in Jamaica calls his style “TrapHouseJazz” or Emotion.

JMSN, SG Lewis, and Mac Ayres
#GlobeWanderland will also bring in American musician JMSN (pronounced Jameson) who sang “Talking is Cheap”; British electronic artist SG Lewis who created dance music such as “Warm” and “Better”; and American R&B/Soul artist Mac Ayres who is known for his hits “Easy” and “Stay.”

Alina Baraz, Gabrielle Aplin, and Clairo
This trio is set to bring girl power to the festival this year! American R&B singer Alina Baraz will perform her hits “Fantasy” and “Buzzin.” British indie folk artist Gabrielle Aplin will serenade the crowd with songs like “The Power of Love” and “Home,” while American electro pop artist Clairo will get festivalgoers jumping with “Pretty Girl” and “Diary 001.”

joan and PREP
Completing the Wave 3 announcement of the lineup are joan and PREP. A rising indie pop duo from Arkansas, USA, joan is set to create a name for itself in the pop scene with “Take Me On” and “Love Somebody Like You.” Meanwhile UK R&B quartet PREP will be performing songs from its latest EP Cold Fire, such as “Don’t Bring Me Down” and “Rachel.”

Sandwich
Leading the list of local artists is the multi-awarded alternative rock band that has been in the Filipino music scene since Raimund Marasigan and Diego Castillo joined forces in 1998. Expect iconic songs like “Super Noypi” and “Humanda Ka.”

Reese Lansangan
Known for her cute and quirky music and unique tone, the multi-talented singer will serenade Wanderers with her songs “Home” and “For the Fickle.” Also a songwriter, graphic designer, visual artist and published author, she honed her talents under the tutelage of National Artist Maestro Ryan Cayabyab, Joey Ayala and Noel Cabangon during her time at the Elements National Music Camp, now also under Globe.

Autotelic
This indie alternative rock band was formed in 2012 with members Josh Villena on guitars and vocals, Kai Honasan on keyboards and vocals, Neil Tin on guitars, EJ Edralin on synth, Timothy Vargas on bass guitars, and Gep Macadaeg on drums. In 2017, it won Best Performance by a New Group Recording Artist at the 30th Awit Awards and went on to collaborate with Sugarfree’s Ebe Dancel for the song “Bahagi.”

Dayaw
Playing a fusion of world beat, jazz and rock music, Dayaw is made up of 11 members from different music groups around the world. Sensi Oñate is on vocals while Luis Aganinta and Aying Sayson are on guitars. Royce Barona, Kaloy Aganinta, Ryan Barros and Al Raja Oñate all play percussion. Dale Adeva is on the synthesizers, Iwag Maninantan is on the flute, BJ Malibunas flicks the bass and Gav Sabalburo pounds the drums.

Seek the magic and make it matter with the #WanderlandCommunity! To make Wanderland a magical experience for everyone, be sure to observe proper festival etiquette. Smoke in designated areas only, throw and segregate your trash properly, don’t bring any illegal drugs or pills, and keep track of the performance schedules.