Tagaytay’s famed ‘bulalo,’ in the hands of a French chef | Inquirer Lifestyle 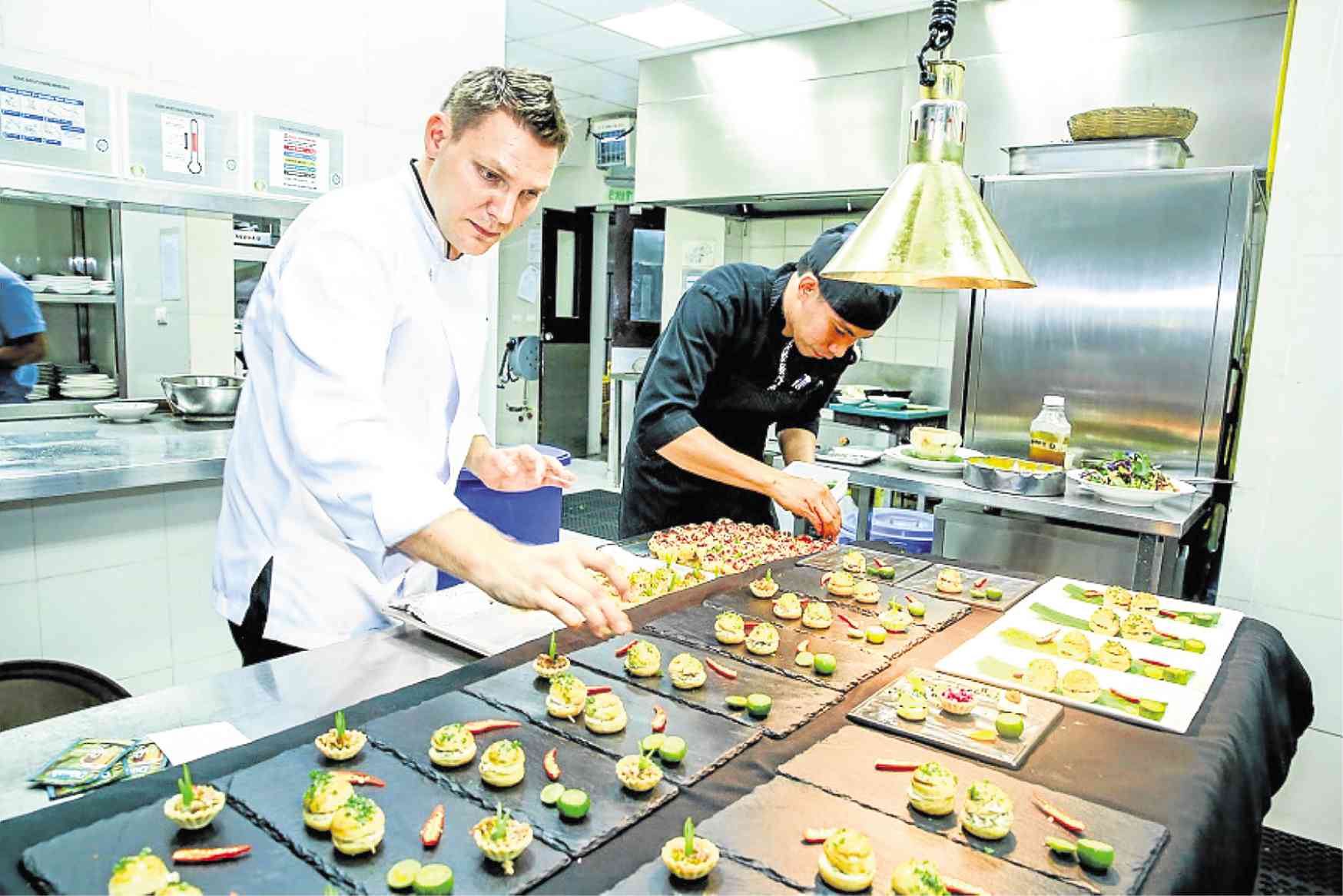 Tagaytay’s famed ‘bulalo,’ in the hands of a French chef

It was the soup that made going to Tagaytay for dinner worth it.

The soup wasn’t the typical bulalo, but a French chef’s take on what is basically sabaw ng baka, but what he knows as beef consommé. He added components—the beef shank encased in a dumpling, and grilled foie gras wiped with corn purée.

But the essence of bulalo was there, especially the taste of corn—fleeting but reassuring.

That was the soup course at the Chef’s Table at Samira of Anya Resort in Tagaytay. Chef Jonathan Bouthiaux featured “The Best of Tagaytay,” paired with the wines of Villa Maria Estate of Marlborough, New Zealand.

For the Filipino touches, Bouthiaux said he consulted with his kitchen staff to get the flavors and textures right.

Beef is prominent in the market stalls in Tagaytay. But Anya’s beef source is in itself an interesting story. It is from the nearby Banderas Farm where Wagyu cows graze on grass contently, said Bouthiaux.

You could see from his look that, sometimes, it’s best not to know your cows before you cook them. But he did them justice with the bulalo and, later, with the grilled rib eye as main course.

At the start of dinner, three kinds of amuse-bouche were served. Chicken adobo was in the choux pastry, a puffy ensaymada with chorizo looked inviting, and then a small tart containing sisig yielded a surprise.

Guests picked which one they wanted to start with, but later we were told the order should have been better if the adobo was first, then the ensaymada, and the sisig last.

It’s not a hard rule, though, to start with sour, then sweet, then salty, but we all liked the different flavors as a start to the adventure, taken with the Villa Maria Estate Lighter Sauvignon Blanc, Private Bin, 2017.

As the wine’s name mentioned, it was really light, perfect as a beginning drink, light peach on the tongue and nose.

The bulalo was served with an East Coast Gewurztraminer 2017. It was a surprise because the wine, which is mildly sweet, went well with the mildly salty soup, and was excellent with the foie gras.

The Banderas Wagyu beef, this time slices of rib eye, was a perfectly medium rare with a whiff of thyme jus, baby bok choy leaves and marble potatoes keeping the steak company. A Merlot/Cabernet Private Bin 2015 from Villa Maria Hawke’s Bay had spice and plum flavors, perfect with the meat.

A refreshing pineapple cilantro granita with a foam of mint was the palate cleanser. Pineapple can be found everywhere in Tagaytay. The view from Anya is rows of pineapple fields when the fruit is in season.

Asked what it was like to work with ube, Bouthiaux said that he found it best to cream the purple yam at between 12°C to 15°C. Everything combined very well except for the wine, a Lighter Rosé Private Bin 2017 which was dry rather than sweet.

Anya general manager Mikel Arriet said that highlighting the produce of the place, the fruits and vegetables that grow well in Tagaytay’s cool climate, and even the prime beef, was a good program for the luxury resort. And it gave the French chef an opportunity to merge Filipino and French cooking, showing guests that the combination of cuisines can work.

The best way to enjoy a night at Samira is to stay overnight in a suite. A great welcome for us was a pineapple upside-down cake by pastry chef Neil Cabillos, a recipe of his grandmother, Lola Pasing, who learned to cook in the Home Economics class introduced by the Americans.