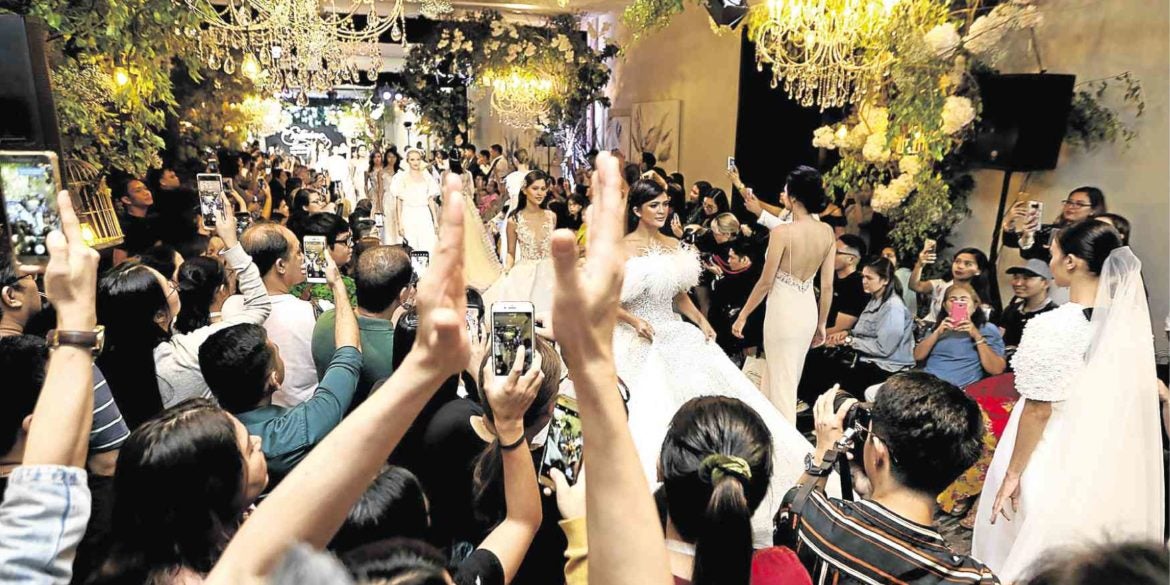 Full house at the 10th edition of “Face-Off”

2019 ‘Face-Off’: The Masters wowed, the Millennials held their ground

From indigenous embroidery to barely-there transparent fabrics, it was a jaw-drop moment, and today’s bride had her bewildering choices

The Masters showed how; the Millennials replied in kind.

The younger, less experienced designers want to hold their own against their seniors, while the veterans don’t want to yield turf, or are simply passionate about their craft.

So, over a fortnight ago, they all came bearing arms, er, sequins and crystals and tulle, and tussled it out on the runway, when Lifestyle, in partnership with Seda Vertis North, presented “Entwine 2019 Face-Off Bridal Edition.”

It was the second bridal edition and the second “masters versus millennials” concept of the annual event. As in previous Face-Offs, this show was directed by veteran fashion director Jackie Aquino.

In many of the nine younger designers, the effort to wow, and perhaps even shock, was evident in the heavy, show-stopping dresses with petticoats and kilometric cathedral trains, and see-through stretch tulle numbers that would make the priest blush, if they’d be allowed in church at all.

Owing to experience, the senior designers showed sang-froid in their designs, confident in their individual styles without losing that necessary measure of showmanship.

One of the night’s most memorable was Dennis Lustico’s, a feathered golden armor (micro-cut beads formed into discs) jacket paired with wide-leg champagne pants. Not your typical bridal wear, but then again, not every bride is your typical girl.

Efren Ocampo made a near similar look as Lustico’s, though in bridal white feathers; his other one had the millennial bride in mind, a pale pink satin number with a nude stretch-tulle top and strategically placed embroidery.

Mike dela Rosa’s was also in blush pink, but slinky like a nightgown, made for the nubile bride who has no unsightly bumps and lumps to hide.

So, you see, even the seniors can manage to shock.

Rajo Laurel’s two looks were both stunners—the first, a pale blue and black dress that had a chapel-length train featuring Bulacan’s cadenete embroidery; the other, a two-piece white number, which set off the multicolored enamel-flower embellishments.

Rhett Eala sent out two pieces, both featuring pleats and his signature hand-painting on the trains. Randy Ortiz’s were his typical feminine styles, one fully embroidered, the other unadorned but for its softly draped ball skirt.

Lulu Tan Gan’s were also both not your usual bridal silhouettes, a showcase of the handwoven piña fabric that she has been advocating for years, with rhinestone beads and Yakan insinuations. They had ankle-length full skirts and three-quarter sleeves with just the barest hint of skin through the sheer top—modest but also appealing and contemporary.

JC Buendia’s two looks were also studies in restraint. He sent out two simple sheaths, unadorned at the bottom but both sporting mini boleros—one with butterfly terno sleeves, the other a pearl-embroidered capelet.

While Cary Santiago’s two pieces have been seen in two other runways, they haven’t lost their wow factor. The bird-inspired pieces were a showcase of the Cebu designer’s couture techniques and flair for drama—a lesson on how to knock ’em dead without your bride tripping and breaking her neck.

But the young designers know their market so well, such that the classic princess-style dresses were aplenty—from Michael Leyva, Julianne Syjuco to Patricia Santos—just as much as the form-hugging stretch nude tulle looks—from Leyva, Mariella Garcia to Haydee Garcia, among others, fully embroidered or adorned with ostrich feathers.

Vania Romoff was a little more experimental with her pieces—one, a tiered drawstring skirt paired with a long-sleeved lace top; the other, a smocked, drop-waist style that was an homage to Princess Diana with its puffy sleeves.

The show ended on a poignant note, with the tribute to Cesar Gaupo, who was set to join “Face-Off,” but died in his sleep last January. Instead, three vintage pieces from his archive were shown on the runway to great applause.

Even in death, Gaupo showed how.