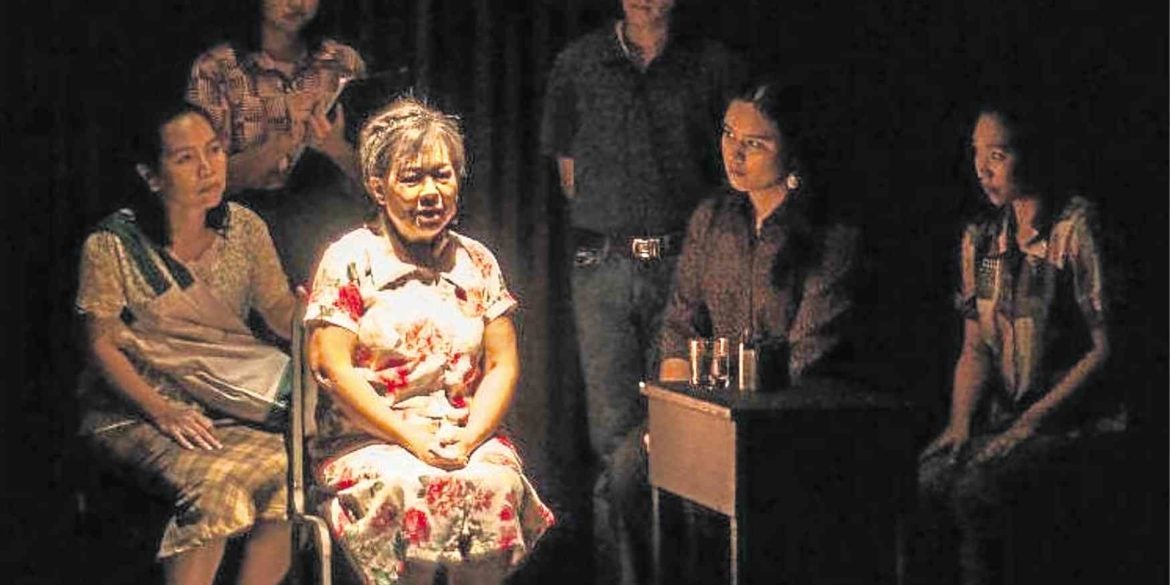 Peewee O’Hara and the ensemble of “Nana Rosa”

Since they surfaced more than 25 years ago, the tragic-heroic figure of Rosa Henson and the larger cause of World War II “comfort women” have been touchstones of historical conscience, not only for the Japanese perpetrators, but also for Philippine society, where the trauma went unspoken for a  long time.

Bringing such an iconic issue to life onstage can be problematic. Its larger-than-life monstrosity can make it difficult to render on a human, personal scale. And as the impact of the initial emergence recedes in time, its immediacy becomes harder to recover in an audience’s consciousness.

UP Playwrights’ Theatre’s “Nana Rosa,” using a script by Rody Vera and under Jose Estrella’s direction, strives to convey both the visceral reality of the atrocity and its pertinence to a present-day audience.

The first act, imaginatively framed as a dialogue between the memory-haunted, aged Rosa and her younger self, is a straightforward, if rather stretched-out, narration of her early life, culminating in the war and her abduction into sex slavery. The portrayal of the horrors of the ordeal is graphically realistic, but precisely because the extended rape scenes are enacted so clinically, viewer revulsion can be more numbed than truly cathartic.

It is, in fact, the elements in Rosa’s story beyond the physical violence which invest her ordeal with a more piercingly personal dimension: first, her fraught but genuinely affectionate relationship with her father; then, in the midst of her brutalization, a surprisingly tender connection with the Japanese Tanaka.

These episodes lend poignancy, suggesting both the possibility of humanity in the face of oppression (whether social or physical) and the ultimate futility of these palliative impulses.

It is in the second act, after Nana Rosa’s traumatic reliving of her past, that the play moves beyond narration, and the character comes into her own as an embodiment of tentative, conflicted, but finally self-affirming heroism. Here, as the titular character, Peewee O’Hara (alternating with Upeng Galang-Fernandez) fully delivers a sensitive and empathetic performance, strong and vulnerable at once.

No longer merely a victim, Nana Rosa dominates the story, transcending not only her horrific wartime experience, but the pressures of society that constricted her, before and after—the social conditions of her birth and upbringing, the role expectations of family and environment, the cynicism of society toward her self-exposure, even pressures from her well-meaning activist supporters.

Almost as key a performance is Krystle Valentino (alternating with Ingrid Villamarin) as the young Rosa, particularly in the first act, where her role was arguably more demanding. As the teenage victim of monstrous violence, shuttling between endurance of multiple rape and torture and the yearning for some form of love with Tanaka, she is heartbreaking.

The quartet of Task Force activists played by Bea Racoma, Camille Abaya, Iris Montesclaros and Abe Autea conveys the passion of a committed support group, though the roles as written are too sketchy for fleshed-out personalities, possibly a missed opportunity to lend greater complexity to the themes of the play. Also notable is Jonathan Ivan Rivera as Tanaka.

Under Estrella’s assured hand, the sometimes-meandering material comes into focus.

Key in the design is the use of background projections, whether cursive handwriting blanketing the walls or dramatically evocative photographs, which, together with the haunting lighting, ground the production even where the narrative occasionally flagged.

At the close of the play, the various elements cumulate in a powerful picture of one woman’s indomitable spirit, prevailing over all the historical and social challenges her long life threw at her. This is a story that should resonate in any contentious, memory-challenged time. —CONTRIBUTED