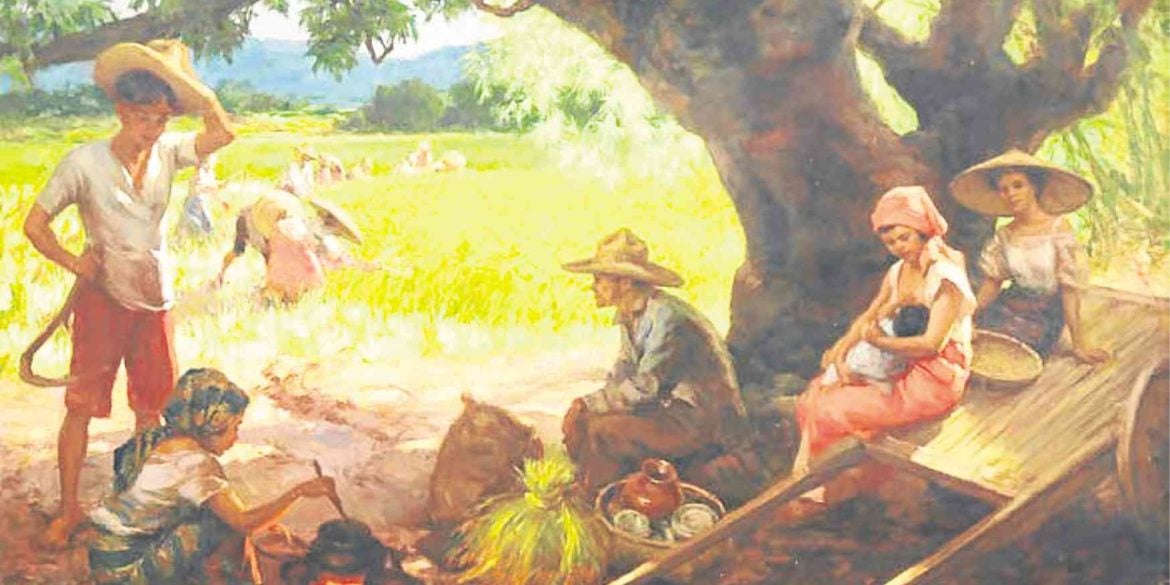 Amorsolo’s “Cooking Under the Mango Tree,” a 1946 work from the Tabacalera collection, sold for P23 million

Magsaysay-Ho’s “Sineguelas Gatherers” sold for P23,360,000, including buyer’s premium. It is a 1976 work showing her trademark iconography of female farm workers harvesting the native fruit. According to the catalogue, the artist endowed her favorite “rustic” figures with innate grandeur.

Sold for the exact same price is Amorsolo’s “Cooking Under the Mango Tree.” A 1946 work, it has found its way back in the Philippines after having been under the ownership of Tabacalera in Spain. The painting touchingly evokes the enchanted mood that Amorsolo saw in the prewar countryside, suggesting a rural arcadia.

Vicente Manansala’s “Ang Pulubi” (1979), a commentary on the world he lived in at the time—and certainly very relevant to this day—is a defining representation of the artist’s recurring “women in Church Entrances” theme. The work sold for P11,680,000.

Ang Kiukok’s “Twelfth Station: Jesus Died on the Cross” (1997), is one of four paintings from the late expressionist and national artist that sold in the auction. This particular work shows the duality of Christ as a tortured victim and an alienated public figure. Sold for P14,016,000, the work exudes emotional power.

Romulo Olazo’s “Diaphanous-B” (1987) belongs to a series in which the artist created translucent, gem-like manifestations of chromatic brilliance. This work, which was displayed at the Cultural Center of the Philippines as part of the “Olazo Large Scale” exhibit, sold for P11,680,000.

Two works by another master abstractionist, H.R. Ocampo, fetched high prices during the auction. “Clytaemnestra” (1970) presents a figure of a woman, barely discernable through the biomorphic shapes of his trademark shades, sold for P9,928,000 while a pair of untitled oil paintings sold for P1,284,800, four times as much as its starting bid.

Also sold for a considerable amount at P5,840,000 is the two-page handwritten defense statement of the first Philippine president Emilio Aguinaldo, in response to speculations that he had a hand in the death of Katipunan founder Andres Bonifacio and his brother Procopio. Aguinaldo claimed that he commuted the death sentence to exile but that the order did not reach his men.

Writer and historian Martin “Sonny” Tinio Jr. described the bed, aka as Calabasa, as perhaps the best-selling item Ah Tay made.

The umbrella stand and hat rack that was designed by Maximo Viola, childhood friend of Jose Rizal, fetched P443, 840. “The entire piece, of kamagong carved to resemble bamboo, must have been a conversation piece then as it is now,” said Tinio.