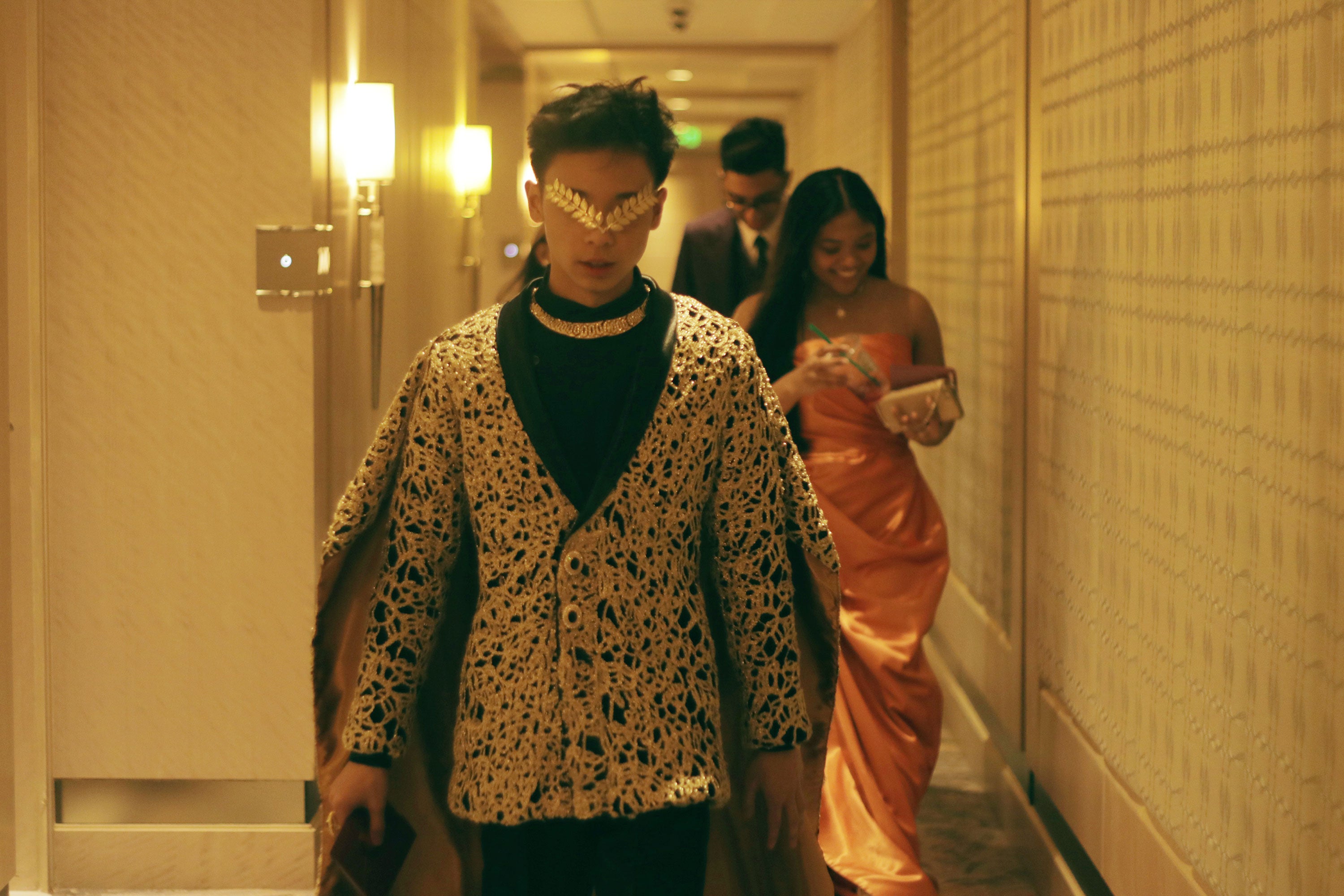 The cape, the nerves, and the story of how OJK’s Johan Ong won Best Dressed at prom

Johan Ong, the whiz kid behind cult streetwear brand OJK, just went to prom. For the unoriented, let it be known that Johan is as extra as extra gets. I’ve been with him once to the tailor’s to fit a neon green suit so bright it gave me both life and transient blindness.

A notch above the scale of extra, his prom look comprised a gold jacket with a shawl lapel, and a floor-length cape in the same brocade lace. Johan says it all began with Justin Bieber at the 2015 Met Gala, but he could also easily be a Roman emperor in a Shakespeare adaptation, or King Joffrey Baratheon if Joffrey was more into Balmain than bloodshed.

In the wake of that momentous night that was prom, OJK lives to tell the tale—of the cape, the nerves, and the village it took to get that look right.

“Before the school year had even started, people were already asking me what I’d be wearing to prom. Everyone knew I’m a designer, so it made sense why my schoolmates and teachers were so on-edge about what I was going to wear and who was going to make it. Needless to say, the pressure was on.

“I really had no idea where to start, but one thing was sure in my mind, I wanted to be shiny. Coming up with the design I was inspired by the vibe of Justin Bieber’s Balmain look at the 2015 Met Gala, as well as an Alexander McQueen look from Spring 2019. That’s really where the inspiration for everything began.

“The process of making the suit was exhausting, and I think I made it even more challenging for the tailors since I was always so indecisive. I had over 20 fittings and only by the sixteenth had I finally settled on the lapel of the suit. Finding the materials involved two weeks of running back and fourth from Market! Market!, Fabric Warehouse, Divisoria, and Greenhills.

“The entire look was comprised of velvet, gazar silk, charmeuse satin, and tons of lace. Many people ask about the cape, but that was never part of the initial plan. Two weeks into the suit’s production, the Golden Globes happened, and while scrolling through the red carpet photos I noticed Billy Porter’s look. He had a huge flowing cape made of pink satin. Then and there I knew I wanted a cape. I had been feeling something was incomplete and the answer was right in front of my eyes!

“It was midnight and my mom was washing the dishes. I ran to her with my phone and insisted that the fate of my look’s success was dependent on this cape. She initially didn’t even want to hear it. Convincing her was difficult because she thought it was too crazy. But nothing is ever too crazy when it comes to me! Also, it’s prom. You go big or go home.

“I had gotten jewelry only on the second day before prom. My mom found something incomplete with the look, and we found the perfect gold necklace, and another integral part of the look, a golden laurel wreath that I wore as a mask. The million dollar question throughout the night was, ‘Can you see with those?’, and the answer is, yes! But the view is obstructed by the leaves, I wouldn’t recommend wearing it while crossing the street.

“The days leading up to prom, I was nervous that my look wouldn’t be original enough. At the start of the school year I was already asking my classmates what they were planning to wear and they all showed me photos from the Met Gala. I was certain another guy would show up in a cape or an intricately beaded suit. Luckily my premonitions were wrong. I was the only person in a cape or in a suit that even had lace on it.

Nothing is ever too crazy when it comes to me! Also, it’s prom. You go big or go home.

“I think the common mindset among the guys in my school was that the only way to stand out with your prom look would be through color, or perhaps if you’re a little extra, some tassels, a floral or tartan pattern, and some jewelry. I wanted to prove that you can further stretch the boundaries of menswear in my school, not limiting it to suits and colored bowties, and I’d like to think that I did.

“Even though the outfit was on the center of my mind the days leading up to prom, on the night itself I wasn’t even thinking about what I was wearing, being in the company of my friends. In the end, I was just really happy to have an experience with my friends at a fancy hotel, looking all posh.

“When it was announced that I won Best Dressed, a sigh of relief fell on my shoulders because I knew my mom would be so proud. She worked tirelessly, day and night, exhausting all her communications with tailors, jewelry stores, and finding the materials, just to ensure I was happy with my prom look. She’s the true hero of how I ended the night with the Best Dressed sash around my neck.

“There will come a time when I’ve grown wiser and have succumbed to the natural processes of life, and I will sit with my future grandchildren by the fireplace and we will talk about our experiences, and I will show them the now dusty photos of my younger days. They will see my prom suit and from there on they will know… That they will never be as cool as me, because they’re sissies, and I won Best Dressed!” —As told to Jed Gregorio

CREATIVE LIVES: THE PHOTOGRAPHER IS AN EMPATH

Photographer Jack Alindahao on essential gear, opening his own studio, and lessons from shooting David Medalla’s portrait. By JED GREGORIO