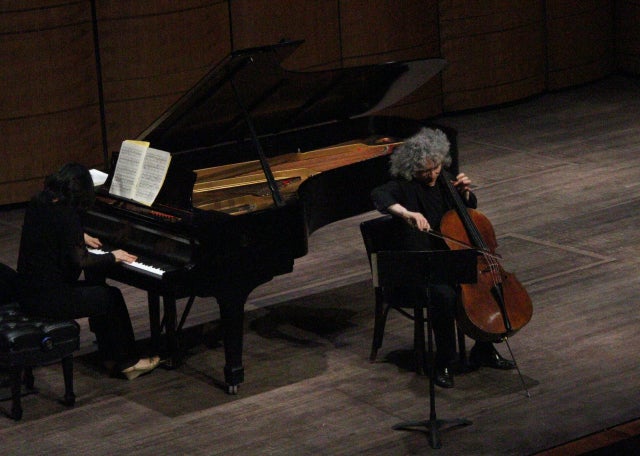 Music is riddled with stories of tempestuous affairs and unrequited love.

In a concert series, virtuoso British cellist Steven Isserlis is exploring the influence of love on music by contrasting three familiar pieces by male composers with lesser known ones by their traditionally underrepresented female muses.

“Women were not encouraged to compose. It was difficult,” the influential soloist said in an interview ahead of a performance at the Kennedy Center in Washington.

“They had to battle against the odds,” added Isserlis, pointing to the contributions of Amy Beach and Lili and Nadia Boulanger. “There are so many women composers now. Things have definitely improved.”

Isserlis’s program — whose next stop is Thursday in Kempen, Germany after five performances in the US accompanied by Canadian pianist Connie Shih — opens with his own arrangement of Clara Schumann’s “Three Romances”.

It is wistful music composed as her husband Robert Schumann grew increasingly ill, eventually committing himself to an insane asylum in 1854.

Schumann’s “Three Fantasiestucke” become profoundly meditative in the warm tone and rich bass of the 1726 Stradivarius that Isserlis plays on gut strings.

Perhaps no love story is as tragic as that of Vitezslava Kapralova and Bohuslav Martinu, who vowed to elope to America, only for Kapralova to marry someone else and die two months later of tuberculosis, in June 1940.

She was just 25, but already a promising composer and conductor.

Her only surviving “Ritournelle”, passionate and energetic despite being her last known composition, mirrors her teacher Martinu’s modernist innovations.

The piano and cello are almost locked in a duel in Martinu’s first Cello Sonata, composed as Kapralova was nearing death, after the Nazis occupied their homeland of Czechoslovakia and shortly before the Paris occupation.

French femme fatale Augusta Holmes captured the imagination of many of her contemporaries, chief among them Cesar Franck, 25 years her senior.

Isserlis played an evocative arrangement of parts of her cantata “La vision de la reine” — published in 1895, the same year she became the first woman to premiere an opera in Paris.

Its religious overtones echo those of Franck’s beloved sonata.

Despite featuring seldom-heard works by women, Isserlis insisted “it’s not a feminist recital.”

“You have to love the music. It’s got to be good music.”

“Let’s not overthink this… Study history, discover music that’s been overlooked and bring it forward to the present day,” she said. “It’s not rocket science.”

Although male-composed works predominate in the classical music canon, it’s not for lack of quantity or quality of pieces by women.

“A lot of these women in their own times were famous and were well-known and were played,” said violinist Laura Colgate.

“We actually have to go back and rewrite history.”

From 2014 to 2018, just 1.7 percent of pieces performed by leading American orchestras were composed by women, according to data compiled by the Baltimore Symphony Orchestra.

For the upcoming 2019-2020 season, the Institute for Composer Diversity’s survey of 50 orchestras found an increase to 7.4 percent.

Some groups have introduced corrective measures, though true progress may come when having women in these roles becomes unremarkable.

More than 150 music festivals have pledged to reach a 50/50 gender balance by 2022 under the international Keychange campaign, with women, transgender and non-binary people falling under the same category. Only nine of the festivals are American.

Colgate started her project a year ago with organist Joy-Leilani Garbutt to bridge that gap, with commissions, concert series and educational programs in the offing.

She says there’s a real thirst for this music, which could make the symphony more appealing to the general public.

While orchestras focus on the need to get new people in the audience, “that’s not actually the problem — it’s getting them to come back a second time,” said Colgate.

“There’s all of these expectations in the classical music world that make most people feel like outsiders. We’re trying to get rid of all of those labels and make anybody feel welcome.” CC