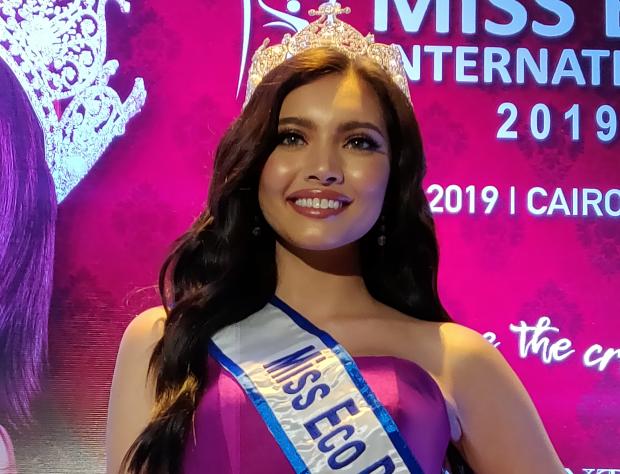 The current title-holder is Cynthia Thomalla, the Philippines’ first winner in the Cairo-based global tilt

QUEZON CITY — Maureen Montagne is very eager to wear the Philippines’ sash in the 2019 Miss Eco International pageant, which will take place in Egypt on March 29.

“As many of you know, I have competed in several pageants in the US — Miss USA and Miss World America,” she added.

She represented the state of Arizona in both pageants, which chooses the United States’ representatives to the Miss Universe and Miss World contests, respectively.

She earlier joined the Mutya ng Pilipinas pageant, representing the Filipino community of Arizona in the national competition in the Philippines. She was proclaimed first runner-up, bowing out to Koreen Medina and Angeli Dione Gomez.

Returning to the Philippines after her pageant run in the US, Montagne tried out for the Century Superbods competition, eventually bagging the top prize in the female division.

“Being able to compete in the international stage really does mean so much to me. And I can’t wait to wrap myself in the flag tomorrow,” Montagne shared.

She will fly to Cairo on Tuesday, March 12, where she will face over 80 other competitors vying for the title, which is currently held by Cynthia Thomalla, the Philippines’ first winner in the Cairo-based global tilt.

With the contest’s advocacy centered on the environment, Montagne prepared by working with different organizations. She is especially proud of her taking part in the cleanup of Boracay Island and of Manila Bay.

“We’ve made some great progress with that. But I think there’s still so much more we can do,” she said.

And to further prepare for her international gig, Montagne said she brushed up on her question-and-answer skills. She also made sure to keep her body in shape to be able to cope with the hectic Miss Eco International schedule.

“I made sure I’m in my best shape mentally, physically,” the beauty queen assured Filipinos. “I know I can win this for us.”

The Filipino beauty also asked for the support of the nation, especially through the social media component of the competition.

She is the last of the 2018 Miss World Philippines queens to compete abroad.

Alyssa Muhlach Alvarez and Katarina Rodriguez both went home empty-handed from their respective stints in the Reina Hispanoamericana and Miss World pageants.

Kimi Mugford finished in the Top 5 in the Miss Multinational contest. /atm