Roman-Shalani: This early, the wedding of the year | Inquirer Lifestyle ❮ ❯ 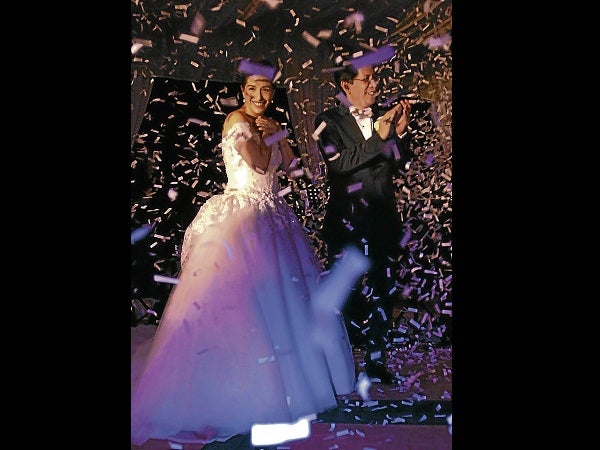 Roman-Shalani: This early, the wedding of the year

Everyone expected to witness the wedding of the year this early in 2012, and they got one even before Pasig Rep. Roman Romulo and Valenzuela Councilor Shalani Soledad could seal their union with a kiss last Sunday at the postcard-pretty St. Benedict Church in Sta. Rosa, Laguna.

From the classic off-shoulder Inno Sotto gown Shalani, 31, wore, to the simple yet chic white-and-green floral arrangements by Zenas Pineda, every detail had been carefully thought out to achieve a modern-day wedding rich in Filipino Catholic tradition—and photo opportunities.

The bride walked down the aisle 20 minutes behind schedule, but guests inside the church could catch a glimpse of her behind closed opaque-glass doors, the streaks of light from what seemed like a million flashbulbs effectively announcing her arrival.

Blessed with a gentle face and well-proportioned figure, the bride was a photographer’s dream. Her visage shrouded by a gossamer tulle veil with specks of beading that was nearly invisible, she wore a Kate Middleton-inspired gown with a lace bodice and 17 layers of tulle forming a semi-ballgown skirt.

Unlike Kate’s long sleeves, Shalani opted for cap sleeves to reveal her arms. Since it was an evening wedding, Sotto added a hint of glitter and appliquéd identical lace cutouts on the bodice to give it texture.

Apart from one of the 21 flower girls who refused to walk without her nanny, the wedding march proceeded without a hitch.

Shalani’s parents, Adolfo Aguirre and Evelyn Soledad-Yumol, walked together in the entourage, the first time they had been together in a long time.

It was the bride’s maternal uncle and her mentor in politics, Mon Soledad, who gave her away.

Shalani had been raised by her uncle and her mom’s immediate kin while Evelyn worked overseas. Aguirre never knew he had a daughter with Evelyn because the latter chose to keep it a secret from him all these years. It was only in 2010 when father and daughter met for the first time through the efforts of common friends.

The scion of the banking and real estate clan which owns one of the country’s biggest residential subdivisions (BF Homes), Aguirre had been invited to the wedding by the engaged couple themselves months ago.

“They asked me before the invitations were printed if she (Shalani) could put my name on it, and I said yes,” said Aguirre through good friend Louie Cruz.

And like any proud father, he was happy to see Shalani “fulfilling her dreams.”

“I can’t have any regrets because I wasn’t aware I fathered a child with Evelyn. When I reflect on this, I have to completely respect Evelyn’s decision (to keep his child from him),” he said.

The groom’s family, led by former Foreign Secretary Alberto Romulo and wife Lovely Tecson-Romulo, was into the wedding preparations and displayed their affection for the daughter-in-law.

In contrast to the palpable excitement that filled the packed church, the groom’s beautiful mother was a picture of calm and poise in a red gown.

Lupe, the eldest in the Romulo brood, had one simple but important wish for the couple: “Lots of children because Roman loves kids.”

Mons wished that the couple would have plenty of quality time together in the years and decades to come.

“I wish that the love they have for each other will be greater with each passing day,” she said. “And that they continue to give each other quality time and enjoy each other’s company. I also hope that they learn from each other’s experiences, whether good or bad.”

Long before Shalani became part of the family, the sisters had always admired her for her simplicity and mild-mannered ways.

“She’s soft-spoken and very proper, but I also learned later on that once she sets her mind on something, she’s also quite determined,” said Berna.

“Helping her prepare for her wedding made me get to know her better,” said Mons. “She was comfortable with herself and knew what she wanted, but was always open to our suggestions. She’s soft-spoken, but she’s also very articulate and intelligent. She really complements Roman’s personality.”

One rather minor but telling instance when Shalani stood her ground involved the inclusion of “dirty” ice cream on the reception’s menu.

While everyone, from lead wedding coordinator Marichelle Ligon of Bride’s Maids & Co. to Pineda, was lukewarm to the idea because of space limitations, Shalani insisted on including it.

At the reception, a sorbetero with a traditional ice cream cart was scooping ice cream made of fresh cow’s milk—a big hit among the guests.

The reception was at the Nuvali Evoliving Center, a multi-terrain outdoor sprawl carved around a man-made lagoon also in Sta. Rosa, Laguna, a hop away from the church.

For main course, caterer Florabel Co was inspired by the couple’s shared fondness for tapsilog, and came up with her own more expensive version consisting of roast US Angus rib eye with soy calamansi sauce served with mashed sweet potato and haricot vert.

Co whipped up a platter of desserts such as queso de bola cheesecake, suman latik with Batangas chocolate, and rice cake with coconut curds served with chocolate dipping sauce. Dirty ice cream straight from the ice cream man was optional.

Despite knowing what she wants, Shalani is also open to reason, said Ligon. She heeded, for instance, her wedding committee’s advice to have off-white canopies set up in case it rained. Fortunately, it didn’t.

“She and Roman originally wanted nothing that could impede the view,” said Ligon in an earlier interview. “But she eventually realized the wisdom of having the reception venue tented because of unpredictable weather.”

Chandeliers hang in the tents.

Erwin, the Romulo family’s youngest and one of Roman’s groomsmen, also attested to Shalani’s intelligence and probing mind.

“She’s very sharp and serious about her work,” said Erwin. “She and my dad get along quite well because they both love to talk about politics and government policy.”

Despite the SRO crowd inside the church, the ceremony was solemn.

Among the pop songs sung by Something Special band, the Bruno Mars original “Just the Way You Are” was a recurring piece—from the church to the reception. It was said to be one of the bride’s favorites.

The couple’s initial reluctance to have canopies set up was quite understandable. If solemnity reigned in church, a festive mood ruled the reception. A fireworks display, which must have lasted 10 minutes, signaled the couple’s arrival.

It would have been different had the outdoor wedding been held in the summer. Thanks to the cool January breeze, there was no need for air-conditioning.

Pineda, who collaborated with Sotto in styling the event, opted to spruce up each table with crisply starched white table linens to allow colored blooms such as lilacs, hyacinths, cabbage roses and lysantus to stand out.

“In keeping with the color motif, which is lilac, the color scheme is lilac with touches of green and yellow flowers,” she said in an earlier interview.

Celebrated cake maker Penk Ching did a multi-layered cake with drape- and lace-inspired décor that seemed to echo the bride’s lace wedding gown.

For the couple’s giveaways, Roman’s parents provided St. Benedict medallions blessed by His Holiness, Pope Benedict XVI. Half the number of the guests went home with the religious keepsakes, while the other half had pieces of dark chocolate in small bags, made especially for the event.

In his remarks before offering a toast to the newlyweds, the groom’s father shared with guests how his successor, Foreign Secretary Albert del Rosario, one of the couple’s principal sponsors, had been instrumental in planting “the seed that germinated and eventually led” to the union.

“More than a year ago when one day Roman met his ninong at the latter’s office, he said to Roman, seemingly out of the blue, rather emphatically, ‘you should meet Shalani,’” said Romulo. “Roman took the cue, picked up the ball and the rest is a fairy tale of love and romance.”

Romulo also shared his and his wife Lovely’s fondness for Shalani, whom they had welcomed into the family since the start of the whirlwind romance.

“When Roman first brought Shalani to our home to meet family members, we were all entranced, charmed by Shalani’s radiant beauty, her elegant simplicity and her endearing sincerity,” he said.

“Roman himself recalls how, in their very first meeting, he already liked her femininity, her dignified grace and how she looked shy, but underneath that exterior was a sharp, discerning intellect and a woman of calm dignity and purpose.”

Romulo also told guests of the time Shalani recounted to a friend that she knew Roman “was it” when he first went with her to Quiapo Church in August. The couple was engaged less than a month after.

“Roman and Shalani also started visiting other churches—Baclaran, St. Jude and Valenzuela,” Romulo said. “It was, in fact, in Shalani’s church in Valenzuela where Roman, professing his amore, gave her (Shalani) Lovely’s engagement ring and popped the inevitable question: ‘Will you marry me?’

“As Shalani joins our family, I consider myself blessed and quite proud that after five decades of marriage, there are now five good-looking and talented women in my life—Lovely, my wife; my daughters Lupe, Mons and Berna; and now Shalani, whom we all cherish and affectionately welcome.”