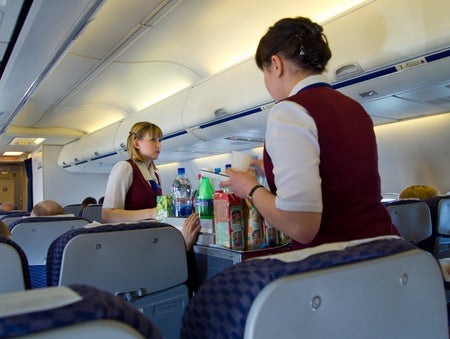 A woman with deadly nut allergy was forced to sit in a plane toilet when cabin crew ignored her requests not to serve nuts. This was after getting confirmation from the airline months back that no nuts would be served during her flight.

Twenty-five-year-old Laura Merry, a teacher from East Sussex, United Kingdom was on a Qantas Airways flight en route to Australia to visit her sister when the incident happened. As per The Sun on March 8, cabin crew informed Merry they would be serving almonds to passengers, thus placing her at risk of anaphylactic shock.

“Qantas Australia were made aware of my nut allergy months before my booking… however, when I boarded on March 3, the cabin manager’s attitude toward my allergy was awful,” she was quoted as saying. “She claimed she had no notes on my allergy and it was too late to make any requests.”

The cabin manager also did not make an announcement to passengers about Merry’s severe nut allergy. Instead, they gave her a mask to wear for the duration of the flight. She, too, was told by the airport manager and cabin manager not to board the Melbourne-bound flight, an option that Merry cannot choose to make.

“During the rest of my Qantas flight they gave me this mask to wear as the solution instead of just simply not serving the nut snacks or simply just supplying a snack with no nuts in,” she said. “This wouldn’t prevent an allergic reaction. I also sat in the toilet to escape everyone eating these snacks around me.”

Merry documented the incident on her Twitter on March 3, showing pictures of her wearing the mask during the flight as well as proof that the airline confirmed they would not serve nuts. As of this writing, Merry’s tweets have been deleted and her Twitter account deactivated.

Qantas cannot guarantee an allergy-free environment to their customers on-board or in lounges, as per their website. Instead, they recommend passengers to carry allergy medication with them in the cabin of the aircraft.

Meanwhile, an airline spokesperson has since stated that they would be getting in touch with Merry for her next flights. She still has two more flights with the airline in the next coming months, after all.

The airline also said that they are aware of the challenges allergy sufferers face.

“[Qantas] [takes] steps to reduce the risk for many of our customers particularly exposure to peanuts,” the airline said in the report. “But as there are a wide variety of allergies, it’s not possible to cater to everyone’s requirements.” Cody Cepeda/JB