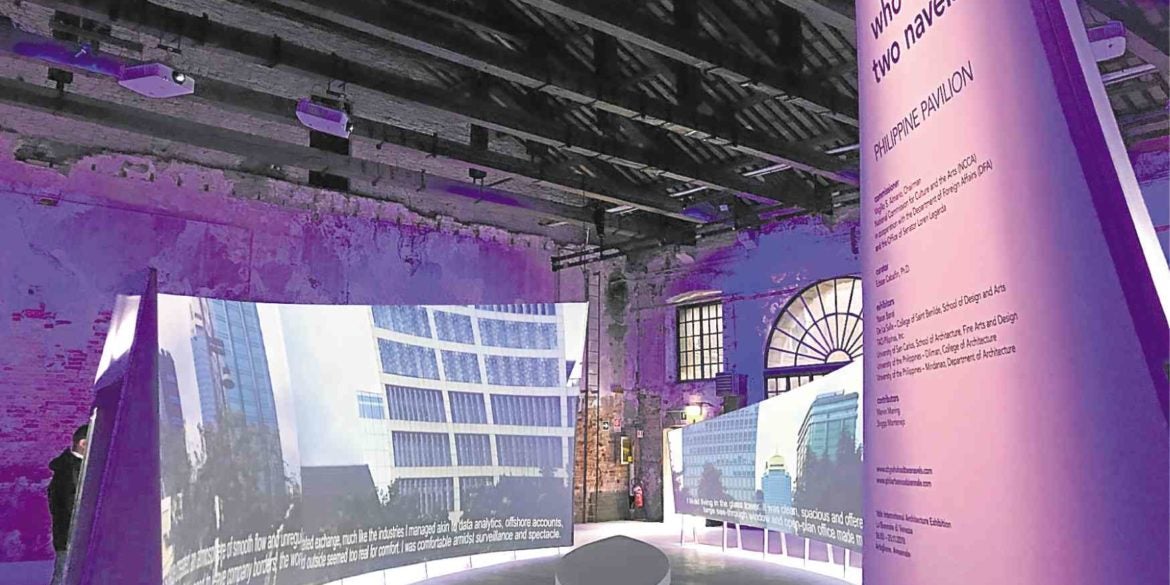 “The City Who Had Two Navels” by architect Edson Cabalfin at the 2018 Venice Architecture Biennale –IRENE C. PEREZ

An installation piece, “The City Who Had Two Navels,” which represented the Philippines at the 16th Venice Architecture Biennale in Italy, is coming home.

It will be on display at the Metropolitan Museum of Manila on June 20-Oct. 19.

Cabalfin was chosen by a panel organized by the Philippine Arts in Venice Biennale (PAVB) to interpret the theme, “Freespace,” assigned by Biennale curators Yvonne Farrell and Shelley McNamara.

“Freespace” was translated in Filipino as “Pookginhawa” by National Artist for Literature and Philippine Pavilion chair Virgilio S. Almario.

Founded in 1895, Venice Biennale (La Biennale di Venezia) is the prestigious organization that gathers the world’s top artists in one venue.

Sen. Loren Legarda led the reentry of the Philippines in the Venice Biennale’s art and architecture platforms in 2015—after 51 years—in cooperation with the National Commission for Culture and the Arts, Department of Foreign Affairs  and Department of Tourism.

At the exhibit’s finissage (closing ceremony) in November 2018 in Venice, Ambassador to Italy Domingo P. Nolasco said that the Philippines’ participation had elevated the image of the Filipino as a global artist, boosting the overall morale of nationals living and working abroad.

In his book, “What Kids Should Know About Filipino Architecture,” Cabalfin defines the subject as “architecture that responds to the needs, conditions, hopes and dreams of the Filipinos.”

“The City Who Had Two Navels” occupied a prominent spot at the Artiglierie of the Arsenale, a historic Venetian armory and shipwreck complex. Cabalfin created a clean, backlit pavilion to showcase Philippine architecture beyond bamboo and other indigenous materials.

“It is glowing; the iridescent installation provides a stark contrast to the dark exhibition space,” Cabalfin said. “Some online comments called it ‘too sleek,’ but I wanted it to stand out like a beacon to deliver a message of optimism.”

At first glance, “The City Who Had Two Navels” seemed simple: two double-wall, semicircle panels of videos and dioramas, separated by a white bench for guests to sit.

How can it define Philippine architecture to millennials?

(Familiarity with the book is not required, but it helps.)

The book discusses postcolonial, World War II anguish in Manila, while the installation addresses postcolonial anxiety of the present generation “who do not know how to fully ‘decolonize’ themselves.”

“Postcolonial anxiety is related to issues of identity,” Cabalfin pointed out. “There’s always a question on how Filipinos could deal with the colonial past in order to move forward.”

Colonialism and neoliberalism are huge concepts, so Cabalfin simplified them through panels symbolizing the two “navels.”

Visually, they were history lessons intended to guide would-be architects.

The first “navel” called “(Post)Colonial Imaginations” asks: “Can we truly escape the colonial?”

It shows archives from past expositions—from the 1887 Exposicion General de las Islas Filipinas in Madrid to the 1998 Expo Pilipino in Clark—in which the Philippines was consistently portrayed as “exotic and primitive.” The exhibits were temporary, but the dated and condescending narrative lived on. The short answer to the question is, no, we can’t truly escape the colonial, but our image must be updated.

‘Malls as the new plazas’

“Neoliberal Urbanism” is discussed in the second “navel” which tackled the question: “Is neoliberalism a new form of colonialism?”

Cabalfin referred to neoliberalism as “the political and economic policies focused on free market, free trade, competition and deregulation with minimal state intervention.”

Malls have become the new plazas, noted Cabalfin, how public spaces are being “privatized” and “militarized.”

“These establishments are open to the public but they have security guards who have the power to exclude people. Is it really a Freespace, a Pookginhawa?” he asked. “Are we losing public space, which is a right of the city dweller?”

“Freespace advocates architecture for humanity, and ‘The City Who Had Two Navels’ reminds us that Philippine architecture is for the Filipino people,” Cabalfin said. “It should be more inclusive, humane and empowering.”

Having the exhibit in the Philippines would be Cabalfin’s call for “a democratic design, which can only happen if the government, institutions and individuals work together.”