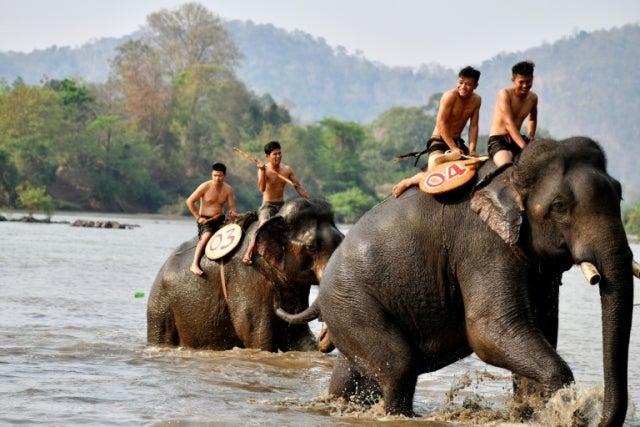 Mahout Y Hoi Bya sits atop his elephant, whacking him with a large stick to urge him toward the finish line at the Buon Don race in Vietnam’s central highlands.

Locals say the race is a celebration of the much-revered animals — traditionally thought of as family members in this part of Vietnam — but conservation groups are calling for an end to the festival, which they say is cruel and outdated.

Normally held every two years, the Buon Don elephant festival, a major tourist event, features football matches, swimming sessions, a parade and a buffet for the animals, topped off with a highly anticipated race on the event’s final two days.

Y Hoi says his animal’s past successes in the popular race has earned him and his pet pride of place in his village in central Dak Lak province, home to many of Vietnam’s surviving elephants.

“He often wins first place in the running competition in Dak Lak,” said the 38-year-old, who started caring for elephants as a young boy.

His elephant’s pre-competition routine involves a regular diet of bananas and sugarcane to ensure its strength, Y Hoi, from the Ede ethnic minority group, told AFP.

It appears to have worked: he rode his elephant Kham Sinh to victory, beating out 10 others for the top prize of $130.

The festival drew hundreds of cheering spectators as well as animal activists who say the elephants shouldn’t be forced to work long hours under the hot sun, and then beaten with sticks during the race.

“That is one of the highest levels of animal cruelty, especially because it’s entertainment,” said Dionne Slagter of the NGO Animals Asia.

She was happy to see fewer elephants take part in this year’s festivities — just 14 from dozens in years past — but hopes authorities adopt a more ethical approach to animal tourism in the future.

More than 80 elephants in Vietnam are still kept in captivity, usually used for elephant rides, backbreaking work that has rendered most infertile today.

The 100-150 wild elephants have also shown little promise of boosting their numbers.

The festival left some spectators like Vu Tran Minh Anh with mixed feelings.

“I didn’t think elephants could do so many things like play football, run and swim,” the student told AFP.

“But I do feel sorry for the elephants.” NVG