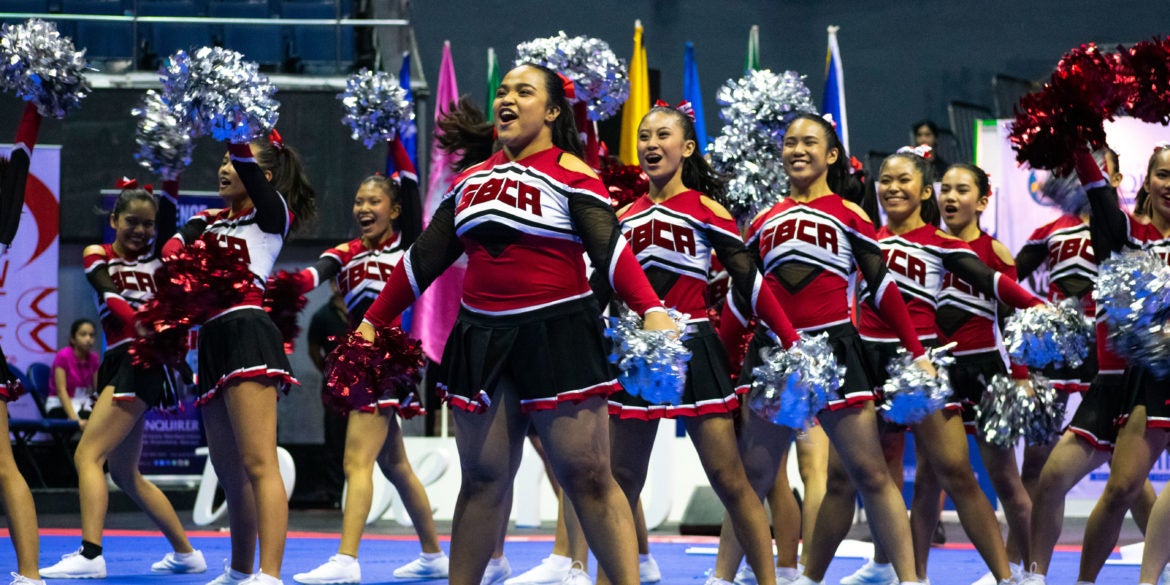 How does one become a cheerleader? Does one have to fit a certain image or stereotype?

As San Beda Alabang’s Junior Red Lions team captain Edgael Galimba, 16, has happily realized, one doesn’t have to be a typical cheerleader. In most people’s eyes, she doesn’t look like one—she isn’t reed-thin or even slim.

When she was in Grade 6, she remembers a cheerleader coming up on stage to invite students who want to try out for the cheerleading squad. “I stood up and asked if I could be one despite me being fat,” Gaspar recounts. “She told me that I could, and she eventually recruited me.”

Lose weight
A teacher came up to her and said she should lose weight because cheerleaders are sexy and skinny. “That night,I cried because it broke my heart,” says Gaspar.

The next day she saw a bunch of girls laughing at her and said she would never be a cheerleader because she’s “fat.” She was not discouraged. Galimba joined the cheerleading team in high school. In Grade 10, she became team captain.

“I knew she already had a voice in the team and that everyone looks up to her,” says cheerleading coach Ajjie Mendelebar. He described her as “intense,” and not intimidated by older teammates.

Teammate Ashley Gail says, “Edgael is always patient with the team even though we are stubborn at times. She never loses faith and tells us that everything’s going to be okay and worth it in the end, even if
we aren’t able to do the stunts she always wanted for the competition.”

A driven team captain, Galimba constantly motivates her team. “She’s beyond dedicated,” says teammate Francesca Asido. “And through her love of the sport, we, her teammates, have truly been captivated. She
makes us love cheer life deeply and makes us understand the values and lessons that we bring
in our cheer life.”

One of Galimba’s proud moments was during the opening of the 49th Women’s National Collegiate Athletic Association (WNCAA) Cheerleading Competition, presented by Inquirer Lifestyle’s To be You and To be Ultimate, at Smart Araneta Coliseum on March 9. Galimba led the San Beda Alabang contingent as flag bearer.

The team captain beamed with pride as she and the team were introduced amid the roar of the Bedan crowd and the loud beating of the San Beda Alabang drums.

Her team, the last to perform in the high school category, had a clean run. “We became emotional after, and we even cried because our goal wasn’t to win but to give our school a routine they’d be happy about!”

Galimba says. Not expecting anything, the team was caught by surprise when it was named first runner-up in the juniors division. St. Paul College Pasig was named champion in the juniors category.

Galimba made a shoutout to the people who supported her early years as cheerleader: “I dedicate this one to you!”

Addressing one of the former cheerleaders, Valerie Pagdagdagan who recruited her back in Grade 6, she posted on Facebook: “You’re one of the alumnae who gave me the knowledge to stay strong.” What’s next for Gaspar?

There’s no rest for her and her team, as they prepare to fly to Takasaki, Japan, in May to compete at the Cheerleading Asian International Open Championships and Asian Junior Cheerleading Championships, where
they will represent San Beda Alabang and the Philippines.

When she graduates junior high, she won’t be hanging up her pom-poms just yet. She will continue being a #BedanCheer-leader—a hashtag popularized by the Bedans of San Beda Alabang—in senior high school.

Though she won’t be team captain next year, she will still be a strong figure in guiding her
team, hopefully to winning the WNCAA Juniors Championship title after 10 years.

Galimba looks back at the time, in Grade 6, when she was ridiculed for trying out to be a cheerleader. She realized she had outgrown that moment: “Four years have passed and now I’m the person I wanted to be. I led my team to victory.” INQ