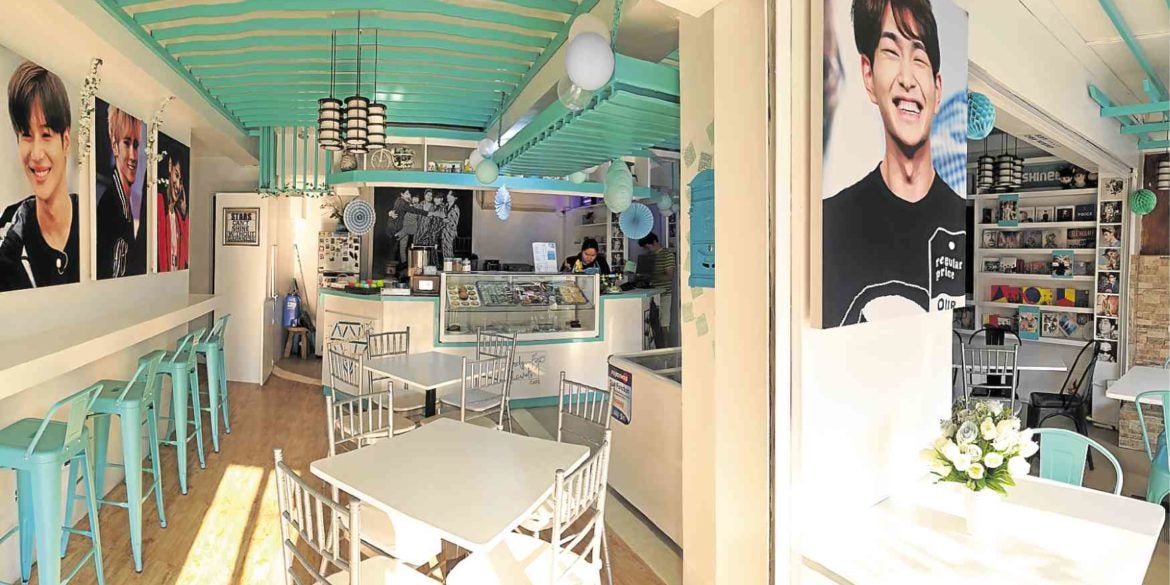 Sincerely,Shawols Café is not just a new K-pop hangout place to visit in the South.  It is an ode to fandom love.

Shawol is the fandom name of the South Korean boy group SHINee. The members are composed of Onew, Jonghyun, Key, Minho and Taemin.  They debuted 10 years ago under SM Entertainment.

The logo of the café features the hand sign of SHINee holding a cup.  The sign is supposed to make the perfect diamond shape. Diamond is the icon of the group.

The café’s exterior is painted pearl aqua (the color is close to teal). The glass windows are stained with elements from SHINee albums of different eras.  Super spotted “Odd,” “Married to the Music,” “Everybody,” “1 of 1” and “The Story of Light.”

The shade of Pearl Aqua continues in its interior.  A portrait of Onew welcomes visitor as soon as they step inside.  The café’s owner Larizza Camille Pasao admits that SHINee’s leader is her bias.

The left side wall has the portraits of Taemin, Key and Minho.  They hang above a bar and high stool chairs. Take a few steps further and you will find Jonghyun’s in a corner, right next to the canvas with his words, “Even though we can’t communicate using the same language, we use music instead.”

“Most of the decor that you see is things that I’ve collected through the years.  I buy Pearl Aqua items when I see them. Some of them have been inside boxes for a long time,” she said.

On the other side is a feature wall that has white shelves that displays the groups’ physical albums and television that plays SHINee videos.  Camille collected the albums through the years and she chose to share it to those who visit her café.

She said that the inspiration for the wall is the SHINee section in the SMTown Museum in Coex Artium, Seoul.  She even took out pages from the albums to show its content.

“I wanted visitors to see what’s inside the albums that’s why I posted them up,” she said.

There is also a fan-made portrait of Jonghyun on the top shelf.  Its creator asked Camille if she could leave it with her while she waits for the opportunity to give it to Jonghyun’s sister. Jonghyun passed away two years ago.

The idea for the café came to her after she got her degree in Multimedia Arts from Mapua University.  She and her cousin talked about a place they would want to relax with other Shawols in.

“We really had no plans to put it up this year.  It’s just that I created a Twitter account which I didn’t know was not set on private.  I posted an artwork that my friend made that says ‘Brewing Soon.’ Ate Bunny [Javier] (@Peenkheels02) retweeted the post and it got a lot of mileage online.  That’s how we decided to push through with it,” she said.

READ: The Super Guide to SHINee

Her parents supported the crazy idea right away.  The perfect spot was found by her dad while everybody else in their family pitched in by finding sources for the recipes and the equipment needed in the store.  They also help out by manning the store whenever Camille is working as a full time digital artist in a company in Ortigas.

She said that she used her savings since college to put the café up.

“Except for the tickets that my parents bought for my first SHINee concert, I always used my own money to go on trips abroad and watch SHINee concerts.  I did not buy food at school. I brought my own baon and I only spent my allowance for the commute,” she said.

The 25-year-old artist has been a fan of the group since 2011.  She also creates her own fan arts and posts them on Twitter (@moonrapbit).  She turns some of them into pins that visitors can buy online or at the café.

Camille said that the menu reflects the kind of food and drinks that she likes. At first glance, the choices appear to be hodgepodge.  But a closer inspection will reveal unpretentious and comforting offering. They offer food you crave when you watch K-drama.

They have iced drinks priced between P70-P85.  Order Blueberries and Cream if you want something with a tinge of blue for the ’Gram.  Milk teas are also available and priced between P85-95.

Super found the coffee exceptional.  The freshly ground beans give a nice aroma.  Its bold flavor has a hint of butterscotch. An Americano is at P70 a cup. Drinks are served on a polygonal pearl aqua tray.

The café is located at 9014 Jakar  Building, Buhay na Tubig Rd., Palico IV, Imus, Cavite. It is expected that they source it from one of the best coffee producers of the country —Amadeo, Cavite.

But every Kpop and K-drama fan knows that watching shows can make you crave for noodles.  They offer Kimchi Ramen (P105), Cheese Ramen (P95) and Jjajangmyeon or black bean noodles (P95) served in small tin pots with chopsticks.

Camille said that she will soon extend the menu to offer five combos that will be named after the five members.  She also plans to host special  events for the group’s anniversaries, birthdays and other milestones.

READ: 10 Things you need to know about Jonghyun

The store is open from 11 a.m.-9 p.m.  At any point, expect Shawols to drop in, settle down and spazz on the videos of SHINee that they’ve already seen. Expect to hear  giggles and laughter as their biases come on screen. There is a happy atmosphere as the overjoyed visitors go around to take selfies.  And if one group spazz loud enough for the other to hear, expect that that they will soon be talking to each other.

The crowd is thinner during weekdays and it is possible to get a a seat and table.  The café currently has 27 seating capacity but more will be added soon. If you went there to make friends with fellow Shawols and found the place empty, you can talk to the barista and whoever is behind the counter.  They are also certified Shawols.

“I want Shawols to have a place where they could meet and hangout. And I want them to get to know each other. I really want that we all get together so a solo SHINee concert in the country will happen,” Camille said.

How to get there via commute: Take a bus to Imus, Silang or Dasmariñas.  Tell the conductor that you will get off at MCI. Get off at Millenium Plaza Building, Aguinaldo Highway.  Cross to the other side and take the trike to Sincerely,Shawols Café. It is right after Alfa Mart.