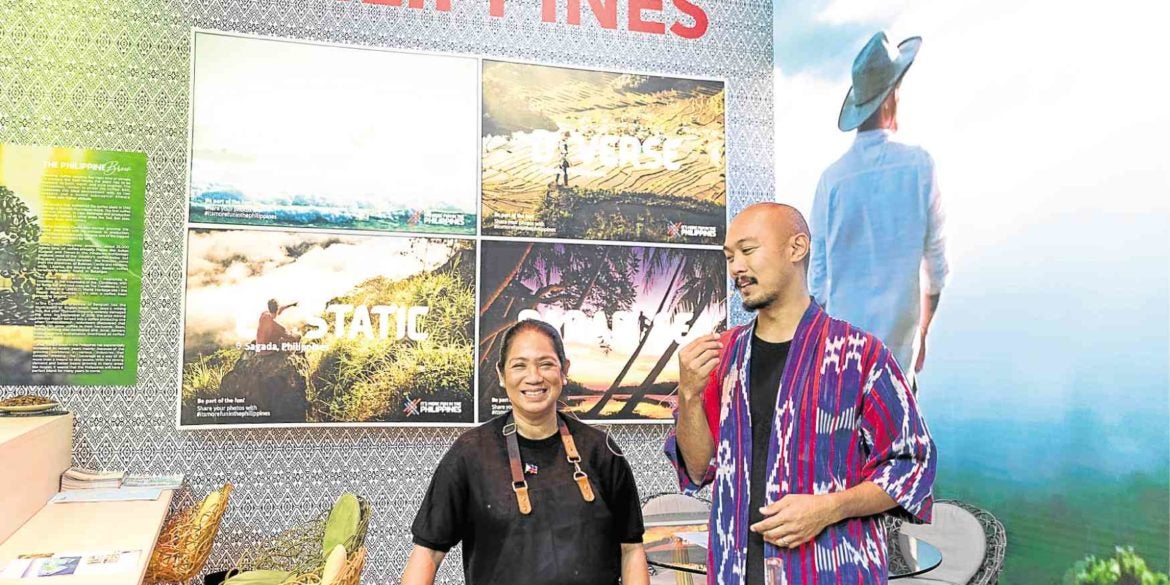 At the world’s largest annual travel show in Berlin, Germany, Filipino talents help put the country in a positive light

Kenneth Cobonpue designed the 254-square meter Philippine booth, which he decked with his famed Yoda, Dragnet and Parchment chairs.

The negotiation area was set against a virtual reality wall of El Nido to simulate the feeling of being on the beach.

The booth was like a manor compared to the 30-sq m tarpaulin-filled version Forés manned when she represented the Department of Agriculture in other trade shows, said Tourism Secretary Bernadette Romulo-Puyat. “We just made up for it in quality!”

“ITB Berlin is of great importance, particularly in times of widespread uncertainty,” said Dr. Christian Göke, CEO of Messe Berlin. “Even in a digitalized world, it is not possible for high-tech communications to replace face-to-face meetings and a direct exchange between business partners on issues concerning the global industry represent. That is why ITB Berlin functions.”

The Philippine booth highlighted global Filipino personalities—Forés, Cobonpue, and Cosio and Samonte of El Union Coffee in La Union—with a video wall. “When these three talk about food, coffee and design, you experience the country in three steps,” said Puyat.

“If you go around ITB, each country has its gimmick,” said Jose Clemente III of Rajah Tours. “Anything that can drive traffic to the Philippine booth is welcome.”

Cobonpue said visitors are always touched by the authenticity of the designs: “They get curious. The style is not Western. Berna insisted on selling Philippine design because it’s a product of artisans. It’s an experience.”

Members of the media were served pili nuts, and sampler plates of laing, crab fat heirloom rice, sisig and chicken inasalitos and bulalo in shot glasses. Forés explained the provenance of the ingredients.

Samonte prepared espresso beverages, using beans from the Cordilleras and Mindanao, while Cosio made his pitch about the Philippines. The coconut cappuccino, made with arabica, robusta, desiccated coconut and homemade coconut syrup, and the mocha with Davao chocolate were the unique beverages.

“They’re as good as some of the finest coffees in the world,” said Samonte.

Near the food counter, the wall was lined with images of the Philippines by Jeremy Jauncey, creator of the Beautiful Destinations account with over 12 million followers.

The ITB  pavilions were organized according to regions and market segments, such as wellness or business travel. The industry also acknowledges that the LGBT community is one of the fastest growing markets. The growth potential includes centennials (born after 1995) and LGBT families. A pavilion was dedicated to this market; the Tourism Authority of Thailand even heralded its campaign, “Go Thai Be Free.”

Thailand dominated the Asian pavilion. Cambodia recreated the façade of Angkor Wat. At the Indonesian booth, people lined up for a traditional shoulder massage and its famous coffees. Korea held a cooking demonstration for  bulgogi, kimchi and bimibap.

Puyat, wearing a Zarah Juan jacket, beaded in Lake Sebu, conducted successive media interviews with high energy. One of the most thought-provoking conversations was with Adrian Pickshaus, editor of Lufthansa Magazine of the German carrier. Germany is the second largest European market in the Philippines.

He told Puyat that the fate of German tourists was splashed all over the German and international media in 2017, when a German couple was killed by the Abu Sayyaf, in Mindanao.

“We would like to change that perception,” said Pickshaus, adding that readers were interested in culture and human interest. “Sustainability is also big among Germans.”

In interviews, the topic of sustainability was raised, citing the government’s bravado in closing  Boracay for a six-month rehabilitation in its peak season.

Despite the closure of the country’s crown jewel, the country still posted a new record of 7.1 million tourist arrivals, a 7.6 percent increase as foreigners discovered other destinations such as Palawan, La Union, Siargao, and Pampanga.

Between interviews, Puyat spoke with hoteliers and tour operators. “They said that in the past, there was nobody at the booth on the morning of the first day,” she said, “but since this morning, they couldn’t keep up with the inquiries.”

Travelers today are seeking new places, among them the Philippines. The demand for new experiences resulted in more foot traffic.

Clemente observed the improvement in the quality of the buyers. “In the past, many of our talks were merely exploratory. Now we are getting people who are intent on selling the Philippines to their customers.

“The campaign slogan ‘It’s More Fun in the Philippines’ piques their curiosity. When they visit the country, they realize it’s the people who make it fun.”

Margaret Ongshu, president of Travel Experts Inc., said wholesalers, tour operators and outbound agents did their research on the Philippines.

“If tour operators want to be specialists in Asia, they need to add a new Asian destination. The Philippines is worth giving a try,” she said.

Most Philippine tour operators offer a two-week package that Westerners will enjoy—a taste of Manila’s cosmopolitan life, the heritage sites in the provinces, and, finally, the beaches.

“In our classic 15-day tour, tourists start with Manila, then we bring them to the Spanish section of Vigan, the Cordillera Rice Terraces, Palawan’s Underground River, Bohol’s Chocolate Hills and the beaches, and Cebu with its history,” said Ongshu. “Every destination is different.”

Of the ITB experience, Cosio said his takeaway is the growing awareness of the Philippines in a positive light.

“People don’t realize that the Philippines has much to offer. We have many facets that make us unique. We just have to be ourselves.” —CONTRIBUTED