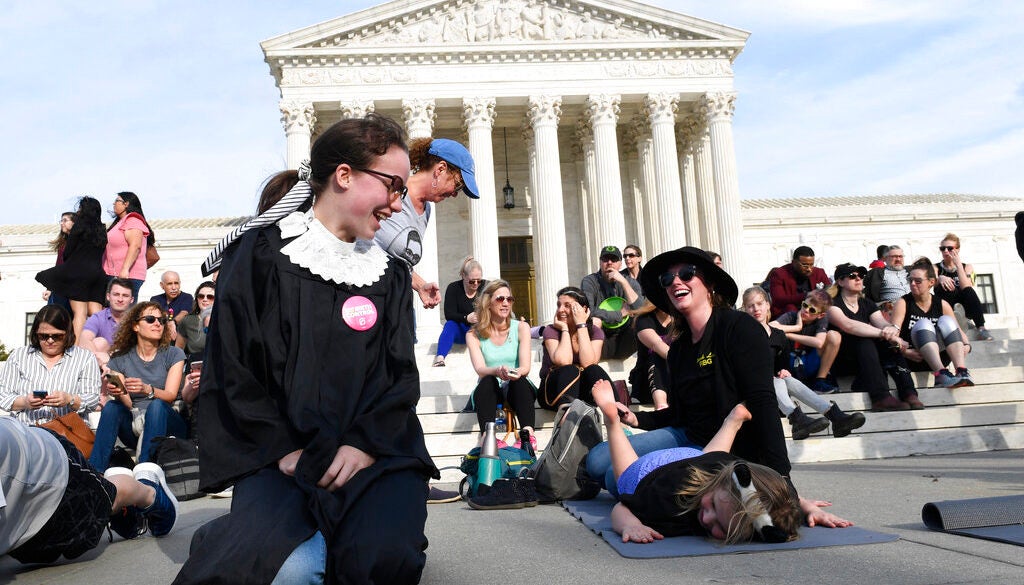 Alice Wisbiski, dressed as Supreme Court Associate Justice Ruth Bader Ginsburg, is joined by others as a group do exercises on the steps of the Supreme Court in Washington, Friday, March 15, 2019, to celebrate Ginsburg's upcoming birthday 86th birthday. Image: AP Photo/Susan Walsh

The court’s oldest justice has become known for her workouts, which include push-ups and planks. The justice has worked out on camera with “Late Show” host Stephen Colbert, and footage of her workout routine was also part of the 2018 documentary “RBG.” A book about her workout by her longtime trainer came out in 2017.

On Friday evening, fans dropped to the ground on the sidewalk outside the court and sang “Happy Birthday” while doing the plank. Ginsburg’s trainer, Bryant Johnson, led the exercise. He said Ginsburg had worked out Thursday night, and she told him to tell the crowd that for the first time since she underwent surgery for lung cancer in December, she has “been able to do the planks the correct way and the push-ups.”

Ginsburg’s son James joined the crowd. He said the justice’s plans for the evening included dinner out with family. Earlier, the justice was treated to “lots of desserts,” made from recipes by her late husband, Martin Ginsburg, he said.

Ginsburg’s workouts have helped her regain her strength after two previous bouts with cancer — colorectal cancer in 1999 and pancreatic cancer in 2009. She was absent from the court in January as she recovered from her most recent surgery. Doctors have said there is no evidence of any remaining disease.

There were Ginsburg-linked celebrations elsewhere, too. In Brooklyn, where the justice was born, Democratic Borough President Eric Adams marked Ginsburg’s birthday with a cake and a rally as part of his campaign to get the city to rename the Brooklyn Municipal Building for the justice. And in Missouri, a rehabilitated bald eagle named RBG was released back into the wild.

Ginsburg was at the high court Friday for a regular private conference of the justices and was likely serenaded by her colleagues. Chief Justice Warren Burger, who led the court in the 1970s and ’80s, began a tradition of having wine, a toast and the singing of “Happy Birthday” on justices’ birthdays.

“Truth be told, most of them can’t carry a tune,” Ginsburg has said of the singing. NVG