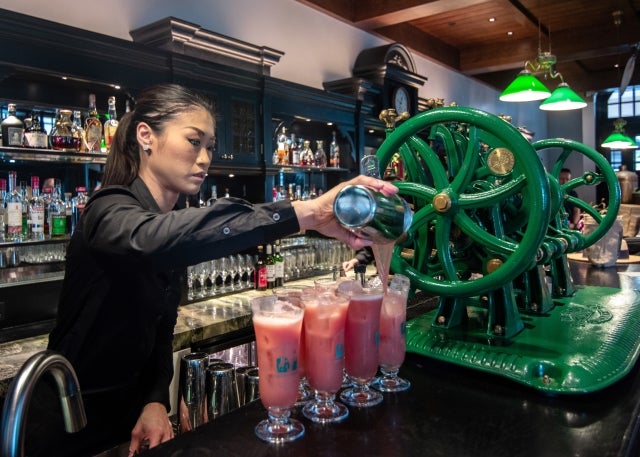 This photo taken on January 25, 2019 shows a bar staff preparing the "Singapore Sling" cocktail for customers at a bar in Singapore. Image: Theodore LIM / AFP

Singapore Sling refreshed: Shaking up an old cocktail for a new generation

The Singapore Sling is being shaken up in the city where it first caused a stir as mixologists pour new life into a drink in danger of being dismissed as something solely for the tourist trail.

The distinctive pink, gin-based drink has long been a favorite with visitors to the colonial-era Raffles Hotel, where it is served in the historic Long Bar.

A stalwart of cocktail menus and sometimes dubbed Singapore’s national drink, it has nonetheless struggled to capture the attention of a younger generation spoilt for choice with a buzzing bar scene offering everything from trendy craft beer to artisan vodka.

It is still made from the same recipe, including gin, cherry liqueur, pineapple juice and bitters, but uses superior ingredients which the creators say make it better suited to the modern palate.

The Long Bar recently reopened to the public after renovations — part of a broader overhaul of the entire hotel — and it was decided the Singapore Sling also needed a revamp.

The cocktail was first created in 1915 at the bar, which was a hangout for British colonialists and rubber planters visiting from neighboring Malaya.

At the time it was socially unacceptable for women to drink in public but the Singapore Sling — so colorful for the era that many believed it was fruit juice — gave them a chance to have a sneaky tipple and quickly became a hit.

Creators hope the updated version will extend its appeal beyond visitors to Singapore’s local and expat workforce.

But in a recent trip, the bar was still packed primarily with tourists, many of whom were happy to sample the new version of the classic cocktail.

British tourist Bridget Stevenson said: “Lovely texture and lovely drink, and I love the experience of being in here.” NVG

10 most popular cocktails ordered at bars around the world

Cocktails for ‘Game of Thrones’ fans