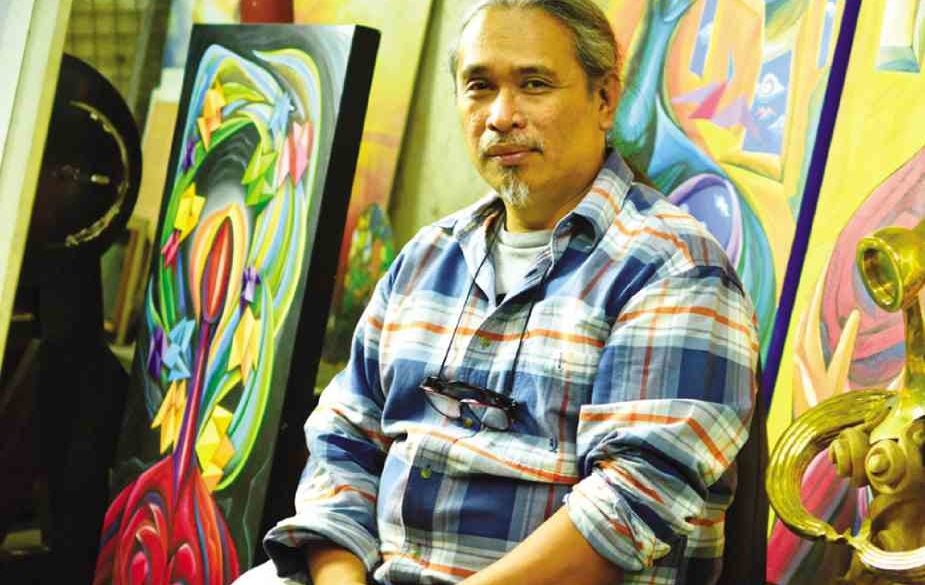 Contemporary art derives its power and dynamism not only from its quicksilver ability to adapt, to reflect, and to comment on the restless character of the times, but also from its instinct to take advantage of tradition and innovate it.

In the Philippines, the exemplar may come from the Cordilleran North, with its ancient visual/spiritual  tradition, as evinced, for instance, by the monumental-plexiglass bulul, or granary god, sculptures of Ronald Ventura.

It may also come from the Muslim South, exemplified by the high-spirited art of the multimedia artist Toym Imao.

Imao’s father, the late Muslim artist Abdulmari Asia Imao, achieved renown for incorporating traditional motifs—such as the okir, the sarimanok and the naga—into  contemporary art. Indeed, he received the Ten Outstanding Young Men award (TOYM) and much later the National Artist Award  for his achievement. Marrying Grace de Leon, an art dealer from Pampanga, he later named one son, Toym, in commemoration of his achievements as a young man.

Now, in an affectionate nod to his parentage, painter-sculptor Toym Imao presents “Ima/Ina” at Galerie Anna.  Both native words mean “mother,” in Kapampangan and Tausug, respectively.

In Toym’s paintings and sculptures  emerge the various motifs so beloved by his father, teeming with the florid and brightly colored arabesques, with their rhythmic linearity and foliate forms subtly and elegantly limning images of the Mother and Child, consistently attuned with the energies, vibrations and modalities of the new century.

Toym trained under National Artist Napoleon Abueva. Impressively his career now spans over 30 years, during which Toym has carved his own distinguished name in sculpture.

Distinguished by masterful craftsmanship, architectonic strength  and historical depth, Imao’s works can be found in the major cities of the Philippines, Vietnam, the United States and Europe, counting among his achievements such historical monuments as the Andres Bonifacio in Maragondon, Cavite;  Tandang Sora Memorial Shrine in Quezon City; Cordillera Freedom Movement in Baguio City;  and  Dr. Jose P. Rizal statue in Carson City, California.

In the transfigured art of Toym Imao, the richness of tradition and the  temper of contemporary times triumphantly merge in a manifest celebration of that most classic and beloved of Filipino artistic themes: the Mother and Child.—CONTRIBUTED

Galerie Anna is at 4/F, The Artwalk, Bldg. A., SM Megamall, Mandaluyong City.