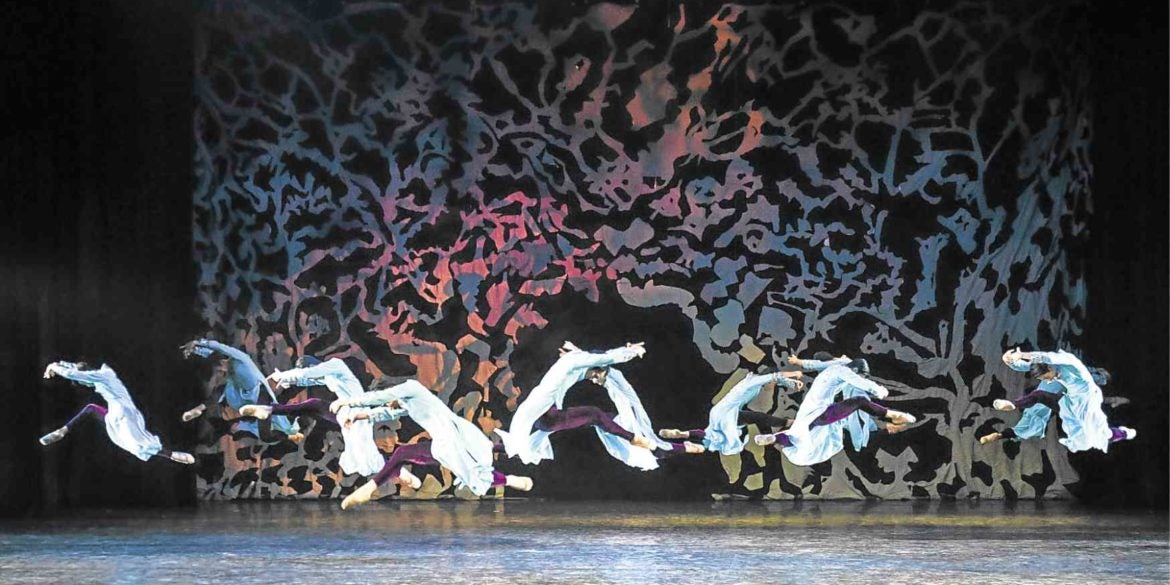 Ballet Manila has always been consistent with its high-energy approach. –PHOTOS BY MARBI PHOTOGRAPHY

Ballet Manila’s (BM) season ender recently has made a dramatic statement: that after 23 years, it has extended its range—from the ethereal style of the Romantic era to the virtuosity of the Russian Imperial style and the complexity of contemporary dance.

The title of the closing recital, “Deux (Two),”   referred to the classical and contemporary repertoire which  predictably focused on pyrotechnics.  Except for the all-male “Aramica” by Bam Damian and a male solo from “Giselle,” the themes centered on boy-meets-girl with fireworks dancing.

“La Bayadere”  featured Akari Ida as Gamzatti and Joshua Enciso as Solor, dancing with bravado.  In “Flames of Paris,”  Rafael Perez impressed with his controlled turns and attentive partnering to Sayaka Ishibashi. Alvin Dictado was meek in  “Albrecht’s Variation.”

Generally, the danseurs created more impact on the audience as they leaped and whirled with abandon.  Although their partners had the strength to hurdle the difficult movements, they sometimes caved in to nerves, resulting in uneven performance.   Moreover, we felt as if the couples were dancing for a competition instead of telling a narrative since the pieces were excerpts from story ballets.  Give these dancers time to mature and more opportunities to repeat these pieces, they will develop the savvy to make their performance more compelling.

BM has a right to brag about “Chopiniana” (which was retitled “Les Sylphides” in 1909). It was originally choreographed by Michel Fokine in the  Romantic style, characterized by feather-light, rounded arms; evaporating limbs;  the forward angle of the body and the lilted head.  The ensemble work was crucial to the choreography because the corps had to  react to the Poet and the Muse and female soloists and the changing moods of Chopin’s nocturne.

The corps floated on stage with immaculately drilled precision, showing off their  radiant classical lines. Their most striking quality was the mesmerizing synchronized breathing.  The breath support for movement, which makes dancing more expansive and expressive,  is rarely seen even among principal dancers.   The ensemble’s breath  in dance made them more fluid and refreshing to watch.  Joan Emery Sia’s mazurka and pas de deux was sylphlike, rapturous and delicately phrased.

Damian’s choreography of “Aramica”  echoed the percussive, repetitive and folkloric strains of  Soviet composer Aram Il’yich Khachaturian.   The male corps was vibrant and fearless.  The lead,  Kiyosawa, who was a last-minute replacement of injured soloists,  danced with full-bodied and panther  grace.

The audience related at once  to “Winding Road,” British choreographer Martin Lawrance’s homage to the Beatles.     The choreography enthralled with its youthful vitality, combining balletic correctness with unexpected moments of  hip-hop and technically demanding jumps that landed with rolls on the floor.

All told, BM has been consistent with its high-energy approach. It continues to evolve by coming up with exciting repertoire and building up a variety of young dancers. —CONTRIBUTED