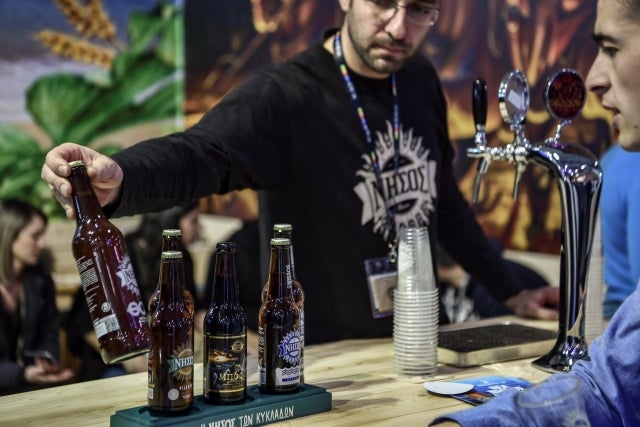 People visit Greek microbrewery kiosks during an exhibition near Athens on February 8, 2019. The microbrewery sector has experienced an awakening in Greece, where demand was traditionally higher for wine, mass-produced beers and ouzo, with producers further spicing flavours up with ingredients such as honey, cardamum and mahaleb. Image: AFP/Aris Messinis

Bucking the crisis, Greek microbreweries bubble to the fore

Bent over a barrel, Greek microbrewer Sophocles Panagiotou lovingly draws a measure of his Septem Red Ale into a glass cylinder and expertly transfers it to a glass.

A decade ago at the start of the financial crisis, the chemistry graduate and former winemaker took a chance on building his Septem microbrewery in a family field on the island of Evia, some 200 kilometers (120 miles) east of Athens.

“It was a crazy idea. At the time, they looked at me as if I were an alien,” Panagiotou told AFP, in his fully-automated factory and bottling plant, which now produces 12 different beer labels.

Tens of thousands of small and medium-sized enterprises were obliterated by the economic crisis in 2010 that brought Greece to its knees and sent unemployment soaring.

But the microbrewery sector managed to grow amid the ruins, as local products benefited from a fall in imported goods.

Greece had fewer than a dozen breweries 10 years ago.

Today, there are 45 microbreweries, said Panagiotou, recently elected president of the Union of Greek Breweries, which represents both micro and bigger firms.

“Habits changed during the crisis,” says Yannis Kefalas, a beer enthusiast and brewer.

“Demand is now centered on local products as a way to help the Greek economy.”

“They are all so different, depending on the region they come from,” he enthused.

Three years ago, Kefalas decided to quit Athens and relocate to his home island of Ikaria, where he opened his microbrewery, named Ikariotissa after the island.

He now exports to Germany and aims also to tap markets in Sweden, Canada and the United States.

Given that Greece is more commonly associated with wine and spirits and does not have a major beer culture, the rise of microbreweries is perhaps even more surprising.

The country consumes and exports wine and there is also strong demand for traditional alcoholic beverages such as ouzo and tsipouro.

Greece is among the bottom three beer consumers in the European Union, with an annual average of 35 litres (74 US pints) drunk per person, just above France and Italy.

While microbeers are becoming more popular, the most widely consumed beers are produced by Athinaiki, one of Greece’s biggest breweries.

It makes more than five different brands of mostly lagers and imports around 10.

On Evia island, Panagiotou says that his production has increased 15-fold over the past decade, from 80,000 bottles in 2009 to 1.2 million this year.

Yannis Marmarellis, a brewer from the northern city of Serres, has experienced a similar growth spurt.

Opening his microbrewery, Siris, in 2014 after his meat factory shut down, he has increased his staff from three to 14 and quadrupled the size of his facilities.

“There is an increase in demand for quality beer,” says Christos Vassiliadis, one of many Greeks who began with a home brewing kit before graduating to a full brewery.

But producers say that several factors are holding back further growth, including bureaucracy, an habitual Greek bugbear.

They also complain of high taxation and a legal framework dating from the early 20th century.

After Finland, Sweden and Britain, Greece has the highest tax on alcohol in the European Union.

And outdated laws on beer production mean there is no legal provision covering beers made with spices or in fruity flavors — an area some microbrewers are exploring.

“I come from the wine industry so I like to try various flavors,” says Panagiotou.

His products now include beer with honey, ginger, cardamom and mahleb, an aromatic spice from the seeds of the St Lucie cherry, a special version for cold Christmas nights.

The hops for his beer comes from his father’s fields, just behind the factory.

“The microbeers are a welcome change in terms of range of both choice and taste,” said Craig Morrison, a British long-term resident of Athens. CC